It’s wonderful when you eat somewhere off of your bucket list and the experience lives up to expectations, isn’t it? During dinner on Wednesday evening, I finally understood what the big deal is about Russell Norman and Florence Knight. Yes Russell Norman has created some great London restaurants that people love, but before I’d only eaten in Mishkin’s. I loved the decor, concept and had a lovely lunch there with only one niggle (my mashed potatoes were a little dry), but I filed it away as somewhere good, but nothing that stood out against any other restaurant I love in London. As for Florence, I love her cookbook. No, scrap that I adore her cookbook. One cook and her cupboard was my favourite cookbook of 2013 which I have already cooked an awful lot out of, but a cookbook is just a cookbook. I literally own hundreds of them. 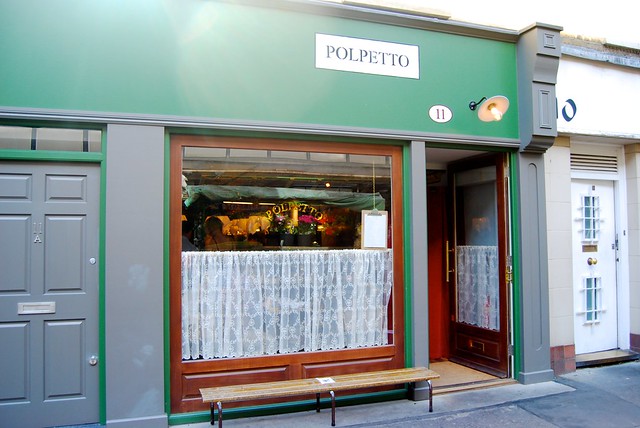 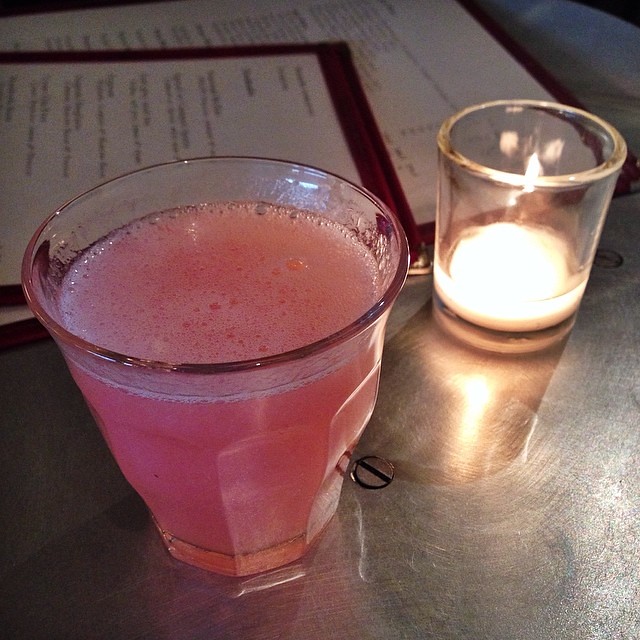 Polpetto is one of those London restaurants that are famously no reservations, but very very popular (all Russell Norman’s joints are except for Mishkin’s), and as Alessandra and I don’t mind eating early we’d planned to meet there at 5pm. I’d been soaking up the sun and shopping on Regents Street as I had a free afternoon in the city, so I arrived a little early and treated myself to a pre-supper (you can’t really call it dinner before 7pm!) cocktail while I waited. I had the seasonal bellini, which was made with a rose and rhubarb puree. You could not taste the flavours individually, but it was a lovely little drink with a very unique flavour, perfect to enjoy before dinner.

I love the feeling of a restaurant when you’re the only customer sitting in there at the bar, when all the staff are gearing up for service, but before all the rush begins. You can feel the energy and the anticipation building, but you can also get a feel for how much of a team the staff are in their interactions with each other as they’re polishing glasses and making sure all the menus are ready. A lot of people don’t always realise all the hard work, energy and precision that goes into their favourite eateries, and getting there early is a good way to get a feel for that. Another bonus for me sitting there early with my cocktail was Florence Knight, the head chef (if you don’t own her brilliant book, you might recognise her from Hugh Fearnley-Whittingstall’s great programme from a few years ago, Hugh’s Three Good Things, you can still find it on 4oD?) was sitting in the front of house with her staff going over pricing for the menu before she headed downstairs and into the kitchen. I love the way that living in Los Angeles I could be queuing for groceries behind really famous actors without blinking an eyelid, yet I got very nervous and fan girl telling a chef I admire how much I enjoyed her book! 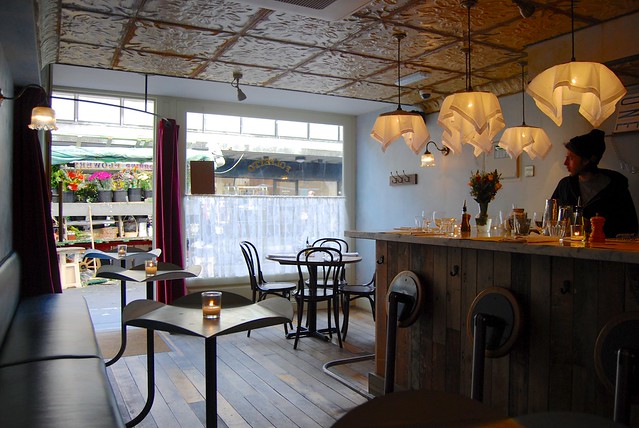 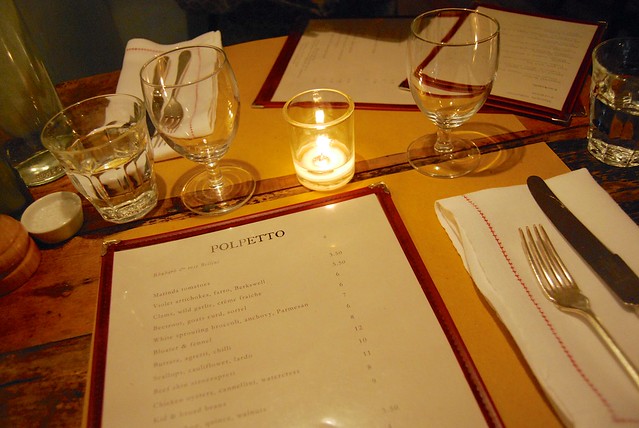 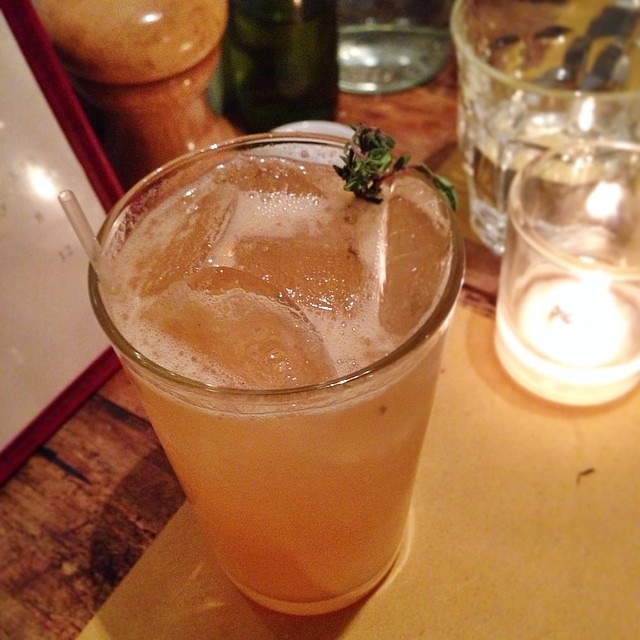 Once Alessandra had arrived and we’d sat down at the table with our menus, before we started the monumental task of narrowing down which of all the amazing sounding dishes we were going to order, I went for another cocktail off of the list, the Earl Grey Iced Tea with Lemon & Thyme, which was spiked with vodka, and has to be one of the very best cocktails I’ve had in London for a very, very long time. You could taste all the flavours distinctly, and it was very well balanced; both sweet, herbal and tart at the same time. It reminded me of the Thyme Infused Homemade Lemonade I developed for Birchbox last Summer, but so much better. Something that I will be working on trying to recreate for my Cocktail section this Summer! 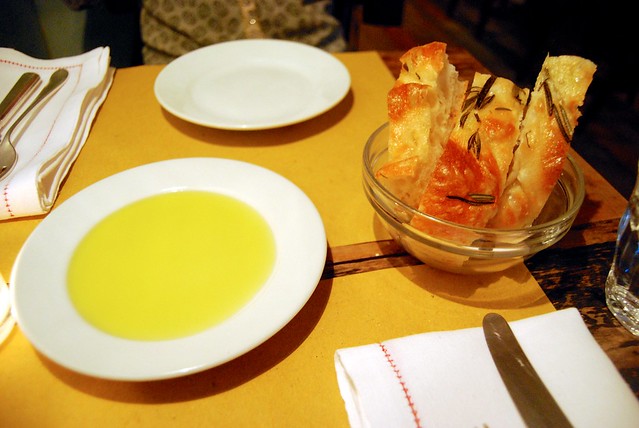 To start while we waited for our food we were brought a bowl of the house homemade foccacia which was light and more-ish and a dish of some rather excellent olive oil for dipping that was poured for us at the table. We sprinkled just a little bit of sea salt into our respective sides of the oil pool before diving in and anticipating our first dish. 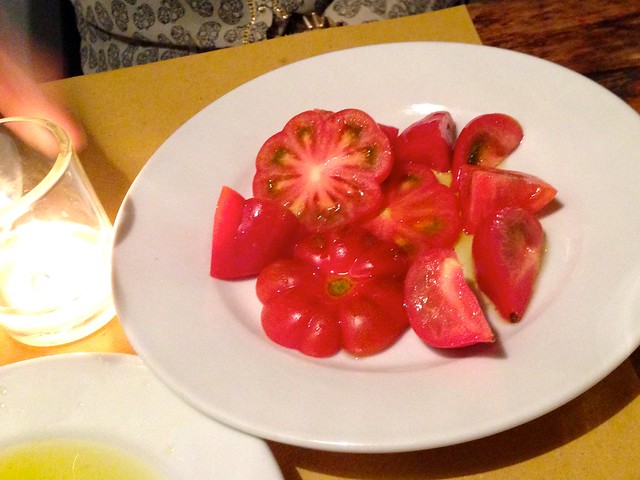 We just started with a simple tomato plate. Mouthwatering, olive oil dressed tomato chunks with just that little something else that really made such a simple plate, and left us both guessing. The staff at Polpetto are so friendly and knowledgable, and when asked about the dishes they wanted to discuss ingredients, provenance and preparation. It turns out the special ingredient was just that perfect amount of sea salt. Something else I loved about the service, was that they asked you how you found the dish when they were taking the empty plate away, not while you are eating it, interrupting your meal and your conversation. 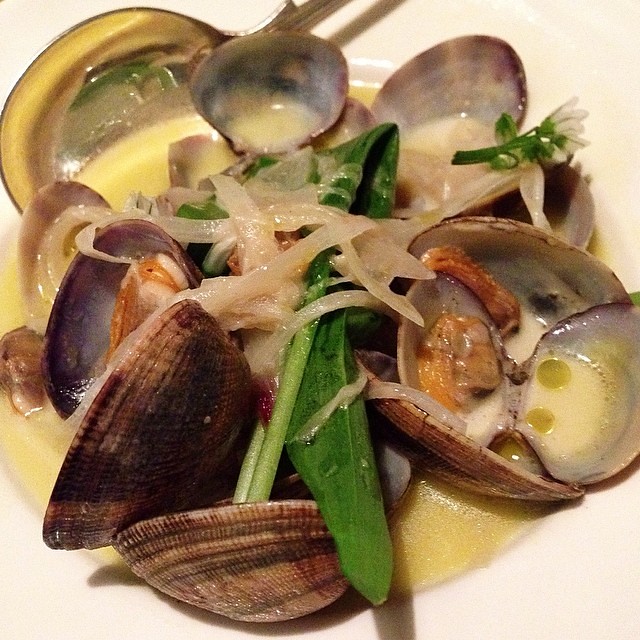 Next up was the dish that we were the most impressed by, were the clams with wild garlic. They were perfectly tender and delicious, the wild garlic was full of flavour but not at all overpowering, and the broth it was all resting in was so good that we used the empty shells to scoop it up into our mouths. 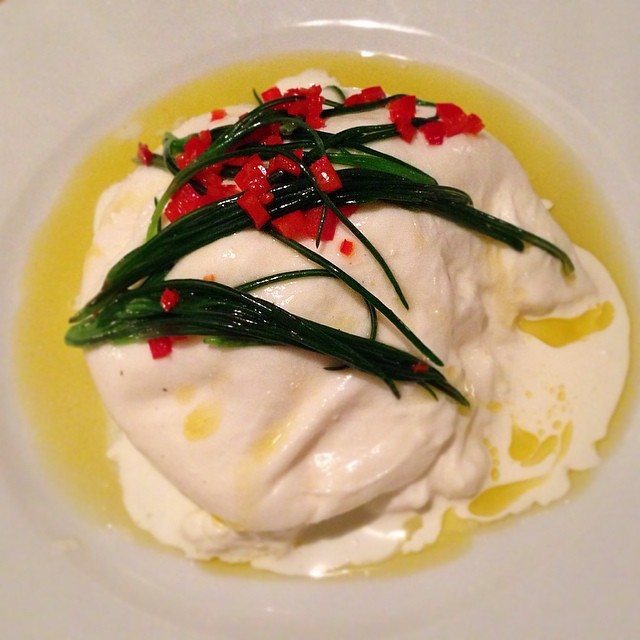 Next, we had the much talked about Burrata plate, which, while being pretty simple and not really involving much skill on the part of the chefs, but it still blew me away. I totally understand the hype. Imported from Italy, unlike most Burrata you find that is just slightly creamier than you’re average good quality mozzarella ball in the middle, this cheese is thick, creamy and oozy in the middle, and makes you close your eyes in enjoyment with every bite. I have never had a cheese like it, and I was telling anyone and everyone about it for days afterwards. Seriously, if you’re planning on dining at Polpetto, this is the dish I’m telling you to order. 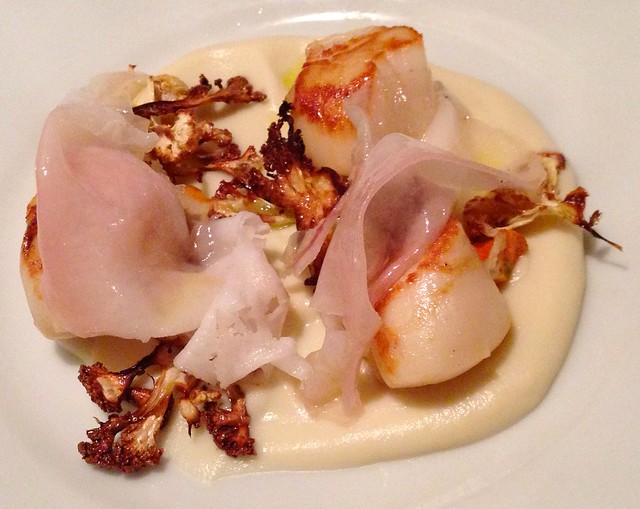 We also had the scallops with lardo and charred cauliflower. The scallops were sweet and perfectly cooked, and I was excited to try the both meaty and deliciously fatty (in a good way) lardo, as I’ve read a lot about it but never had the opportunity to try it until now. The dish was good, but not so much that it really blew us both away. However, I was a massive fan of the charred and crispy cauliflower slithers. They were so full of flavour with the perfect amount of crunch without being too crispy, they were something I’d write home about. 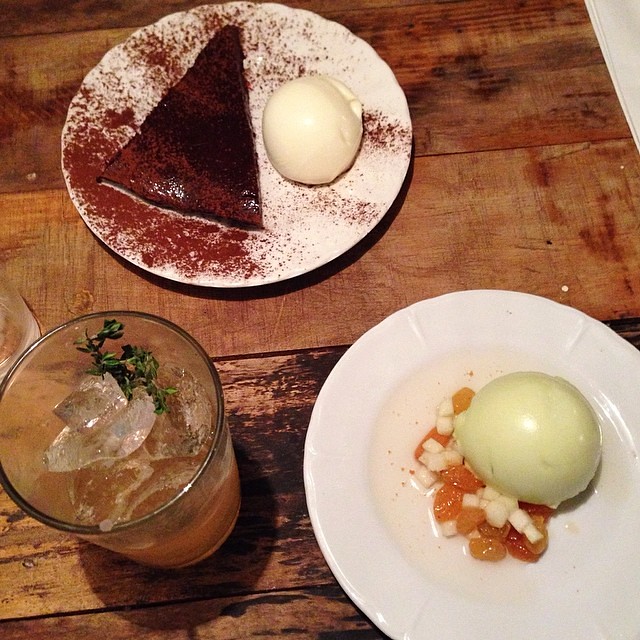 Desserts, which we both shared really were something special. Polpetto is another one of those restaurants in Soho that I’d love to go to for cocktails and dessert after dinner elsewhere. Let us start with the Green Apple Sorbet served with green apple cubes and sultanas soaked in, and the whole dish swimming in a pool of mead. I love mead anyway, so I was down for all of the trimmings, but the sorbet was cool and zingy on the tongue, and perfectly caught the crisp green apple flavour. I want to keep a vat of this in my freezer.

When was the last time you went to one of your bucket list restaurants? Where was it and how was your meal? Now I’m spending a bit less time in London I want to make more of some of the places I eat: some big ones I’ve had on my list for a while now and I want to make more of an effort to get around to are Duck & Waffle, Honest Burgers, Blanchette and Sticks ‘n’ Sushi. 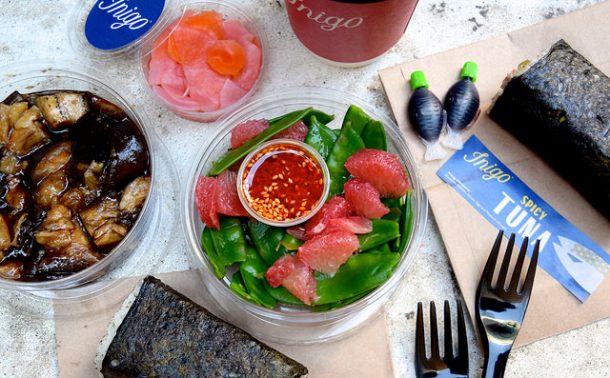 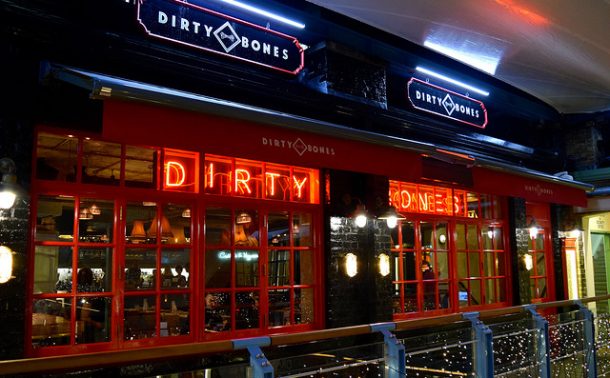 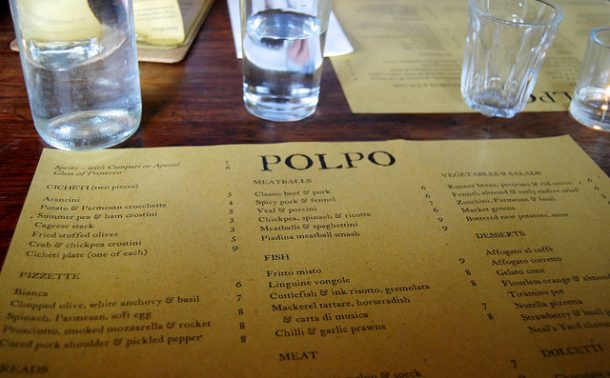 Eating Out Places To Eat In London: Polpo, Notting Hill