In case you missed my snapshots on Instagram, I spent the weekend in the La Rioja region of Northern Spain with the winemakers Campo Viejo harvesting grapes, touring their winery and micro-winery and generally eating and drinking all the region has to offer in excess. While I have a few more travel and foodie posts I’ve got planned to share with you all (including two very fantastic, but very different Michelin starred restaurants) but I want to kick things off today with our miniature wine harvest and working in Campo’s micro-winery. Lunch out on the terrace and a tour of their winery proper will follow, along with lots of tapas and sunshine! 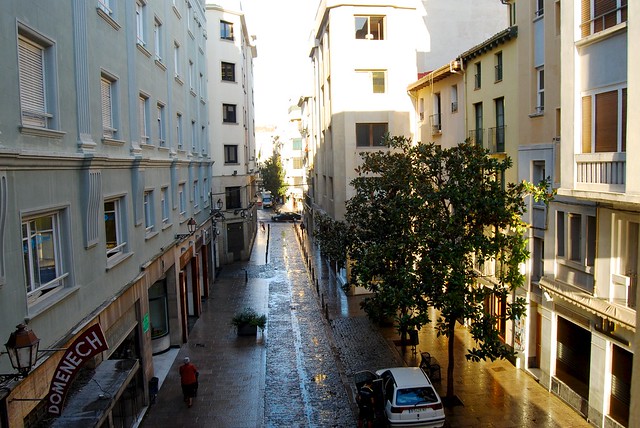 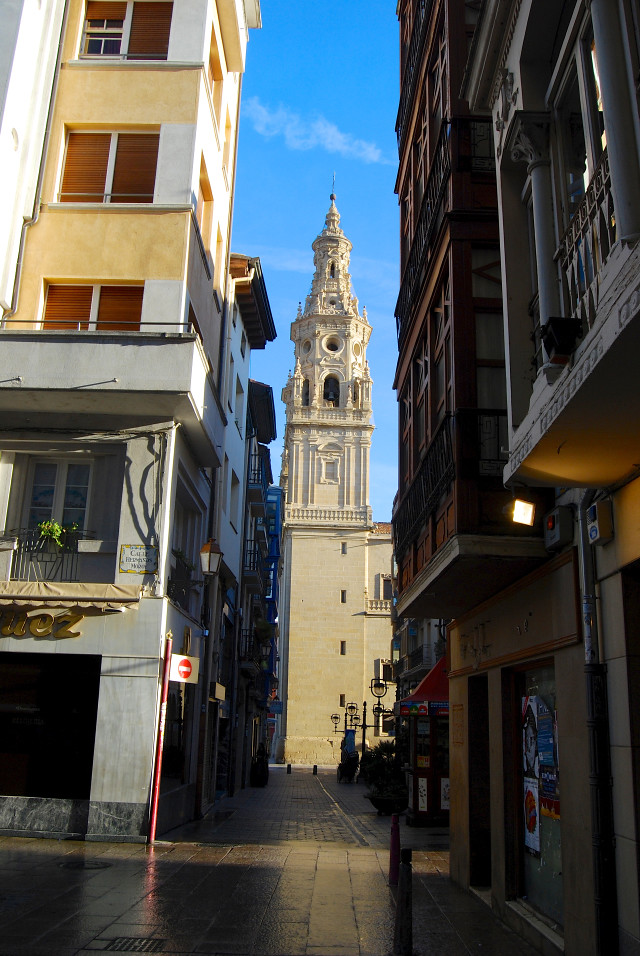 While we were in Logroño City, the La Rioja region’s capital we stayed in Hotel Marqués de Vallejo down a side street in the old town just off the main square which I would really recommend to anyone staying in the area. The whole city is very walkable, but it is especially close to Calle Laurel where all the best tapas bars are, and Calle Breton de Los Herreros where the best bars where you can sit outside with bathtub sized G&T’s into the early hours of the morning. More on all that in a following post, and a piece coming up I’ve written for Great British Chefs on Basque tapas culture. Also, as you can see from the first picture, the view from the hotel rooms is the perfect thing to wake up to your first day in Rioja. You can watch the city wake up. 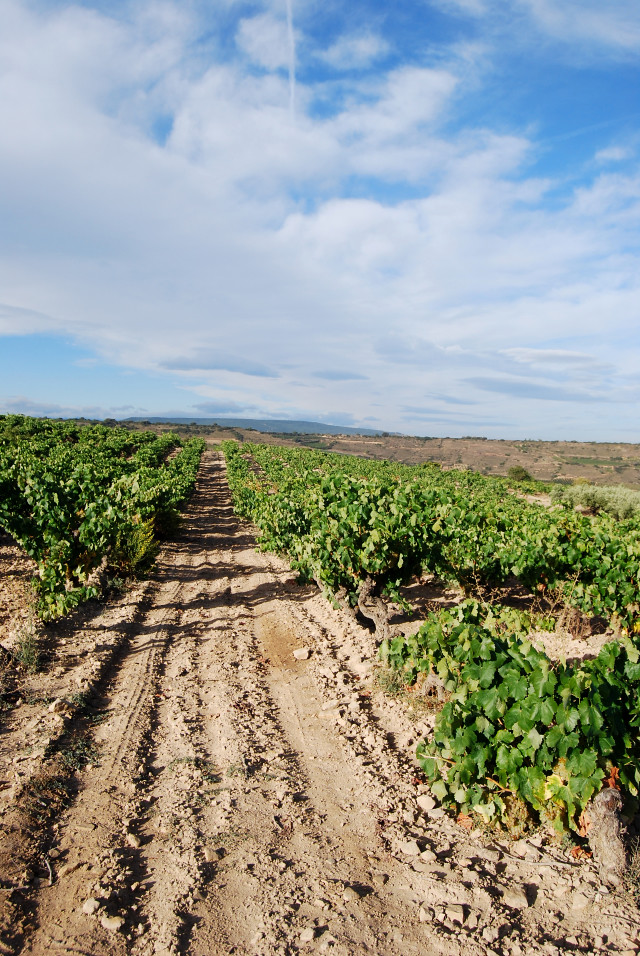 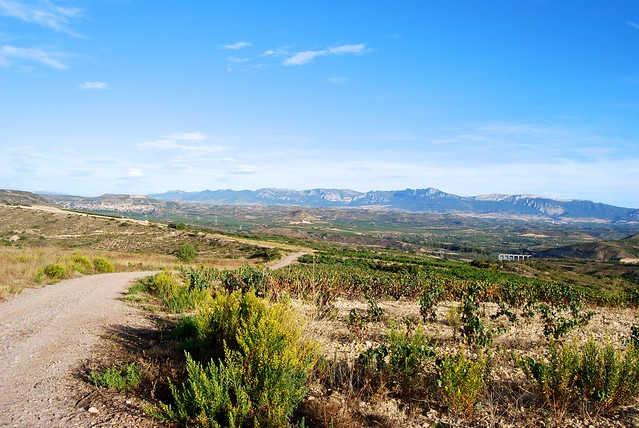 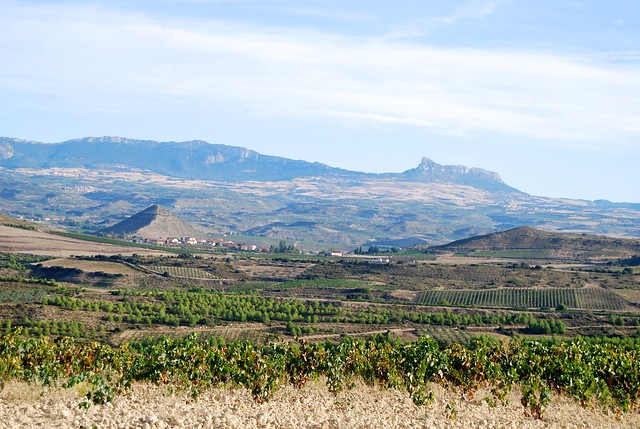 After the hotel’s delicious buffet breakfast (cooked food, yogurt, fruit, and my personal favourite of bread and chorizo) we headed out into the countryside just a stones throw away from the city to visit one of Campo Viejo’s many vineyards across the Rioja region. The views out over the vines and the mountains are just stunning, and really put the romanticism into the bottles of Spanish wine that we pick up in the supermarket, but don’t really think much else about. One thing that struck me about our day in the vineyard and winery was how much science, knowledge and passion goes into every single bottle of wine we consume, and I think we ought to try and have a bit more respect for and think more about the provenance of even the cheapest wines. 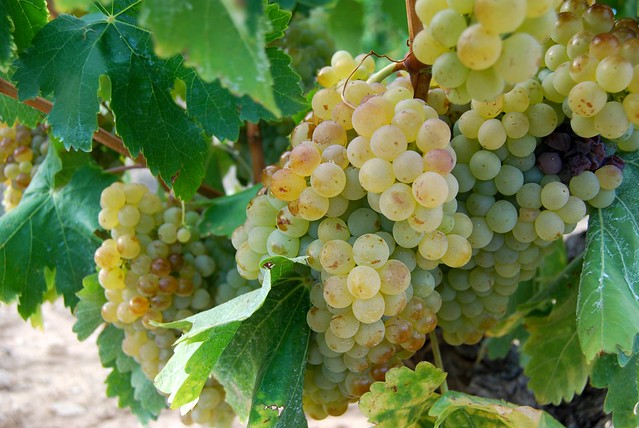 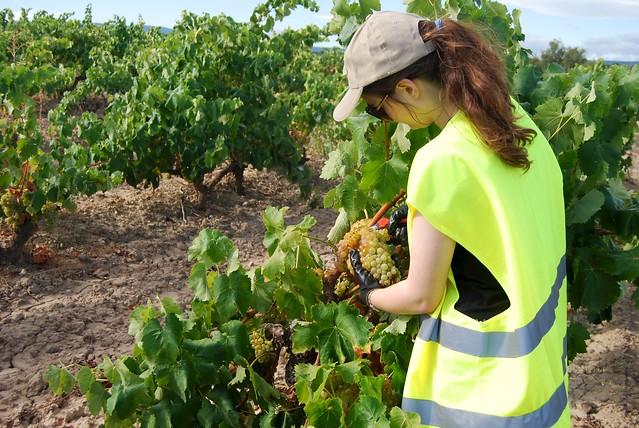 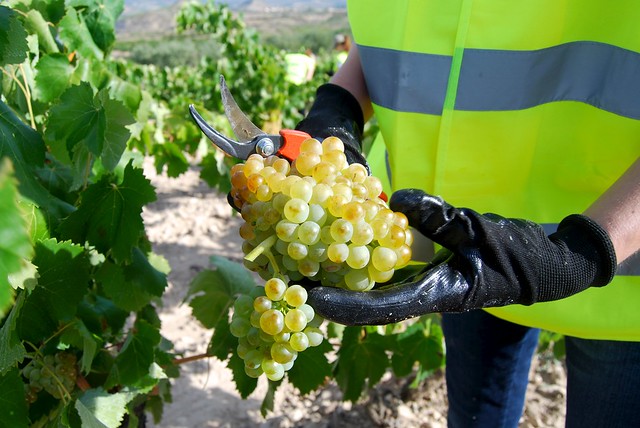 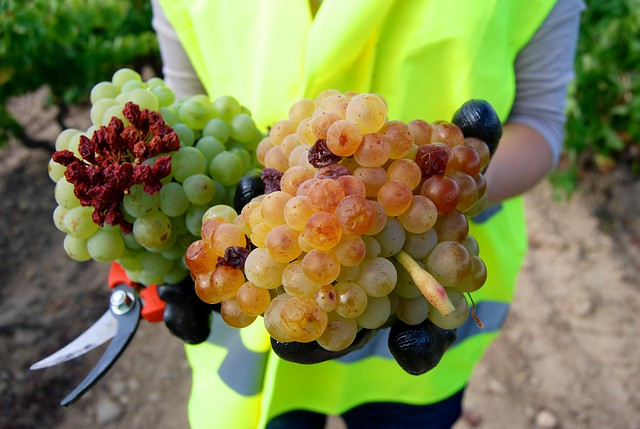 Donning out hi-vis vests (very stylish!), gloves and caps to keep the sun off of our faces, after a quick masterclass in how to go about it we set about harvesting the grapes we were later to be processing in Campo’s micro-winery. There are two things you need to think about when you’re picking the bunches. First, you need to check that none of them have got rotten on the plants (if they’re left too long it happens, but grapes that have started turning to raisins which you can see on the bunch above on the left are okay), and second that you’re harvesting grapes for the type of wine you want to be making. We tasted the grapes as we went along, but as a general rule large grapes create a light refreshing wine, and smaller ones are much more concentrated and sweeter. Where you find the grapes on the vine too also matters. The grapes on the left are still green, so add to that freshness of flavour. These were found protected from the sun under the canopy of the leaves. The ones on the right are ‘burnt’ by the sun where they were exposed, these create sweeter wines. 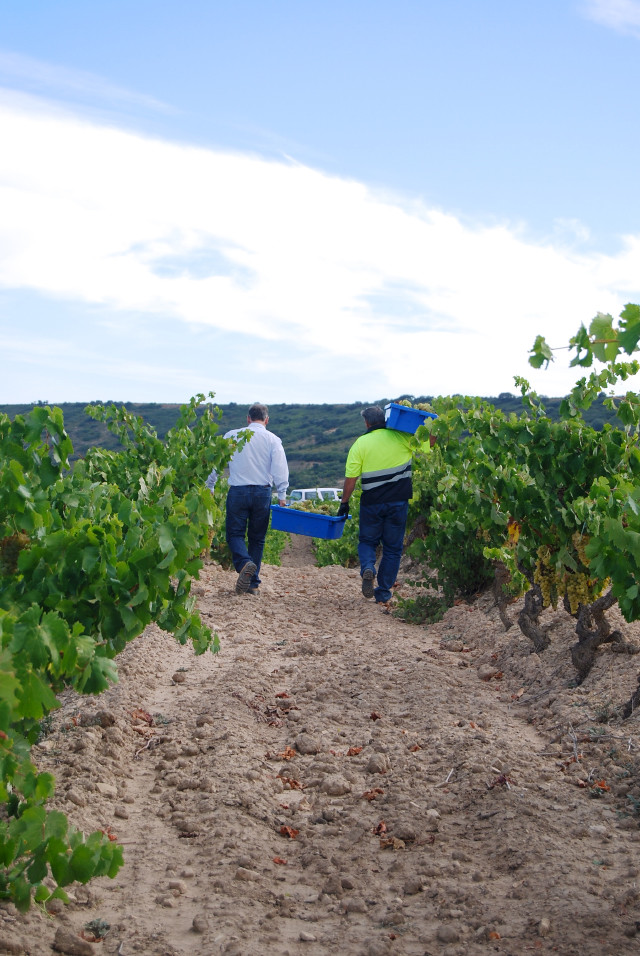 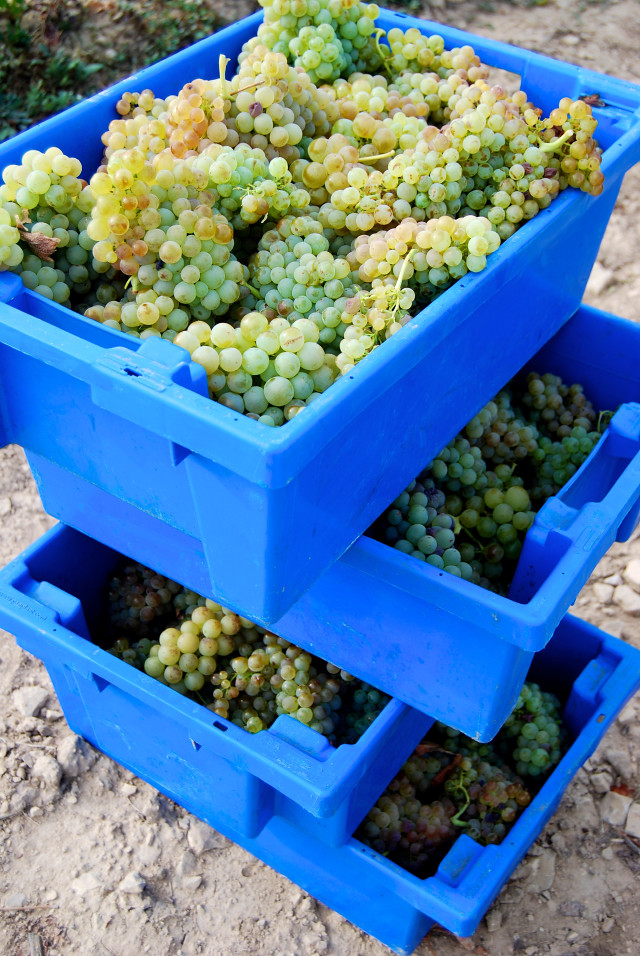 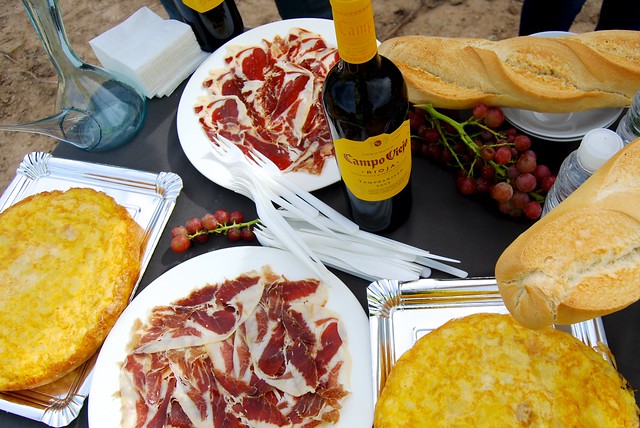 After about an hour of harvesting grapes (it is rather heavy and involved work with a lot of bending, I have a lot more respect for the seasonal workers who do the harvest this time every year now!) we set about our second breakfast in the vineyard of a couple of bottles of Campo Viejo’s Tempranillo 2012, plates of melt in the mouth Jamón and big fat wedges of the very best Tortilla I’ve ever had. The middle was soft and still very eggy which created a lovely rich flavour, and while it was probably one of the simplest things I ate on the whole trip, it was the one that really stuck with me as simply flawless food and cooking. 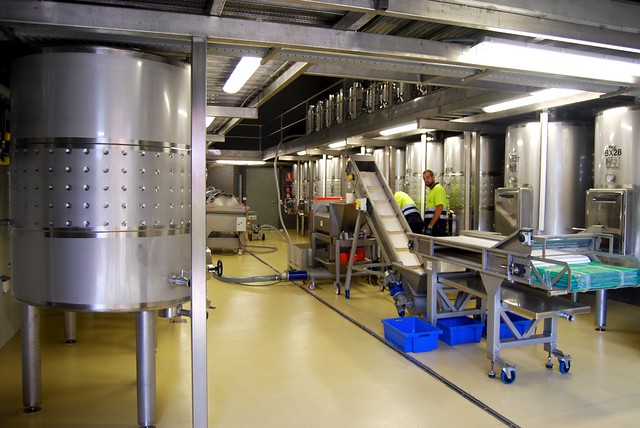 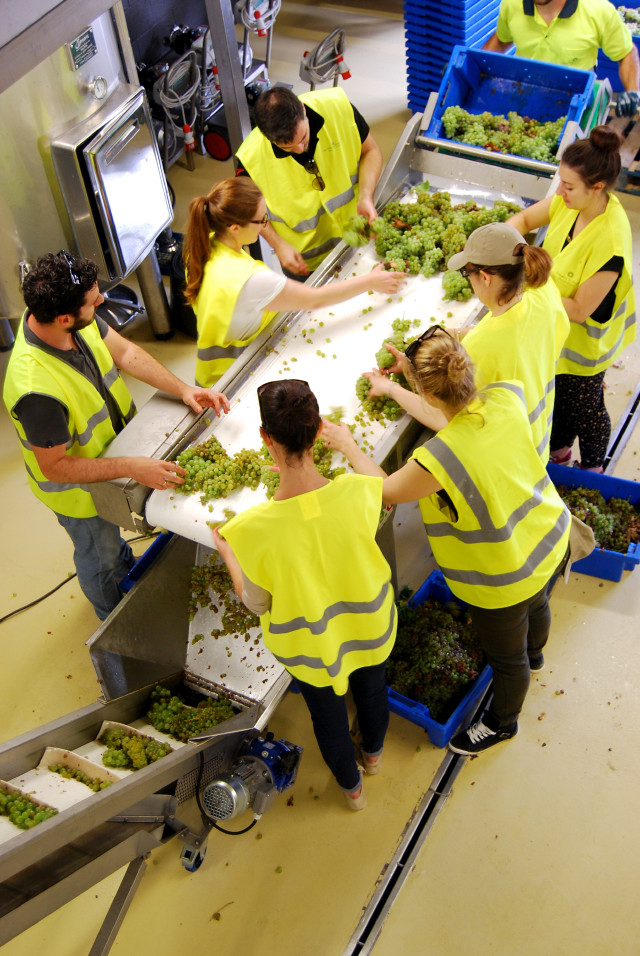 After all the romanticism of harvesting the grapes by hand (a method Campo still use for a fair few of their vines) we moved onto the science of wine making, into their pretty unique Micro-winery, allowing them to experiment on a much smaller scale with wines we might be seeing in a couple of years time. The grapes we were harvesting are for a pretty exciting new white with a fantastic story they hope to roll out soon and we were tasting at its different stages. More on that when I can! Anyway, having the whole process here in a much smaller scale makes it much easier to explain how grapes are processed in a winery. 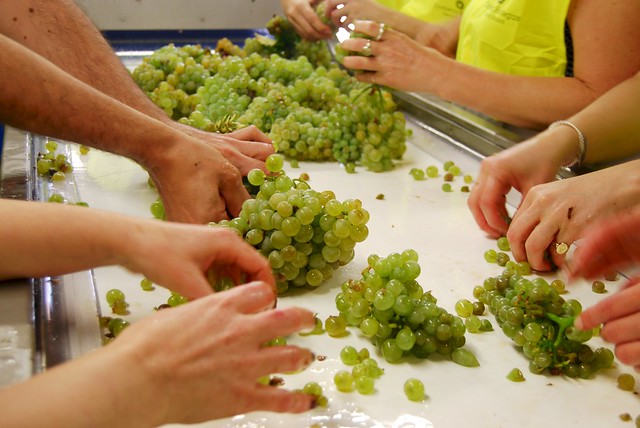 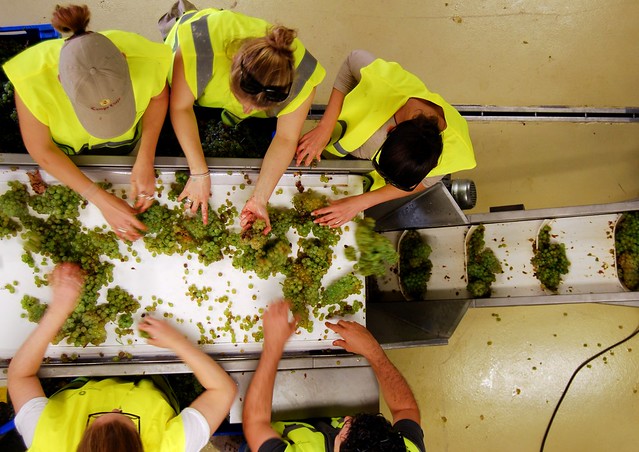 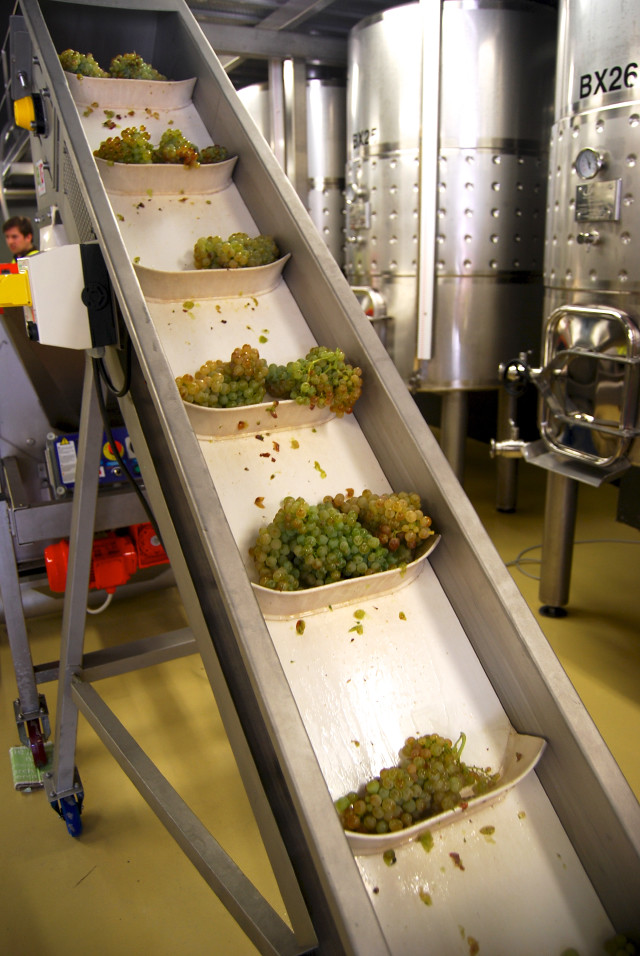 First, the harvested grapes need to be sorted by hand as they come along the conveyor belt; it is very wet and sticky work. The idea is to find any leaves and pull them out, but also chunks buried within the bunch that may have started to rot or get fungi which need to be ripped out by hand and dropped into large tubs at your feet. They then move up another conveyor belt for the grapes to be removed from their stalks, and for the skins to be steamed off. This does not happen all the time though; some wines are made with the skins on and the stalks to create different balances of flavours, or something unique to add a little something to a blend. 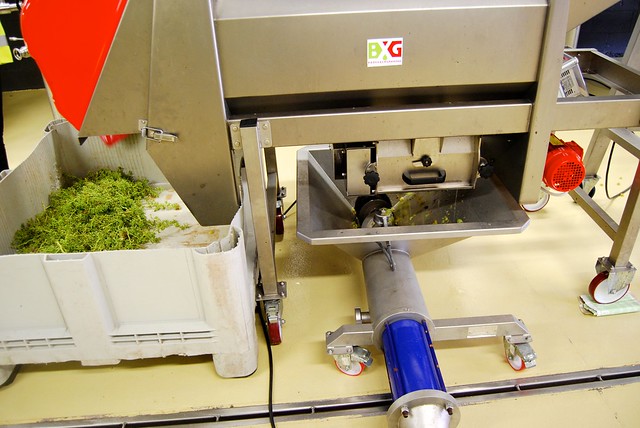 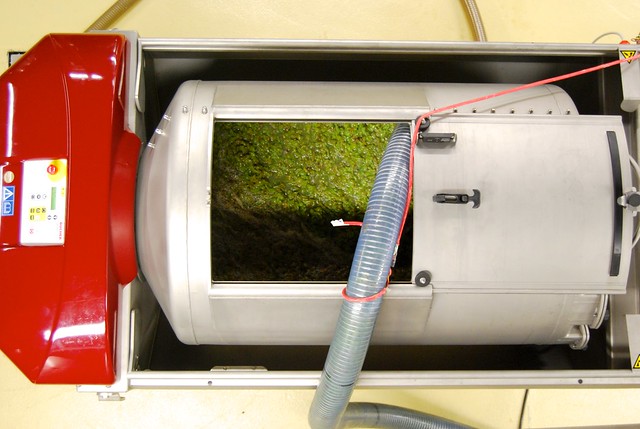 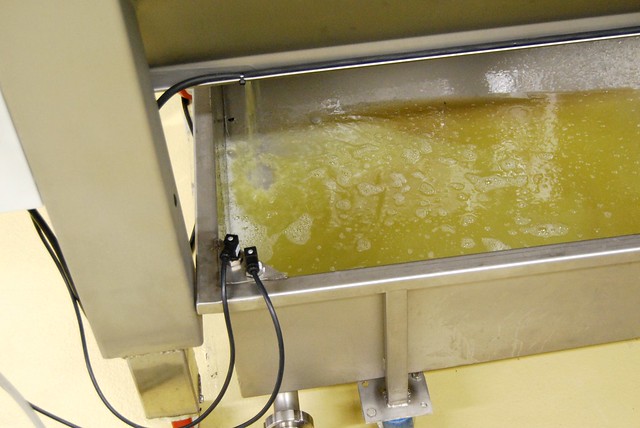 This is then piled into a machine which essentially filters out the solids, allowing the grape juice to drip down into the collecting tray below. This juice is strong, fresh, sweet, concentrated and its flavour gives you just a whisper of what is to come in the finished and fermented wine. It is then pumped upwards into the fermenting cylinders above and around the room. Think industrial demijohn’s if you make wine at home, at all. These wines once they finish fermenting are the raw materials and flavours for later blends and wines, and are cloudy as they have yet to settle. Once blended, they are aged in oak barrels and in their bottles. You’ll see more of that in my next post, where we go on a tour of the winery proper. 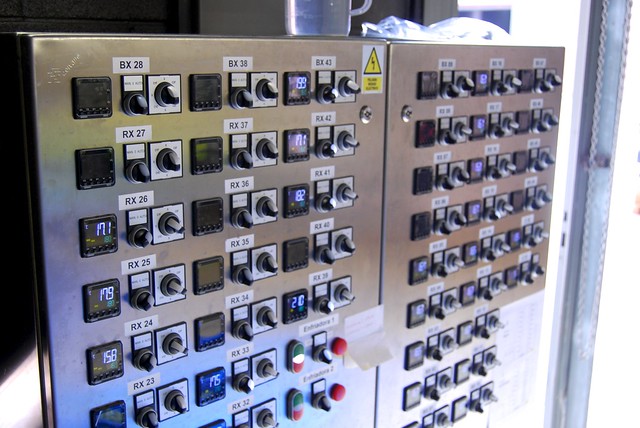 This is the control bar where the temperature is controlled for all the wines in progress. Not only is the temperature important in producing flavours (they test the same wine with the same process at several different ones), but the type of yeast used is also as important, as well as the type of grapes used, if they are burnt, big or small, and if the skins are left on or not. Think about how many variables have been considered next time you open your bottle of Rioja.

Keep an eye out for the second part of this post, probably coming on Monday where after a delicious lunch out on the Campo winery’s stunning terrace I’ll take you a tour of the Campo winery where all of the bottles of their wines you buy are made, blended, stored and aged before being shipped out around the world. I promise you, their room where you can see nothing but barrels is quite something to see! 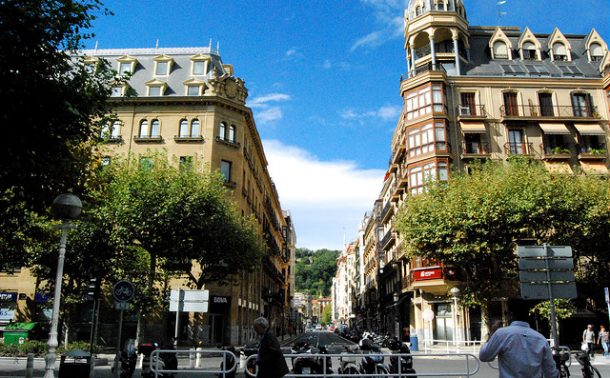 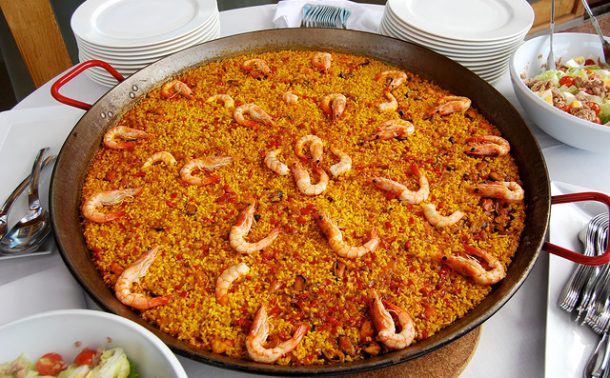 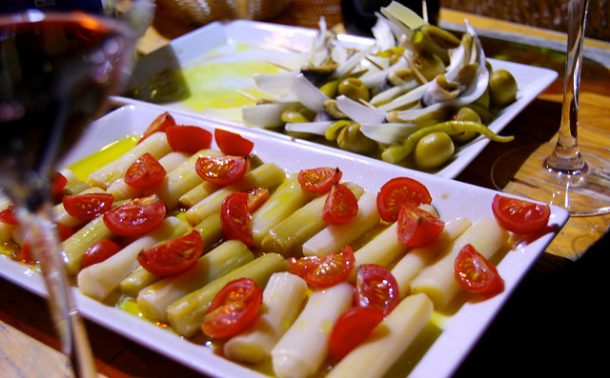