As I mentioned in my review of The Burger Brothers’ residence at Alberry’s the other week, a massive source of new opening excitement in Canterbury was whipped up the moment Byron announced that they were coming to town. Now, usually I’m not one to write about chains, but I’ve never seen Byron as one. Maybe it was because the first Byron I ever had when there was only a handful of branches; I was eating what I will always remember as one of the first, good ‘proper’ hamburgers I ever had at their first ever branch outside of London at Bluewater (where my teenage self used to travel to to go to all the big shops before I moved to London!) 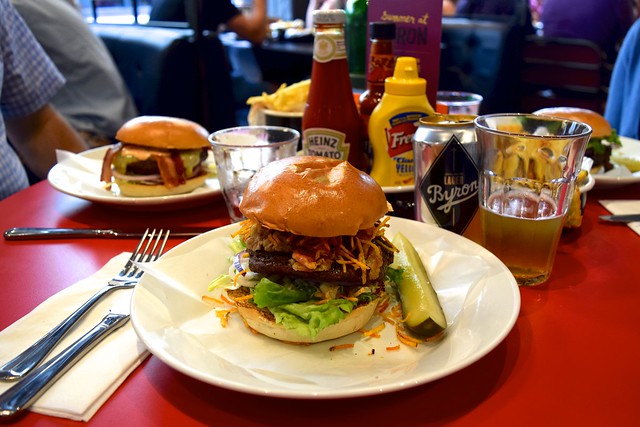 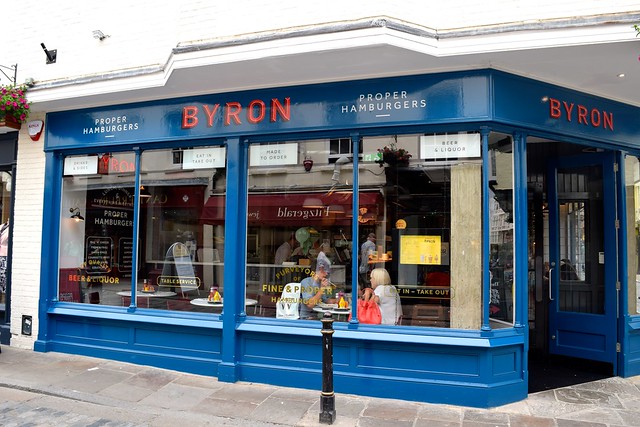 I also thought that the launch of Byron in Canterbury, now I had a branch local to me would be a great first time to try out the Byron Burger Club, a mailing list service that is free to sign up to, and delivers little treats into your inbox every Tuesday morning to use in your local Byron restaurant on the Thursday. As we visited the Thursday Byron launched, we all signed up to the Burger Club and printed out launch vouchers for free burgers. All you really need is the barcode (though I think printing is easier), and our server easily processed these at the end of the meal. On the same day general burger club members were offered free extra toppings on their burgers, and other offers in following weeks have included a free beer and a free shot of bourbon with your meal. I’m really happy I’m now a burger club member and I’m sure I’ll be back for the Thursday perks. 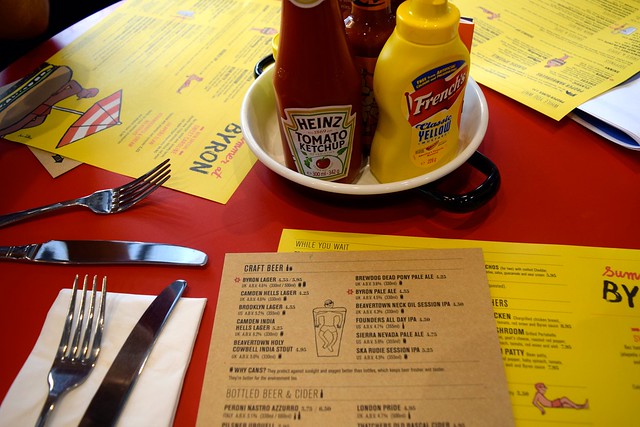 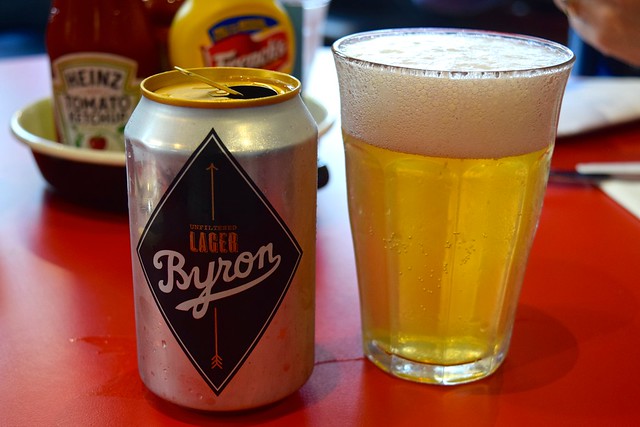 Burgers and beer are already a fantastic combination, and as it was a hot day I opted to try a small can of their house lager, brewed for them by Camden Town Brewery (they also have a couple more Camden Town options on their menu, as well as a house ale). Their lager is a good, light, solid brew which really did go perfectly with my lunchtime burger. It is nice to get something different in town; as much as I adore Whitstable Bay, so many places locally are owned by Shepherd Neame it gets a bit predictable. 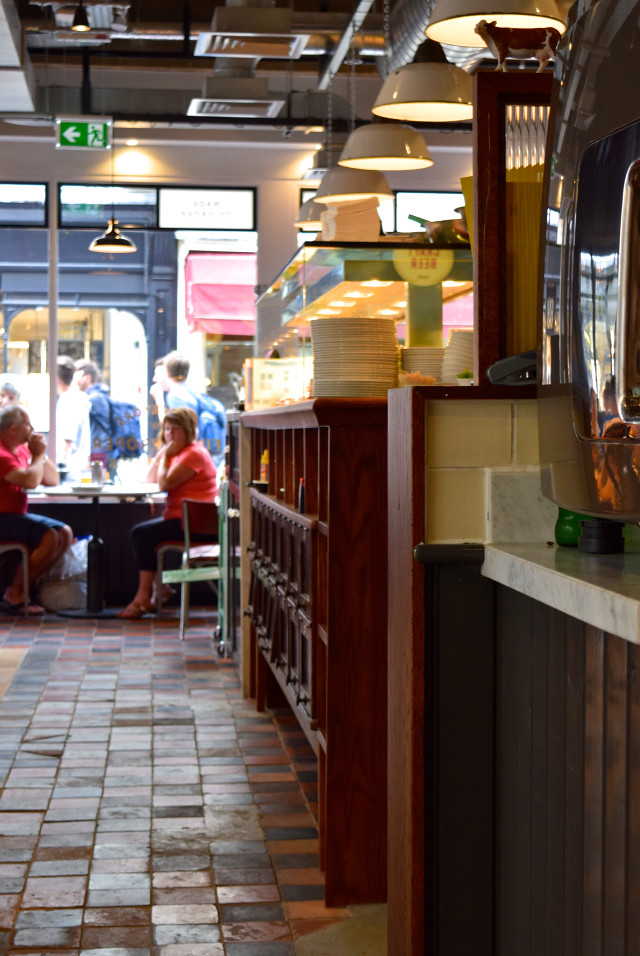 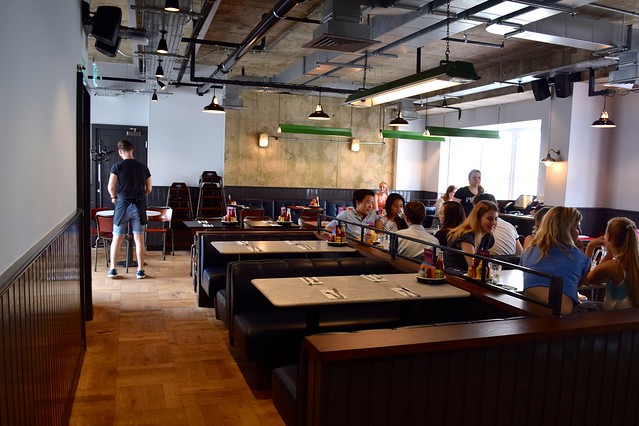 While it looks a bit small from the outside, the restaurant is actually massive. We ate downstairs in the middle of the action as it was a bit crammed as it was the opening, but their upstairs is so spacious, I’d ask for a table up there if at all possible so you can enjoy your burger and courgette fries in a bit more peace. 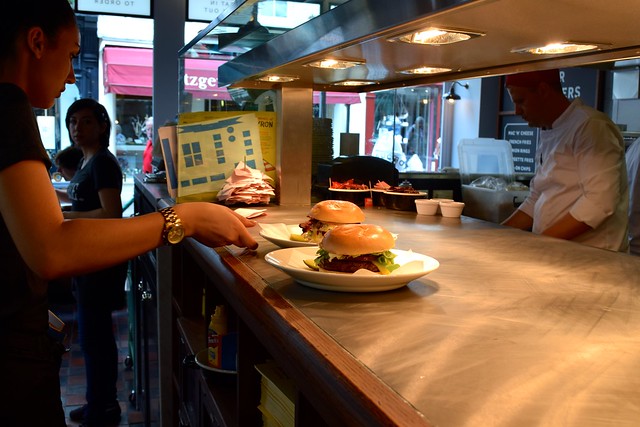 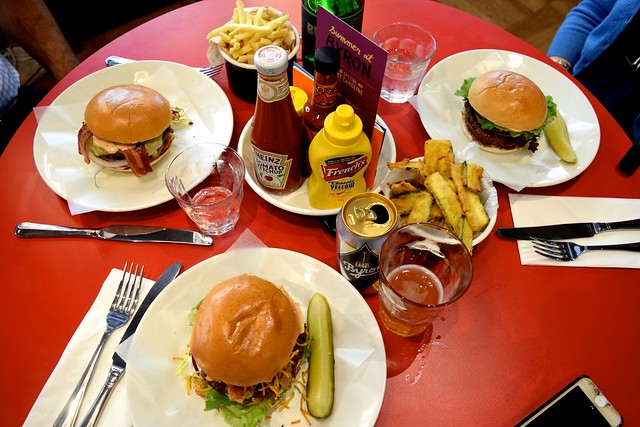 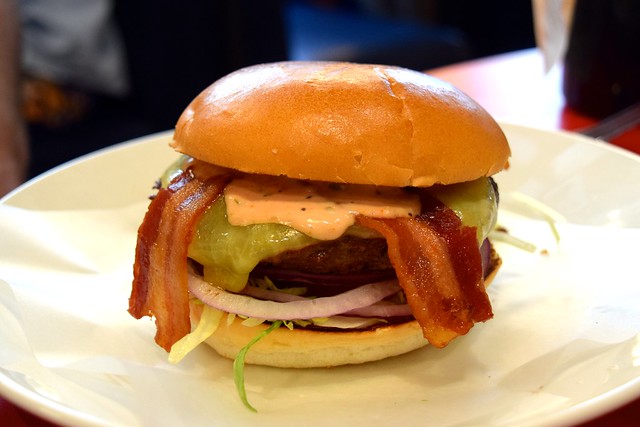 All opting for different burgers, my Father (who seems to have developed a habit of gatecrashing review trips whenever the words ‘burger’ and ‘Canterbury’ are mentioned in the same sentence) had the classic ‘Byron’ burger, a classic patty loaded with dry cure bacon, smoked cheddar, shredded iceberg, tomato, red onion and Byron sauce. Now, as you’ve probably all learnt by now trying to get him to elaborate on how something tasted is like trying to get blood out of a stone, and as the burger is cheesy I was hardly about to try a bite. Though, what I can tell you is it vanished very quickly and he said he’d be happy to have lunch there again. 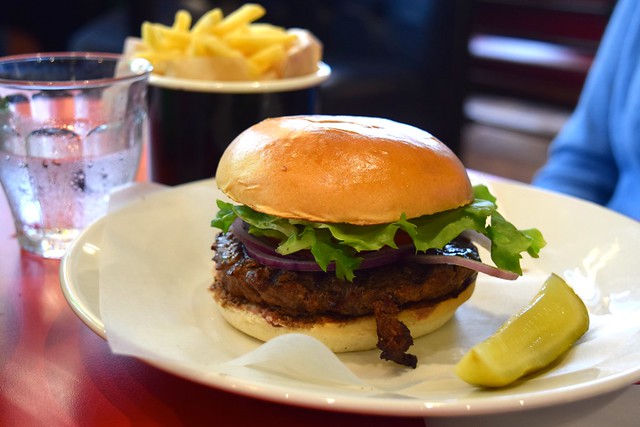 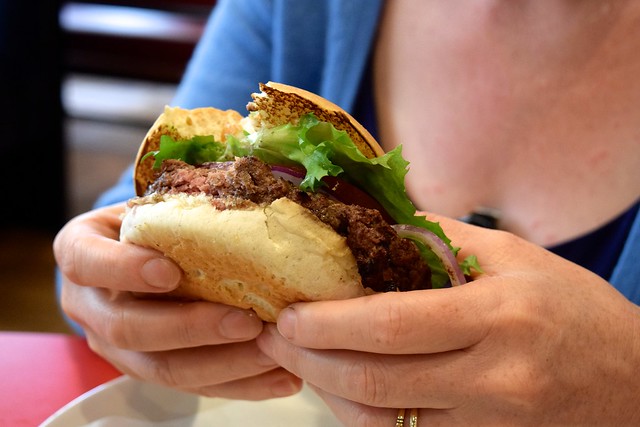 As a burger purist, Mummy had the classic hamburger, simply a burger patty with tomato, lettuce, red onion and mayonnaise on one of Byron’s perfectly structured and toasted brioche buns (they taste great, and don’t fall apart at all!) She’s also big on her ingredients, and she was really impressed with the patty, meaty and full of flavour, she said you could tell that it was made from good quality Scottish beef. 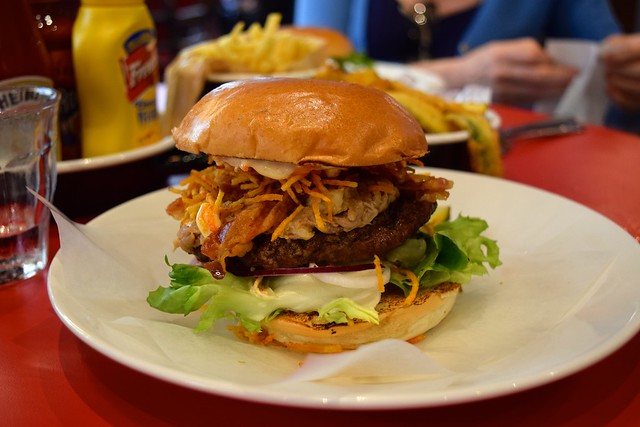 Heading off of the main menu, I was excited to try the ‘Sweet Caroline’, a Summer Special burger which (drum roll please) does not contain any cheese. One of Byron’s patties is put between one of their toasted brioche buns with pulled pork (which was pretty awesome, by the way. Full of flavour and not too heavy with sauce or vinegar as some versions can be), streaky bacon, jalapeño slaw (which was spicy without being too overpowering), crispy potatoes, lettuce, red onion, and apple vinegar mayonnaise. This was honestly one of the best balanced burgers I’ve had in a while (difficult the more ingredients you pile in), and contrary to predictions when it arrived I was able to both fit the whole burger in my mouth, and it did not fall apart. 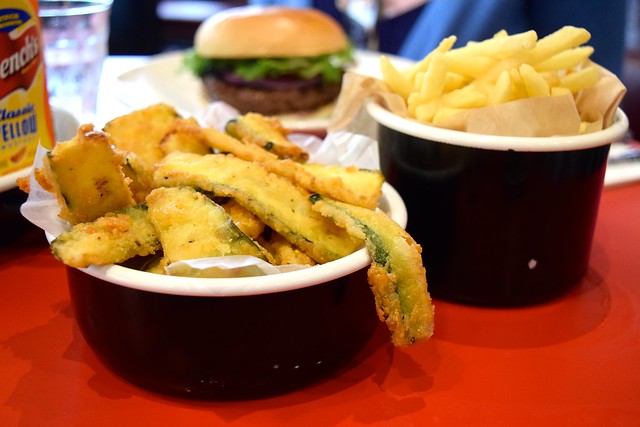 While their perfectly both crisp and juicy courgette fries are always a must order when it comes to sides at Byron, we also ordered a serving of regular fries for good measure. Crispy on the outside, and fluffy on the inside they’re perfectly serviceable. They’re good fries, but can someone please explain to me why you’d want them when the courgette version are also on offer? Madness. Utter madness. 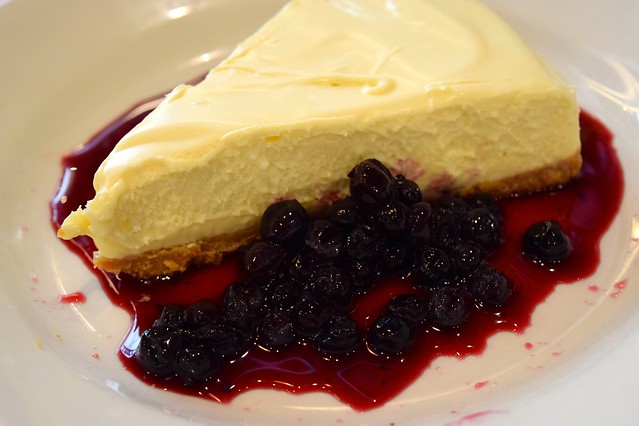 We ordered two desserts to share. We were blown over by the White Chocolate Cheesecake with Honey Poached Blueberries (it tasted identical to the one my Mother makes and that is praise indeed!), and the Caramel & Honeycomb Sundae (sorry the photos did not come out well enough to include) was super indulgent with a good sauce to ice cream ratio, chocked with bashed up bits of Crunchy bar. While we enjoyed them both, I’ll be ordering the cheesecake again, every time. 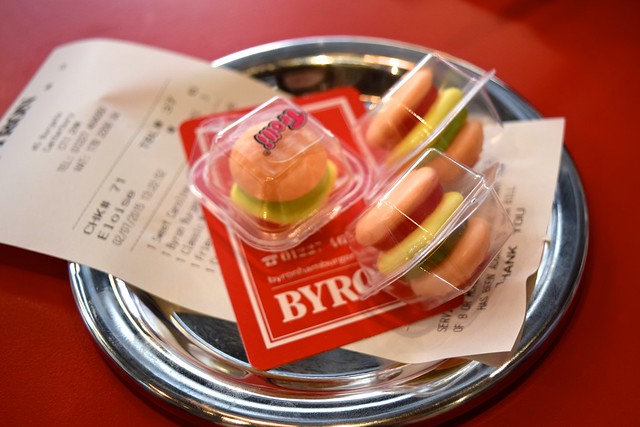 As a lovely final little touch to our meal, our meal came with a mini candy burger each, both adorable and delicious; I used to love these as a kid. While I’m not usually big on chains, we really enjoyed our meal, it was as good as anything I’ve had at any independent burger restaurant and I for one welcome Byron’s arrival in Canterbury. I’ll keep you all posted on other new openings in the city this Summer and in the Autumn. 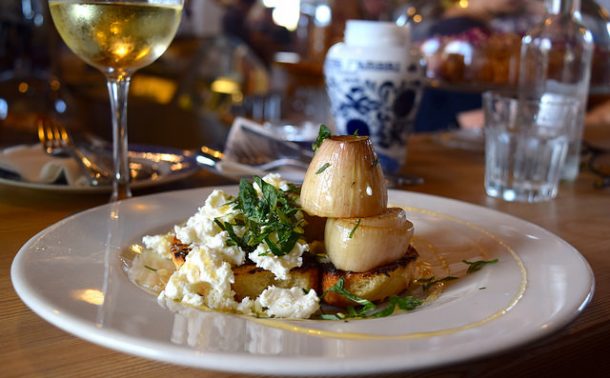 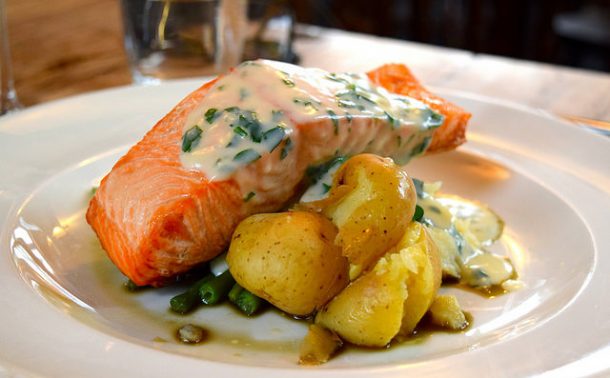 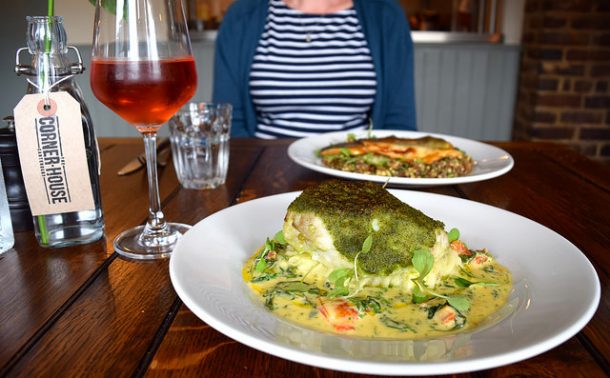