After you all took so much interest in the posts I wrote in 2013 and 2014 about how I make money blogging, I thought it was about time again that I sat down to have a look at where exactly my income is coming from, especially now once some of the dust has settled from some of the bigger changes that have come to how bloggers bring in revenue this year. For example, Pinterest’s changes which made it harder to monetize the platform with affiliate and pay per click links from platforms such as rewardStyle and Shopstyle. While we’re on the subject of Pinterest, shall we start there, because the platform (which is where I have the most followers/ subscribers, clocking in at somewhere around the 715k mark) has become a surprise area of earnings growth for me. Where as last year the money I made off of the platform sat comfortably around the two figure mark, this year I’m looking that it will comfortably be sitting around the four figure mark, which is absolutely massive growth.

As I mentioned, in February Pinterest updated so that all affiliate links posted to the platform would be removed, which hit many bloggers like me who gained a large chunk of their income from pinning affiliate linked products to the site particularly hard. At the end of 2014, roughly 10% of my income came from Pinterest affiliates. While I found this partially frustrating at the time, I’ve drawn my focus into three main ways I have been able to grow my revenue from Pinterest so far this year.

First, I became a member of Hello Society, a Los Angeles based platform that both provides members sponsored and lifestyle pins to add to Pinterest from a Pinterest style ‘pinwall’ on your influencer dashboard that either are pay per click or pay per repin, and taps members of their influencer network to create custom content for Pinterest for a brand campaign, which then appears on other influencer pinwalls. You’d be surprised from an insider perspective, where I am seeing all of the campaigns, how much of your Pinterest feed is served by Hello Society. I’ve had great results so far from using the network, I’m in three figures since February, keeping in mind I was barely putting any time into it over April and May when I worked on the general election and I was knocking on doors every hour of every day, 6 days a week.

Next, I’ve focused more on creating sponsored content, similar to how I create sponsored posts on my blog, but not necessarily with original content. I’ve done a couple of independent sponsored product pin projects working directly with the brands themselves, and I’ve been experimenting with doing a few sponsored boards, such as my ‘Date Night‘ board I created for match.com, and my ‘Autumn Style File‘ board I put together in collaboration with Farfetch.

Finally, not all networks affiliate links no longer work with Pinterest. I’ve given up on rewardStyle in that respect, but I had my suspicion confirmed the last time I had a catch up with the Shopstyle team that you ca still pin affiliate links for their platform to Pinterest, so I’ve been throwing a few up from there with good results.

Thinking more about affiliates, I’m holding steady against what I earned from them last year, though while I do still make a bit of money when I drop the occasional cooking gadget into a recipe post, or when I link out to somewhere via one of my Weekly Love posts from Shopstyle, pretty much the only money I make from rewardStyle these days is from my own purchases. However, this is not surprising as the platform is geared much more towards fashion bloggers, which I am not. I still see a steady trickle in from using Skimlinks on my site, but not as much as in previous years. I still think there is a place for affiliates as part of my blog strategy, but they are no longer something I think it is worth dedicating as much time to as say growing my Pinterest or working on ideas for sponsored blog posts.

Moving onto sponsored posts, things are actually looking up. I wrote in last years post that because of Google’s changes to their terms of service (penalising brands who purchased ‘follow’ links in blog posts, which was one of the main reasons brands commissioned sponsored posts in the first place), bloggers were obviously going to see a big fall in their revenue from sponsored posts. However, I think brands are starting to see more of the benefit of sponsoring posts to build brand awareness, rather than search engine rankings and I’m actually on track to make more this year from sponsored posts (though I have put my fee per post up again from last year) than I did last year, though still only about 50% of the amount I made in 2013 before the changes.

On the subject of sidebar advertising, 2015 is actually my best year yet. Because of changes to ad units that came in in January I’ve actually made less from my top ad unit you can sometimes see on the right hand side that is served via Mode Media, but brands seem to be interested in straight out purchase of sidebar ad units once again, which can only be a good thing.

Finally, as ever the largest chunk of my revenue (almost 80% at the moment) comes from my work as a freelance journalist and recipe developer. As many of you know, I’m a regular every month on the Borough Market blog (and I’ve popped up in their newspaper), and I also occasionally can be found at Buzzfeed, Great British Chefs and The Debrief. I think it is true of most bloggers who blog full time that actually most of their money comes from freelance gigs away from our websites, and we all recognise how instrumental our blogs were in landing those jobs in the first place; they feed each other.

Another thing that should be noted, is that while I did not realise it at the time, with the exception of the two months after the election, when I went to work on the general election around about April, I ceased to be a full time blogger. Now I’m working three days a week in politics, then blogging the other two and at the weekends, I know that I will probably start to see a dip in my revenue, most likely in 2016 when I don’t have roughly half the years revenue when I was focused on my blog 100% propping up the numbers. However, for many different reasons I’ve decided that I’m okay with that, and it will be even better if I see enough growth that my revenue numbers simply hold their position from this year into the next. So far over the past month or so, something I’ve realised that is good about having less time to blog is that I’m becoming more selective about the opportunities I accept as money is less of an important factor (though it still is important!) so I think I’m enjoying my work a lot more.

I hope you all found this an interesting insight into how I make money out of my site and social streams, and if any of you have any questions or are curious to hear about anything I’ve mentioned in a bit more detail, feel free to leave a comment at the end of this post, or get in touch on Twitter. I also hope that this post has been helpful to those of you who aim to make even a little bit of money off of your blogs but have not taken the plunge just yet! 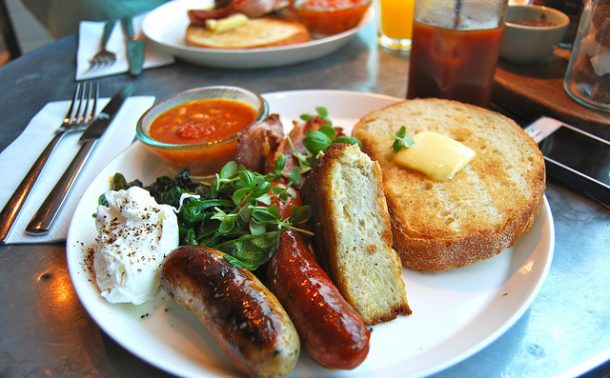 Blogging The Ethics Of Restaurant Blogging Blogging Blogger Talk: Why You Should Never Take Your Blog For Granted