For my first restaurant review of 2018 I want to share an incredible meal I had just before I headed back to Kent for Christmas: a table full of mouthwatering mezze (paired with some pretty awesome cocktails) at Yosma in Marylebone. Inspired by the food of Istanbul, Turkish small plates are the order of the day here. I’d plan to take a big group of you: the two of us were utterly stuffed (and I took some of the leftovers home with me) and I wish we could have had room to sample even more dishes: the king prawns with dill, fennel and za’atar smelled divine from the next table, and we did not order any mangal/ clay oven dishes! We went on a weeknight and it was rather busy, but there were still some tables for walk ins. If you’re going on a Friday night/ weekend, I’d advise you book so you don’t miss out! While we were trying to narrow down our mezze choices we started off with a couple of cocktails: Sherin had this beautiful, big red Yosma G&T flavoured with homemade strawberry tonic. God it was good. I had the Woodland Spritz, which was complex and curious, while still being great with our food: pine distillate, elderflower, lemon and prosecco. We started off with the marinated seabass from the cold mezze section. I have no idea what it was marinated in, but it was served with wild kale, sea purslane and aleppo chilli, and next time I dine at Yosma I’m ordering an entire plate of this for myself. Or doing that thing where I order two of something raw, and still keep the plates all to myself like I do with the raw langoustines at Bao in Fitzrovia. The fish was fresh, bright and slightly tangy, with a very mild fizz to it. A real burst of flavour to start off the meal. Now, I’m not a big lamb eater but the Turkish dumplings, served with yogurt, chilli oil, mint and just a dusting of sumac were on point. The lamb neck was stupidly tender, the wrappers toothsome and the flavourings stupidly more-ish. We ordered the big plate as they were our main meat dish, and while they do offer these as a smaller portion, the bigger the better. I’ve got a recipe bookmarked, but I’ll never get them this good. You can’t really do mezze without doing hummus, so we ordered a big plate of it which came with complimentary (and beautifully seasoned) flatbreads. It was wonderfully flavoured (and this is coming from someone who usually notes tahini as a mark of evil) and my only qualm was there were not enough of the beautifully tender, melt in your mouth whole chickpeas sprinkled on top. For our sides we had the fried potatoes with garlic and mint were fantastically crunchy, but they were just potatoes so if I were you I’d go for a different side. The tomato salad with walnuts, pomegranate, parsley and mint sounds excellent, or go for our other side of a freekeh salad, studded with pomegranate, mulberries, dill, and spring onions, which was tart, flavourful and complimented everything we had beautifully. Really, we did not have room for dessert but because I’d ordered another cocktail (the Ananas, a blend of pineapple rum, ginger ale, peach puree and fresh ginger) that was both refreshing and again perfect to be paired with a plate of food we had the chocolate tart served with a pistachio crumble, fresh raspberries and an absolutely stunning pistachio ice cream. The tart was great, but the rich, creamy and indulgent pistachio was the real star: order it by itself if you’re after a sweet, but slightly lighter way to end your meal.

I urge you to go and try Yosma the next time you need to choose somewhere to eat out with friends. However, if you can’t take a reservation, a few more small plate restaurants I love in London that take bookings: Andina (Shoreditch), Duck & Waffle (Liverpool Street), Breddos Tacos (Clerkenwell + Soho), Señor Ceviche (Soho), The Palomar (Soho), Ducksoup (Soho), Lima (Fitzrovia), Bala Baya (Southwark), Lupin’s (Borough). 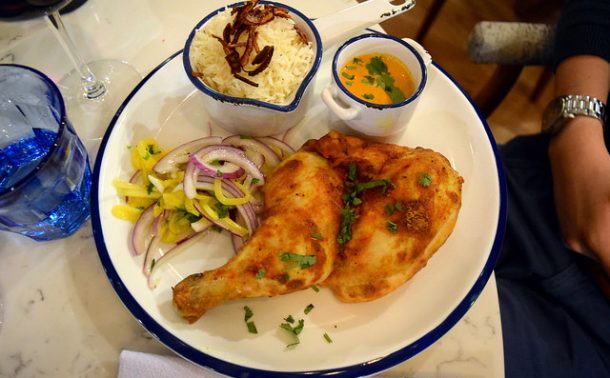 Eating Out Places To Eat In London: The Pickled Hen, Marylebone 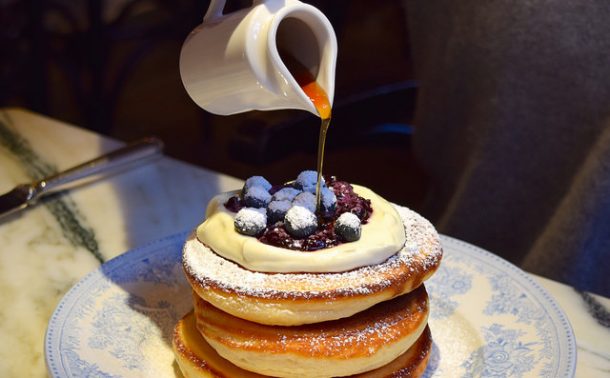 Eating Out Places To Eat In London: The Chiltern Firehouse, Marylebone 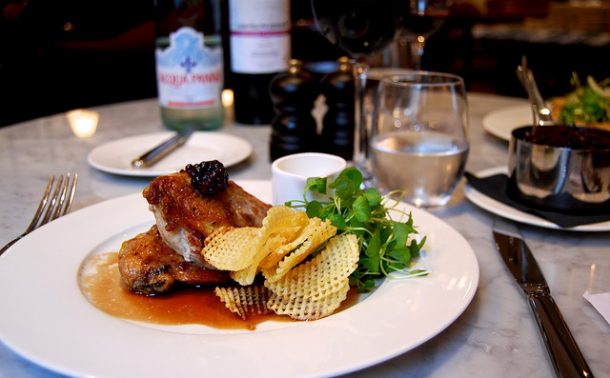 Eating Out Places To Eat In London: 108 Brasserie, Marylebone