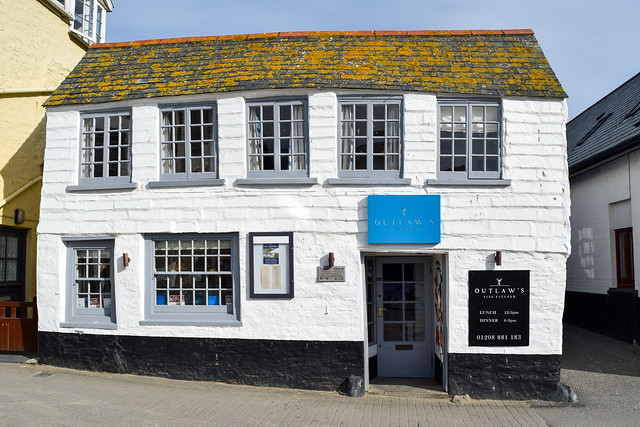 Our family trip to Cornwall in May coincided with my Mum’s birthday, so after lunching in the sunshine behind Rick Stein’s Fish and Chip Shop, we headed up the coast for something a bit special in Port Isaac (otherwise known as Port Wenn, the picturesque little fishing village which is the fictional home of Doc Martin). Port Isaac is the home of Restaurant Nathan Outlaw, usually recognised as the best restaurant in the country. It has what I don’t doubt is a stunning, many course set menu each night, but if you’re looking for something a bit more casual and relaxed, down in the harbour Restaurant Nathan Outlaw has a much smaller, and I think much cooler little brother: Outlaw’s Fish Kitchen, where they serve up little fish dishes and lobsters from the waters outside. 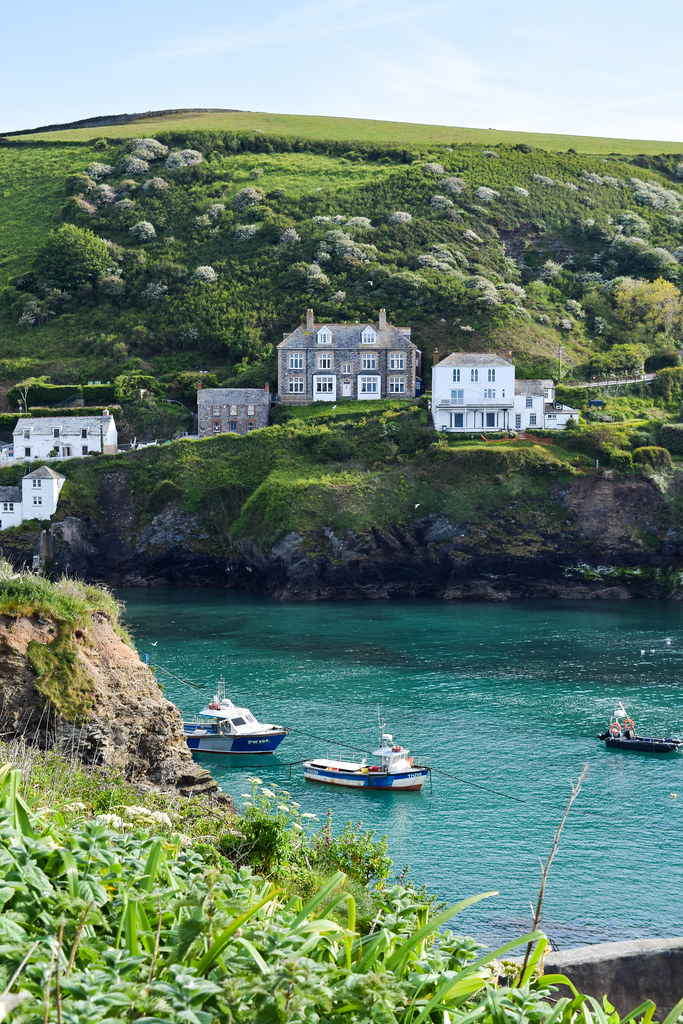 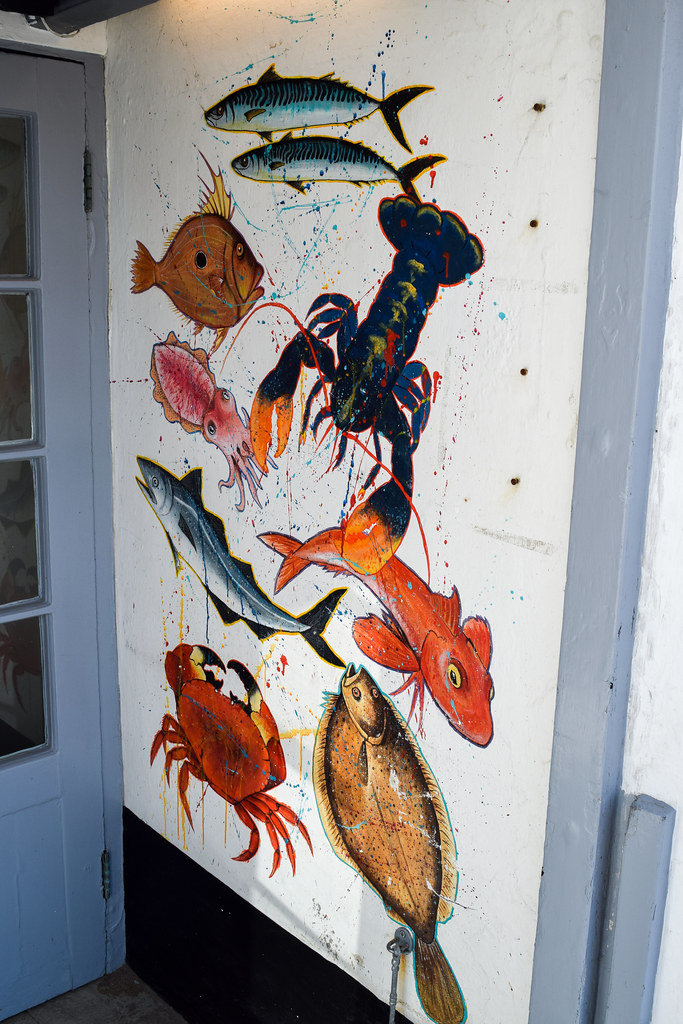 You can’t really park down by the restaurant, or even drive down there for drop offs unless you have a very small car (we drive a Range Rover!) so park in one of the public car parks up by the other restaurant and take the coastal path down into the harbour, which really does have some beautiful views – and parking is free in the evenings. Don’t worry about dressing up, this is a smart denim-friendly establishment! (And while there is way more to Port Isaac than the TV show – which they were filming the new season of while we were there – yes, that is the Doctor’s surgery you can see up on the hill!) If you’re early you can’t really get a drink at the restaurant as it is in a simply tiny listed cottage (smallest restaurant toilets I’ve ever seen!) but the pub opposite is really nice, traditional and friendly, and the local Cornish Rock Gin makes an excellent G&T before dinner! 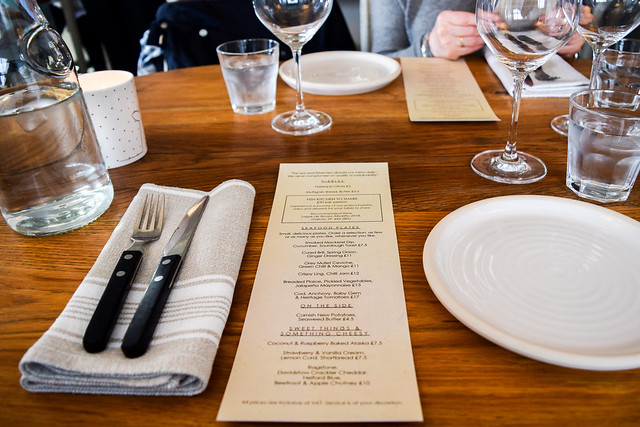 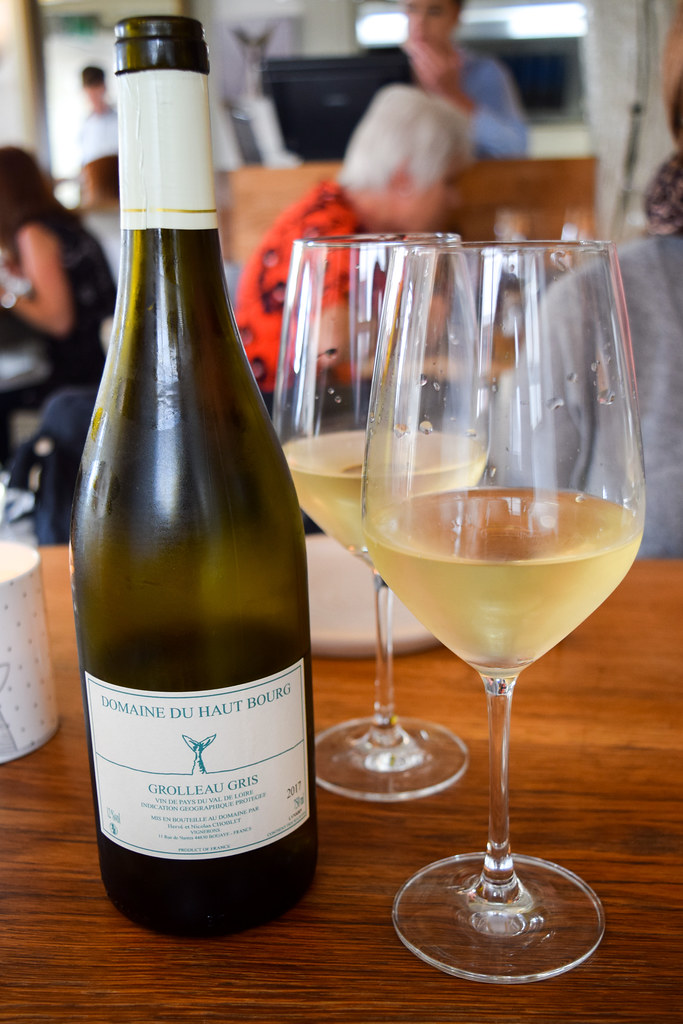 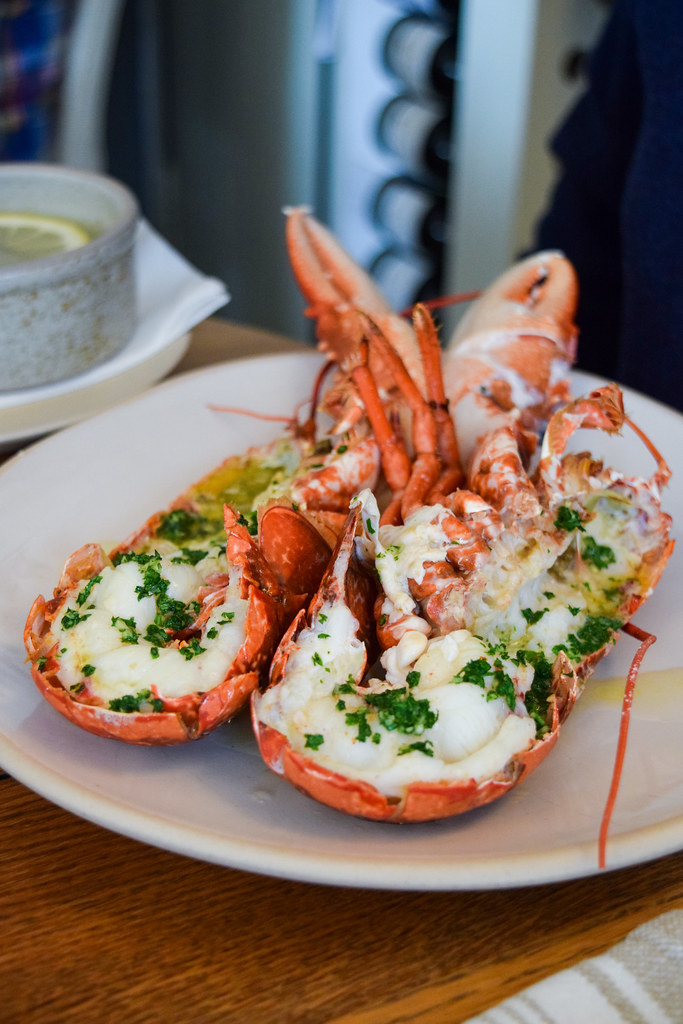 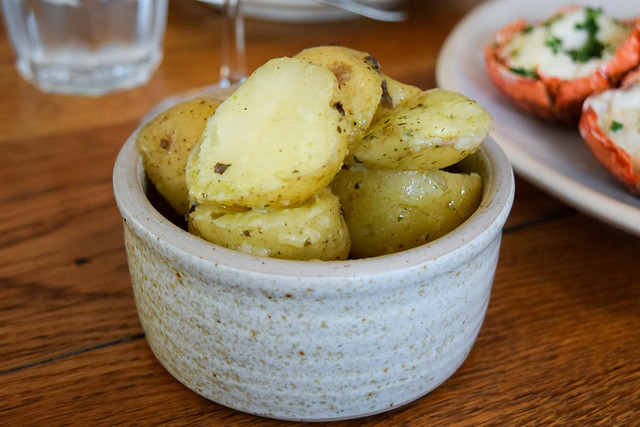 A few decisions needed to be made once we had sat down. First, the wine. Our host at the hotel, Paul told us that the house wine was excellent, so instead of bothering to go over the list we went for that, which really was excellent. Then, onto our menu choices. Seafood lovers that we are, it was obvious that my Mum and I were going to go for the multi-course / dish tasting menu. What I loved about Fish Kitchen is that while usually at restaurants  to get the tasting menu everyone has to have it, here any number from the table can enjoy it as long as there are at least two of you having it. This worked out great for us, because, as not much of a fish fan my Dad was worried what he was going to eat, but came along because it was my Mum’s birthday treat.

However, it seemed that the kitchen gods were smiling on us that day, because on the specials board, right behind his head were some Port Isaac lobster, served grilled with a homemade herb butter, to which he added a side of seaweed potatoes on the side. Now, the lobster was expensive, £40+ I think, but there were honestly no regrets. Finally he relented and let me try some (though I have some very funny videos on my phone of how intensely he was focusing on eating it!) and I can confirm it was the sweetest, juiciest lobster I’d ever tasted, perfectly cooked and doused in a simply mouthwatering butter, I think it will be years before I taste something like it again. 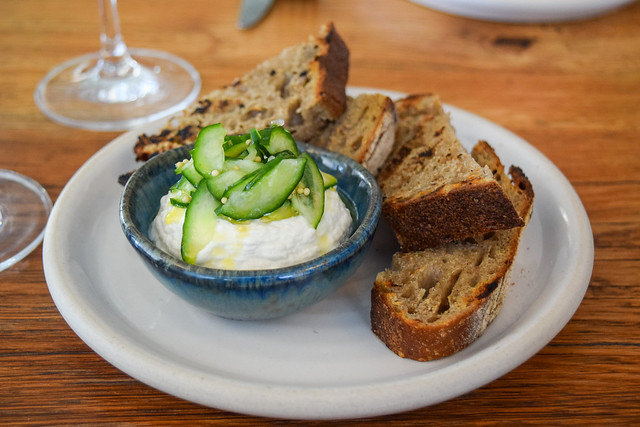 Now, onto our tasting menu, where, for £50 a head (which works out really great value when you see the prices a la carte of some of the things you get – most people eating in the restaurant that evening were enjoying it – and were locals, which is lovely to see in an oversubscribed restaurant with a Michelin star) for several sharing plates off of the main menu, a special dish and a couple of desserts to share. To kick things off, a smoked mackerel dip arrived topped with pickled cucumber and served with sourdough toast. It was fresh, it was fishy, it was light and it was bright, a really great way to kick off the meal with something traditional done perfectly. 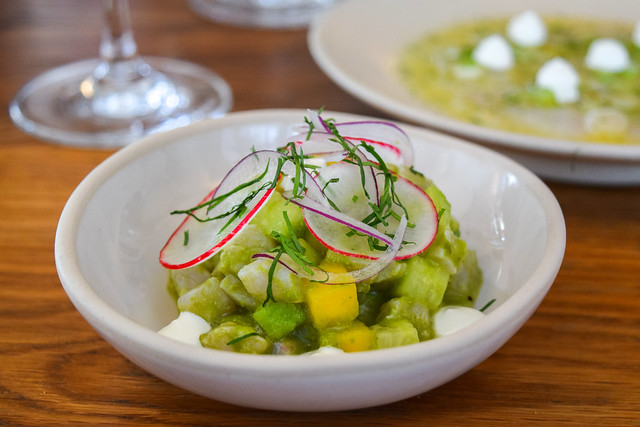 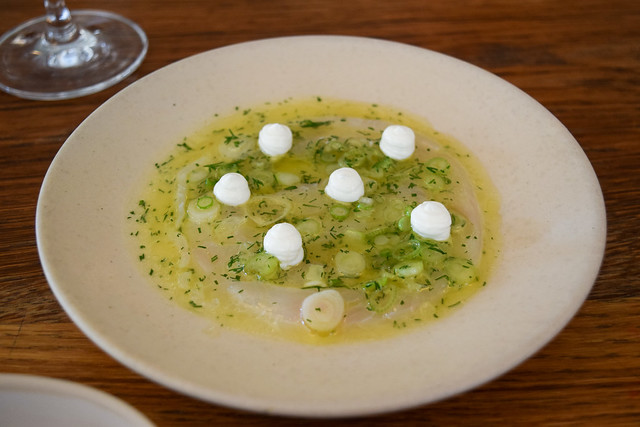 Next we had what are usually my favourite parts of the menu, the ‘raw’ items. The grey mullet ceviche with green chilli, radishes and mango was fresh, meaty and punchy, really beautiful with a riot of bright colours and flavours. On the other hand, the cured brill with spring onion and ginger dressing, and a few little piped points of soured cream to bring a bit of richness melted in the mouth, and was gone all too soon from our plate. 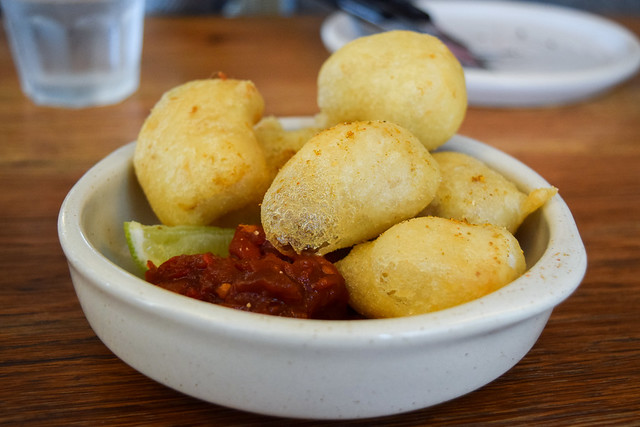 Next came a dish I’d probably not have ordered for myself if we were going a la carte, but I simply adored: crispy ling served with a homemade chilli jam and a squeeze of fresh lime. I’ve never had ling before; it is a slightly terrifying looking long fish, with a very firm, light white flesh. Here it was perfect down in an impossibly light tempura-like batter, and the chilli jam on the side was unexpectedly perfect served alongside each bite. 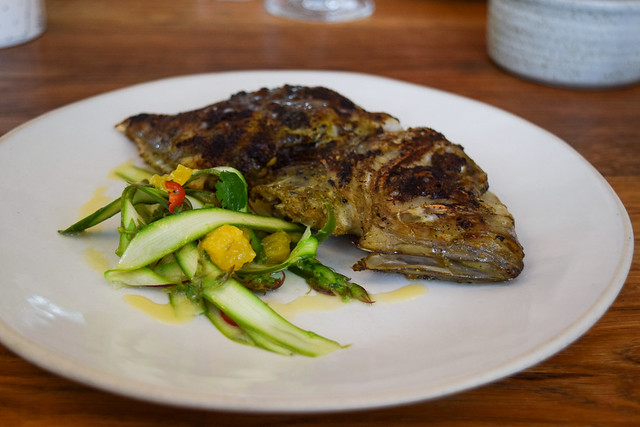 Finally on the savoury side came our impossibly good special, a small john dory each, marinated in garlic, rosemary, chilli and orange, before being charred and served alongside a shaved asparagus, orange and chilli salad. The flavour was amazing, took me right back to the Med. It was light, but still substantial, and made the menu really feel like a journey, rather than a random selection of small plates. Also, at the time of writing I may or may not have a couple of fish fillets in the fridge ready for a similar marinade for a dinner time treat! 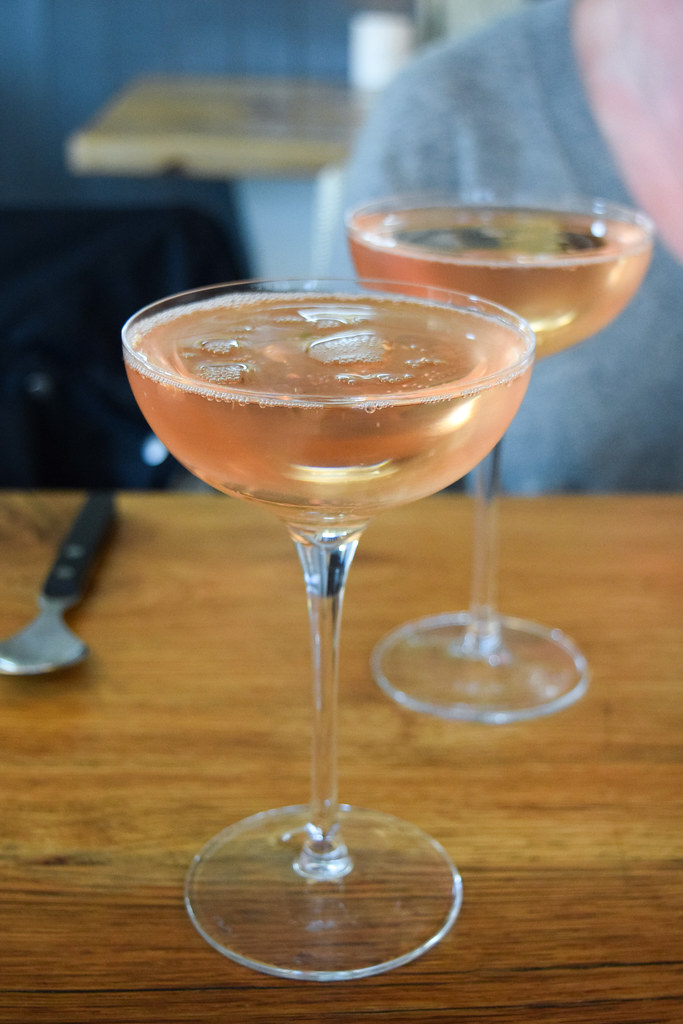 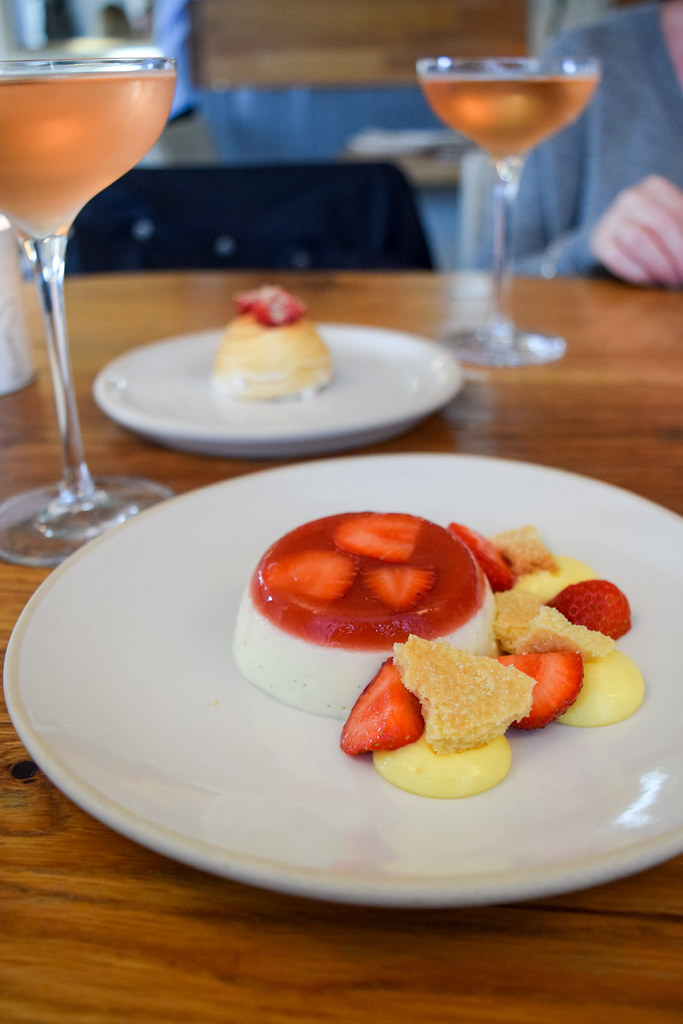 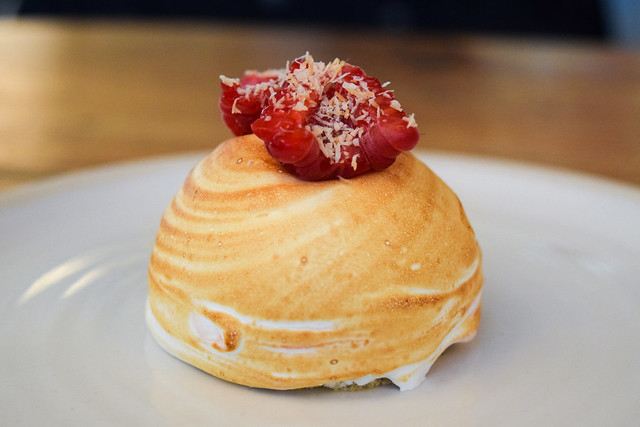 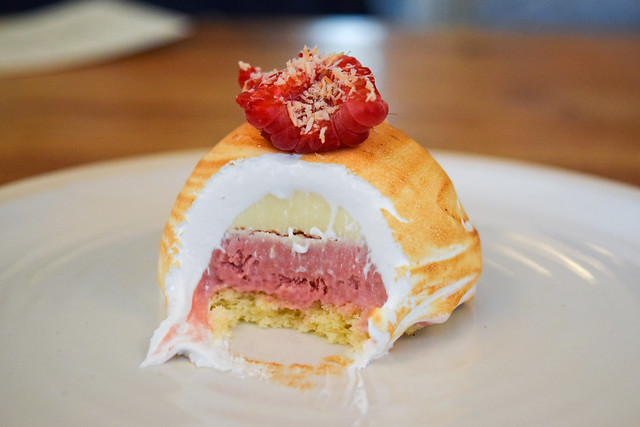 To go with our desserts, we ordered a couple of glasses of pink sparkling wine from Camel Valley (you can read all about my trip there and tasting with Cornish Wine Tours here) which went beautifully. First came the strawberry and vanilla cream served with lemon curd and shortbread which was nice (and which was also what my father ordered), but the real star of the show (which was the very best thing I ate on the trip, and tied for first place as the best dessert I’ve ever eaten – with the coconut lime macron with black sesame ice cream at The Compasses Inn, which made me cry the first time I ate it, in case you were wondering!) was the coconut and raspberry baked alaska – we even ended ordering a second one! The toasted marshmallow coating was sweet, soft and nicely caramelised, and the layers inside were sweet, and each fantastic on their own merits. The fresh raspberry and toasted coconut on top were a beautiful bright crown, and a lovely little surprise that I did not remember to capture on camera (I was too obsessed with the dessert!) was a hidden heart of fresh raspberry coulis. 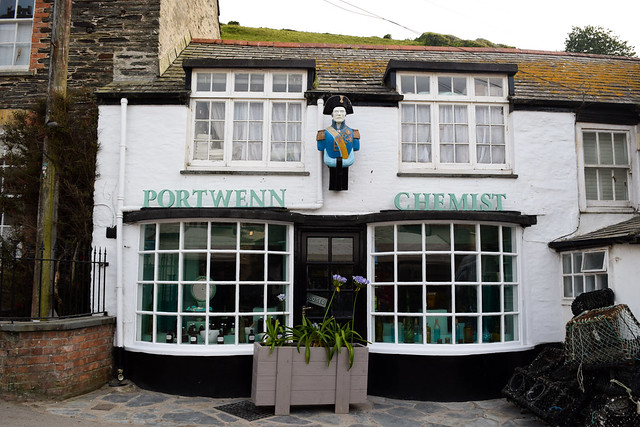 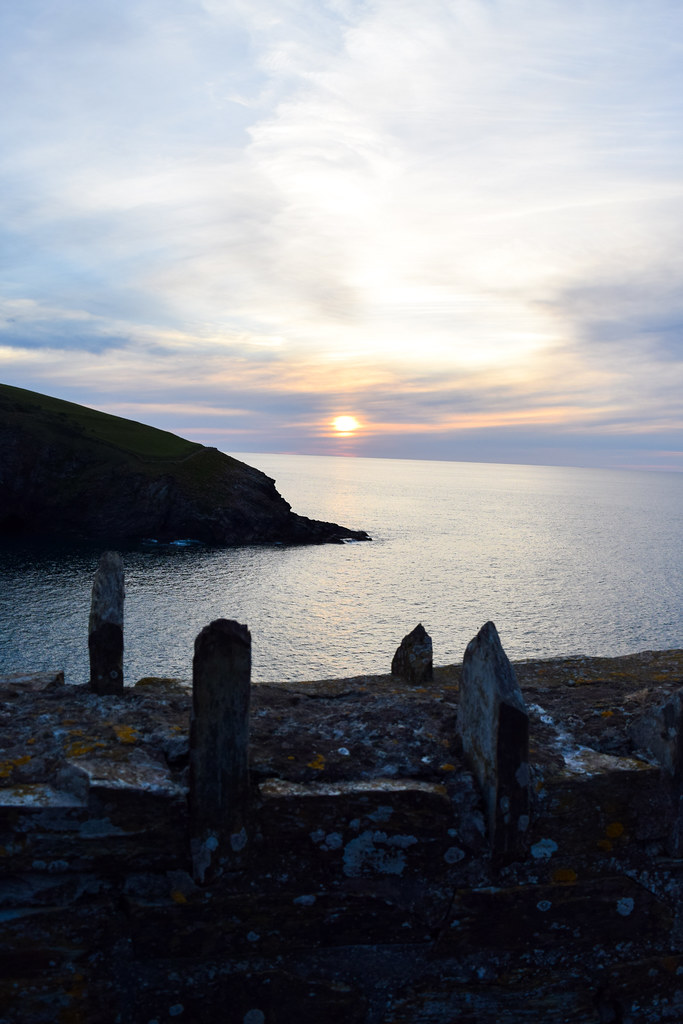 As we walked back through the town, stopping to look at how some of the shops had been transformed for filming and watching the sun go down over the sea we reflected on a truly special, truly memorable meal. The service was friendly and flawless, the food outstanding and the atmosphere is cosy. You need to book well in advance, so make it the first thing you do after booking your hotel for your next trip to the North Cornish coast. 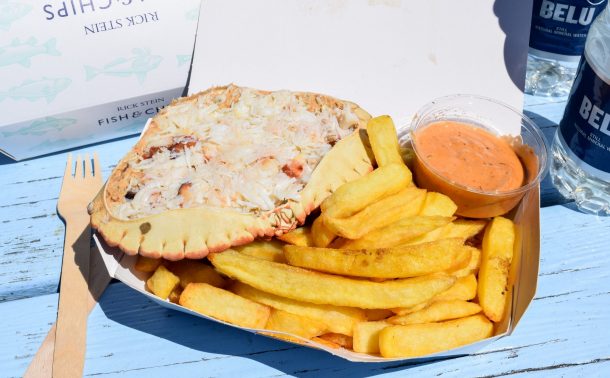 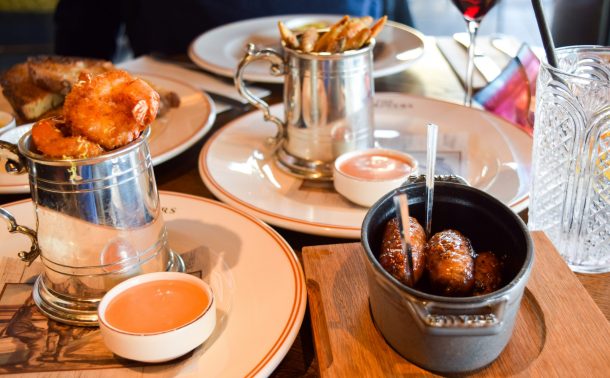 Eating Out Places To Eat In Cornwall: The Mariners, Rock 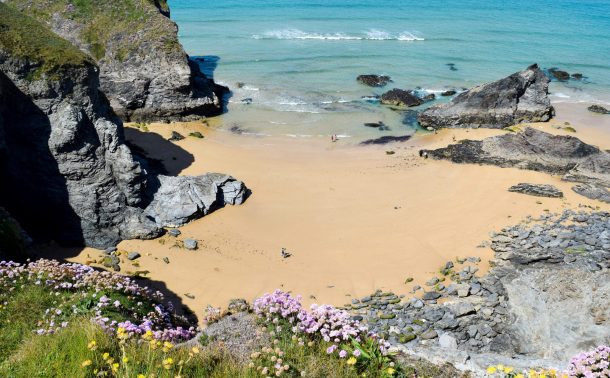