I reviewed Wyatt & Jones years ago. A small, family run best-of-British smart casual restaurant right by the seafront in Broadstairs I loved its simple dishes and stunning desserts, but now lockdown have allowed them to change things up a bit (as well as open a fish and chip shop which is still near the top of my to-do list, Flotsam & Jetsam, next door) I think I love it a little bit more.

Honestly, I’m over the moon they invited me along to lunch at the weekend because every plate was not only delicious, but they were creative too, mixing British ingredients with Spanish influences and the odd Asian flavour, creating somewhere I will be going back to (I love trying new places so much I often don’t repeat them), and not just because we seriously over ordered and therefore had no room for dessert!

We kicked things off with a couple of aperitifs, and some snacks. J had a beer (keeping things light, we’d not yet made the decision who was driving home!) and I had their ‘something non alcoholic’ with tonic which was lovely, and did not really taste like a lesser substitute, which so many are becoming these days.

I had a Hogwash oyster (an alternative to the classic mignonette made with jalapeño, shallot and mirin) which was bright, fresh and briney, before we both dug into the bread. Now, for some time seeing what fun butter or spread a chef sends out with the bread course has been a meal highlight for me, but Wyatt & Jones have taken it to a whole new level giving you three to choose from: chargrilled sourdough (their grills are a big part of the draw at the new Wyatt & Jones), with potted shrimp butter, sourdough with a smoked cultured butter, and our pick, chargrilled with a sobrassada butter, heady with verdant marjoram. Beautiful flavours, and an indulgent start to the meal, the sausage-flecked butter was a real treat for scooping and dunking. The best choose your own adventure to start the meal.

Moving onto the cold plates section, we had a beautiful burrata on a bed of ajo blanco (a much thicker version of the classic chilled Spanish almond soup, a bit more like this homemade almond tahini) with coal-roasted candy beetroots, roasted peaches, and a wonderfully sharp puree I needed more of which I think was peach (?) and a few tarragon leaves. The flavour was beautiful. Rich, creamy, fruity, earthy, as mentioned my only issue here was balance, it needed a few more of the colourful tart bits to cut through the wonderful mass of creaminess created by the combination of the massive cheese and the almond puree.

Next, alongside a delicious glass of French rose came the very best thing I ate at Wyatt & Jones. A meaty, fresh tuna tartare on a bed of something yellow and so delicious I did not really put too much effort into identifying, draped with shisho leaves and sprinkled with togarashi. Yes I know we’re talking about a lot of things I already love together on one plate, but the balance, the freshness, the flavours, the hint of the unusual, this tartare was addictive. If it is still on the menu when you visit, you’d be an idiot not to order it.

Next, we moved onto the ‘things over charcoal’ section with a whole John Dory, beautifully charred over an almost-too-savoury but still rather brilliant house made XO sauce with a charred lime half on the side for squeezing. Now, J had never had John Dory before, and I’d never had it fresh off the bone, and it turns out neither of us are much of a fan of it, either for its flavour or it’s texture. It is testament then, to the delicate char, the perfection of that sauce and the pitch perfect application of transformed lime that we polished the whole thing off.

Now, I mentioned that we over-ordered. This is J the meat lovers fault, unwilling to choose between the UK Ex-dairy sirloin with roasted Jerusalem artichokes and salsa verde, and the Mangalitza pork chop served with a wholegrain mustard butter, blackberries and more tarragon. He admits now it was too much meat for us to get through, so whilst we regret nothing (both dishes were incredible), choose one when you visit, not both!

Turning to the actual dishes, the beef had the most incredible rich flavour and was perfectly cooked, punctuated by the punchy salsa. This was my favourite, but J preferred the impossibly tender pork with it’s nutty mustard coating (such a treat these days!) – literally my only criticism was that it needed more blackberries as their dusky inkiness cut through the pork beautifully.

A quiet star of the meal, another of my favourite dishes and yet another thing you simply must order was the layered crispy potatoes, served on a pretty plate of bravas-style tomato sauce, and creamy aioli. Crisp, just salty enough the sauces go with it beautifully, and yet again, like everything at Wyatt & Jones it really did taste as good as it looks.

Now the summer is over and it will become easier to park on the seafront (!) run, don’t walk to booking your table at Wyatt & Jones here. Thanks so much again to the team for inviting me along! 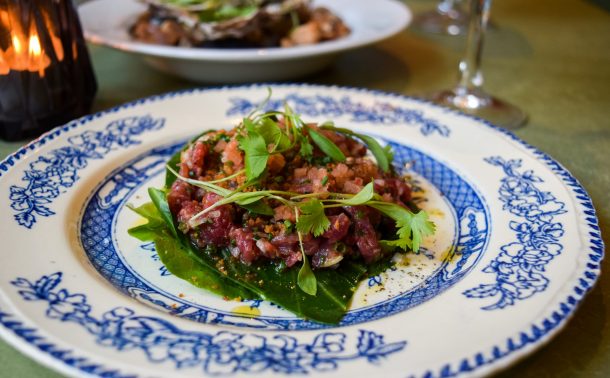 Eating Out Places To Eat In Deal: The Rose 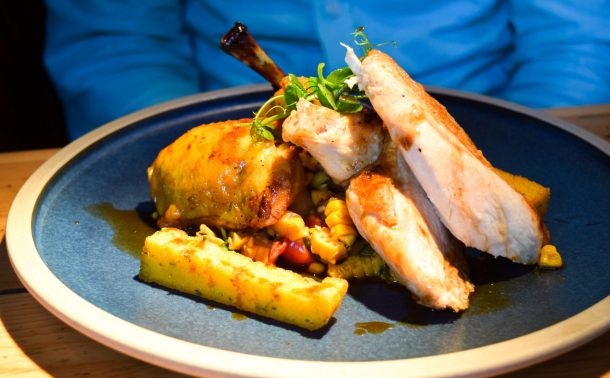 Eating Out Places To Eat In Kent: The Tiger Inn, Stowting 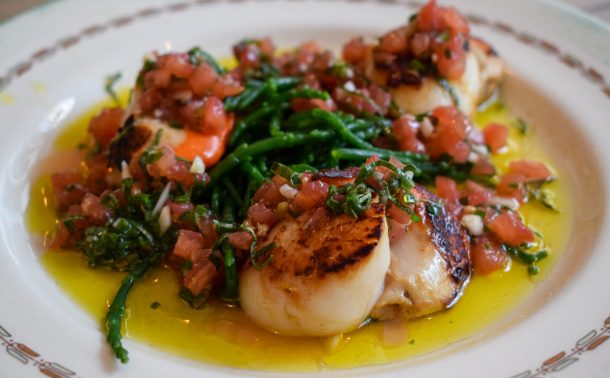 Eating Out Places To Eat In Kent: The Folkestone Wine Company, Folkestone