Can I just start with saying that Hotel Motto in Vienna, Austria’s capital city is the best city hotel I’ve ever stayed in. Yes, there are countryside haunts I’ve adored (sometimes multiple times) such as Manoir de Malagorse in Cuzance (France) and Trewornan Manor in Cornwall, but this is the very best place I’ve stayed in in the middle of the action.

Yes it is not the most central place you could stay to see all of Austria’s sights – it is about 20 minutes walk from the main Hofburg palace complex – but it is too nice, the staff too friendly and helpful, and the food and cocktails too good at Chez Bernard, the rooftop restaurant to put a damper on things – and in a city with Uber and an underground station on the same corner as the hotel, it honestly did not matter?

Now, I must also apologise that my photos here I don’t think for once share the full beauty and vibe of the hotel; and I’ve missed some things – because it was too cold to drink up there in the off season we forgot to head up to the roof terrace for the view out of Vienna for example – and I could have focused more on the art in the hotel, and there don’t seem to be any photos on my phone from Saturday night when we went up for drinks after we’d been out for dinner… but I really think this highlights how good Hotel Motto was. It was comfortable, relaxed, and we both already miss calling it our home.

Shall we start with our room? We originally booked a ‘CHIC‘ room (starting at 188€ / £164 / $203 a night) but when we arrived they upgraded us to the ‘DELUXE‘ (starting at 209€ / £182 / $225 a night) which we adored. Every design element had been thought of and everything was extremely comfortable: especially the bed, pillows and adjustable air conditioning. Honestly we’d had such a terrible start that morning both being awake at 3am in our terrible airport hotel and deciding to just head on over so we could be awake in the airport lounge instead by the time we made it to our room in Hotel Motto we took a shower, snuggled down in bath robes and napped until dinner!

I know this is a lot of bathroom pictures, but there are several elements about our rooms bathing facilities we wish to exist in our home one day. For me it was the shower; I usually loathe wet rooms, but a whole tiled shower room with a step down, closable door, two way mirror, rain shower and a shower head that actually has the temperatures marked on it for actually logical temperature control? I did not want to get out of it at first, and I already miss it. Oh, and I was also a massive fan of their shower gel / scented candles in reception by Saint Charles with a lovely, herbal scent that put them up there as top notch hotel toiletries.

It was J who loved the toilet; hidden away by a tapestry wall and wonderfully old fashioned.

As for everything else in the hotel, shall we start with the bar? As I mentioned I have no photos of the night we sat there sipping Cremant people watching the locals (it seems to be a local hotspot), but before heading out to dinner on the first night we indulged in some of the fruity, tropical flavours that seem popular throughout the city. Directly above us we have the Whaam! made tall and tropical – Vienna seemed to love tropical flavours on their cocktail menus – with two types of rum, falernum, pink grapefruit, cinnamon syrup, lime and herbostura. I think this one would be great to sip on their rooftop in the summer. In the foreground we have the Judith und Holofernes (named after the Gustav Klimt painting), still tropical but a bit more smokey and sophisticated with white tequila, honey rosemary syrup, fresh ginger and a good dash of fresh lime.

The night we had dinner at Chez Bernard, we both found our new favourite cocktail at the bar: a Grand 75. A twist on my favourite French 75 cocktail, the gin is replaced with Grand Marnier, and whilst the lemon juice element stays, to give the orange in the liquor a lift it is finished with an orange twist. We had gloriously too many of these…!

At Hotel Motto, you have two breakfast options: the speedier of which, which is also what we opted on our big day of exploring heading out to the Schönbrunn Palace on the outskirts of the city (more on that to follow!) is to grab a bite to eat at Motto Brot, their French-inspired Viennese bakery underneath the hotel. They do cakes and sandwiches for the rest of the day, but whilst J opted for a coffee and a French-style croissant, I had a delightful vanilla custard and sour cherry pastry which was excellent on the go – and which I went back for another of the day we left!

Of course you can head up to Chez Bernard for breakfast proper, which we did on the Sunday morning where we were very lucky to slip in without a reservation – you can easily do it in English online, but this is a restaurant you need to book it is so popular with the locals! Along with our delicious juices and smoothies (I had ‘Red Velvet’: beetroot, apple, strawberry, lime and agave which I very much enjoyed, J had a creamy ‘Berry Power’: raspberry, blueberry, banana, linseed, maple syrup, cinnamon and oat milk) we both chose one of their special breakfasts.

On the left you’ve got J’s excellent twist on a classic continental breakfast, the ‘Belle Vienne’ which came with a perfect soft boiled egg, an Austrian brioche croissant (I’m really glad we tried one but far too sweet we thought for a breakfast food!) apricot jam (everything is apricot in Vienna), raw cultured butter, chopped chives (they’re everywhere in Austria) some of their excellent neunerlei bread (seedy bread made with a traditional German spice mix) and a homemade nougat cream which, again, was too much for breakfast but which was so incredibly rich, good and addictive we wished they sold it in jars.

One for more of a savoury breakfast, I had the ‘Saint Martin’: home pickled salmon, a light dressed frisse salad, another excellent piece of neunerlei bread, an excellent and unusual honey pumpkin chutney, and a baked piece of creamy, seeded goats cheese. Like J’s breakfast, both familiar, unusual, and very, very tasty.

Honestly, even if you’re not a guest at the hotel but you’re in Vienna and like to do brunch, it is worth a reservation.

On the Monday night, again as we knew we would be exhausted for our most intensive day of exploration planned we booked dinner at one of their cosy restaurant tables after a few Grand 75’s at the bar. The menu is a delightful mix of French and modern Viennese made with French techniques which as we found Austrian food a bit challenging in how heavy it is and, at least in traditional restaurants, how little vegetables there were, we adored.

It was the only restaurant we saw a good seafood selection (unsurprising for a land locked country, though I was fascinated – though I’m not sure in a good way – by Nordsee, a chain restaurant I saw all around the city that sold cooked chips and scampi, half iced lobsters, and sushi as some of their eat in or to go selection. Typing this now it does not seem that strange, but so used as I am to Britain, France and America, it really was…) so I started my meal with a frankly beautiful trio of Fine de Claire oysters which were a real treat – as we have so many great native varieties, they’re not so common on British menus. Also, the Chablis they recommended by the glass to go with their seafood selection was excellent also, and a perfect pairing.

Accompanied by a sublime bottle of Cotes du Rhone (we loved the Austrian wine, though loving all the whites he tried there were a few reds I loved J was unsure about so ordering a whole bottle we wanted to play it safe) he had what he described as a frankly excellent Coq au Vin with tender, perfectly cooked chicken.

I went for a French-style twist on the dish of a roast duck leg served with red cabbage and sweet potato I’d seen about Austrian menus: here the breast was perfectly cooked with a side of beautifully spiced cabbage and cranberry sauce. My sweet potato was also excellent, sweet and smoky, though I quickly swapped it for the bowl of traditional buttered (though sadly not pictured) Austrian dumplings that came with J’s dish. So, so good.

The side dish we ordered of their frankly excellent fries is also highly recommended: crisp, addictive and topped with melted comte cheese, they come with an addictive truffle mayo for dipping that really was a highlight. Eating around Austria J, who usually dislikes truffle ate a lot of it and found himself enjoying it: the answer is in Vienna it is always fresh black truffle used, than the white truffle flavoured oil usually used in things, which makes their truffled items on menus something to seek out.

The only slight let down of the meal is that their desserts were nowhere as near as good looking as the cakes in the Motto Brot pastry case downstairs: I had the Mont Blanc with cranberry sorbet which was tasty, but I ended up leaving the vegan meringue base. However, the meal was finished with a delicious digestif recommended by our server I’ll be seeking out a bottle of now we’re home: a lemony Amaro from Italy called Averna.

Honestly, we can’t recomend our stay at Hotel Motto enough: it was super comfortable, the staff were super helpful and friendly with all the little details (fetching plates, forks and napkins from Chez Bernard to our room the evening we brought back cakes from Cafe Central for dessert, when I forgot my scarf in the restaurant checking the room number on our bill and coming down the stairs to be at our door with it when we emerged from the lifts) and the food and drinks on hand are both delicious, and Austrian enough for you to feel like you’re not missing out. 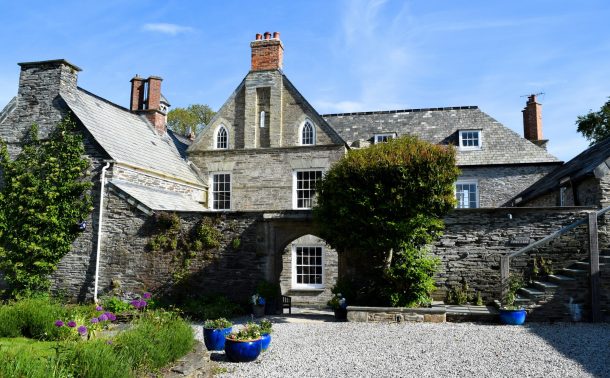 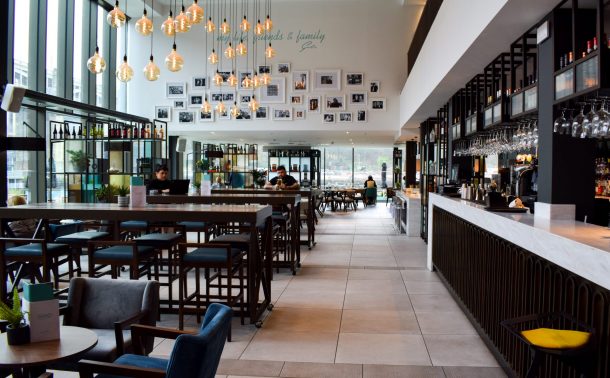 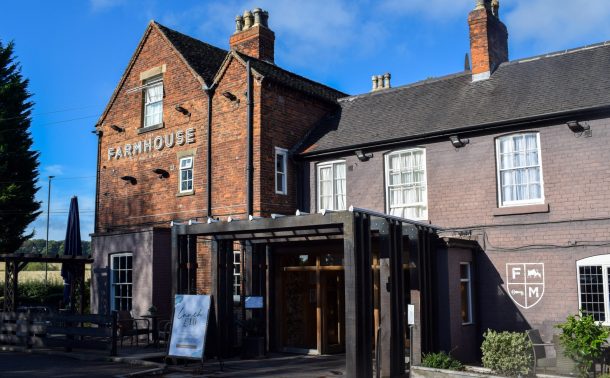 England Places To Stay In Derby: The Farmhouse at Mackworth