I’ve been so incredibly lucky that in my life before I was even 20 I’d been to so many amazing places. I’ve been all over the Mediterranean and all around the Baltic states. I’ve lived in America, and I was lucky enough to be able to visit the Middle East before it became such an area of contention once again. However, nothing could have prepared me for the sheer breathtaking natural beauty of some of the things I have seen over the past two weeks. Not so much in Scotland, but the one thing that really stays with me from Norway and Iceland is how many brilliant shades of blue you can find in ice and water. Words and pictures can only be pale imitations. 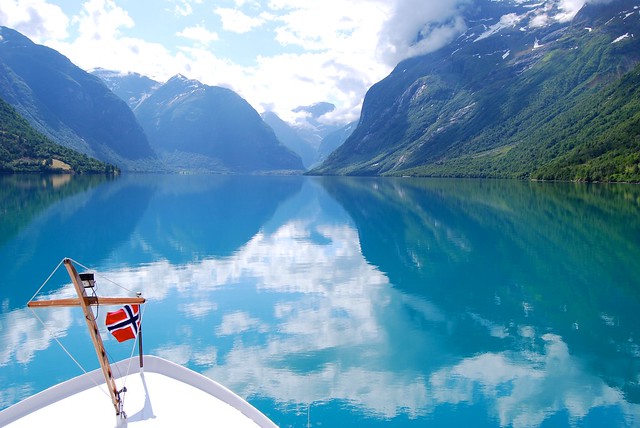 I’m going to fill you in on some of the places that I’ve been, and I’m also going to put together a few posts with photos I took from the boat of the stunning Fjords we sailed through and of some of the jewel like sunsets I witnessed out in the middle of the North Sea. However, let us first start in the tiny waterfront town of Olden in Norway, found on the southern shore of Nordfjorden, the 6th largest fjord in Norway where we first disembarked after spending two relaxing days at sea, relaxing, reading and drinking many gin based cocktails. 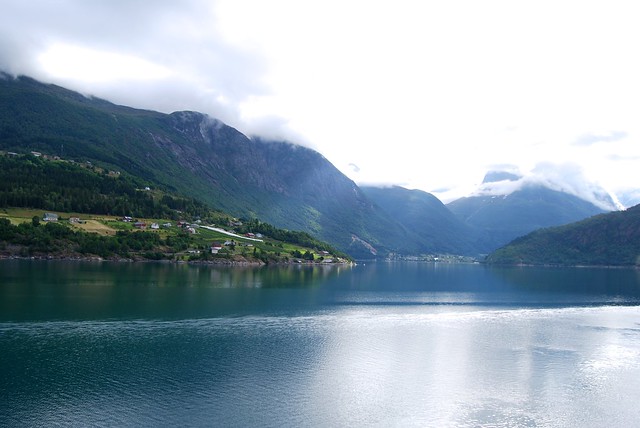 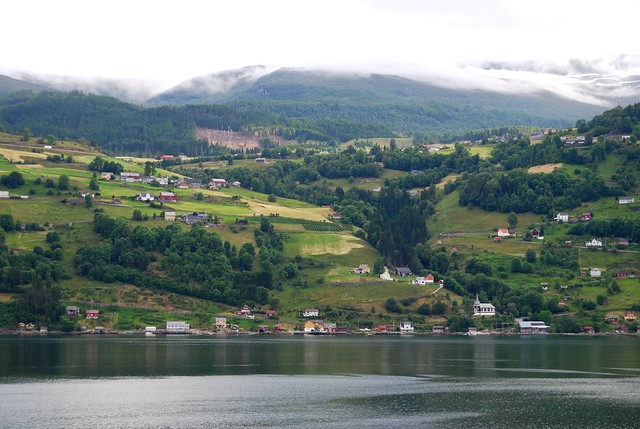 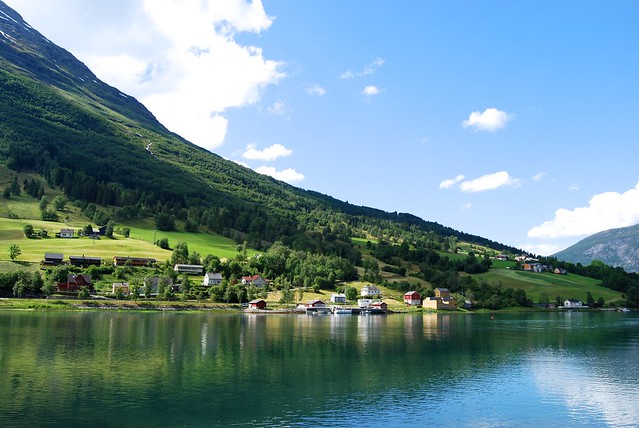 I think a cruise ship is the best way to visit the Fjords, because rather than arriving at your destination over land, you can sail up the little inlets and watch the pretty little waterside settlements pass from your balcony, or out the window while you’re eating breakfast. The natural landscape here had me so fascinated; it is so removed from what I am used to. Life is so much simpler and greener. The sheer beauty and majesty makes it really hard for me to try and put the experience into words. I was also blessed with beautiful weather. 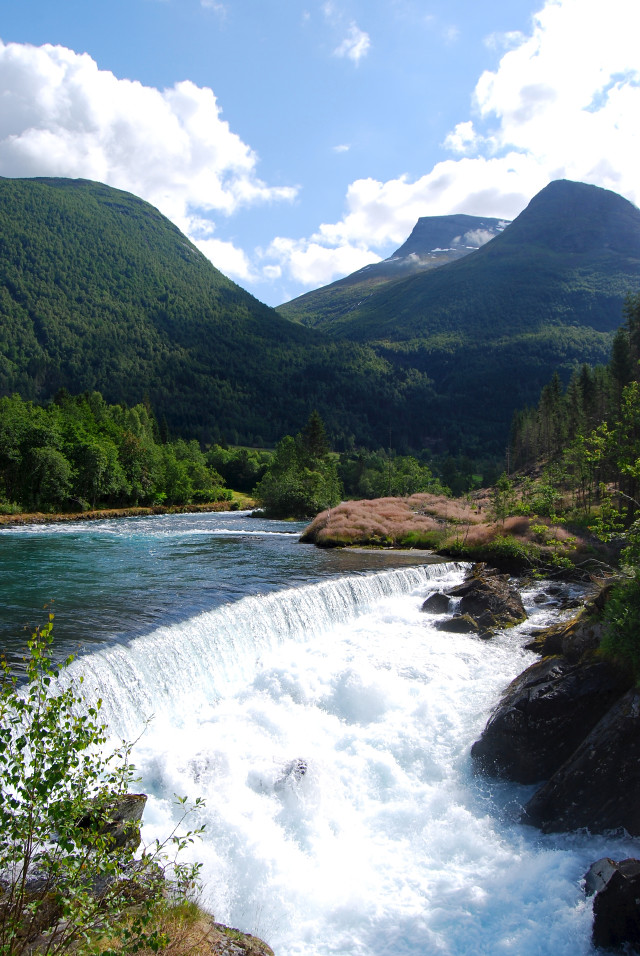 The plan for the day was to go boating on Lovatnet lake, stop off for a bite to eat and then go check out the Kjenndalen Glacier. While all of these things were all amazing, it was the drive to and from the lake that also really captured my imagination. Ever wanted to know where your Norwegian salmon comes from? This is a waterfall in the middle of a salmon river just outside of the town. 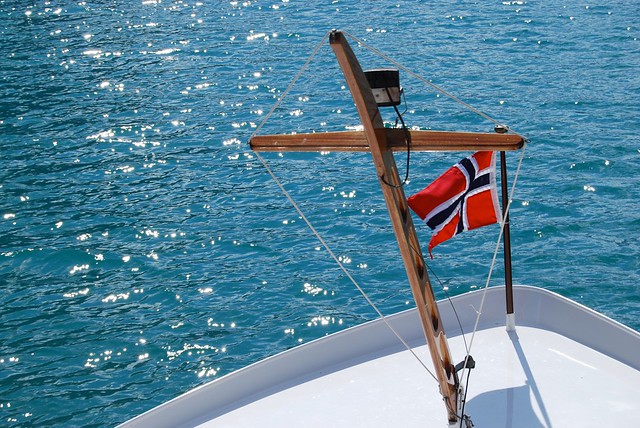 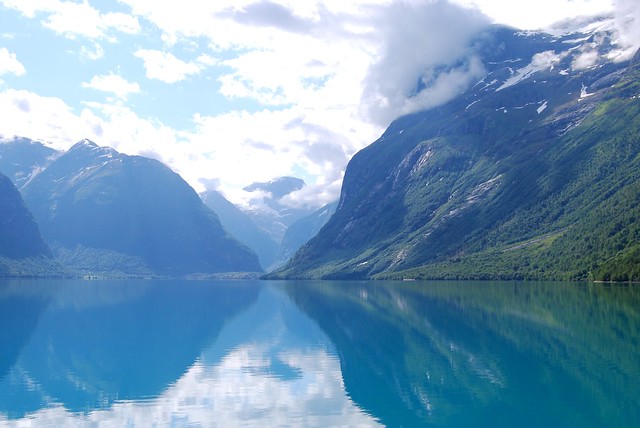 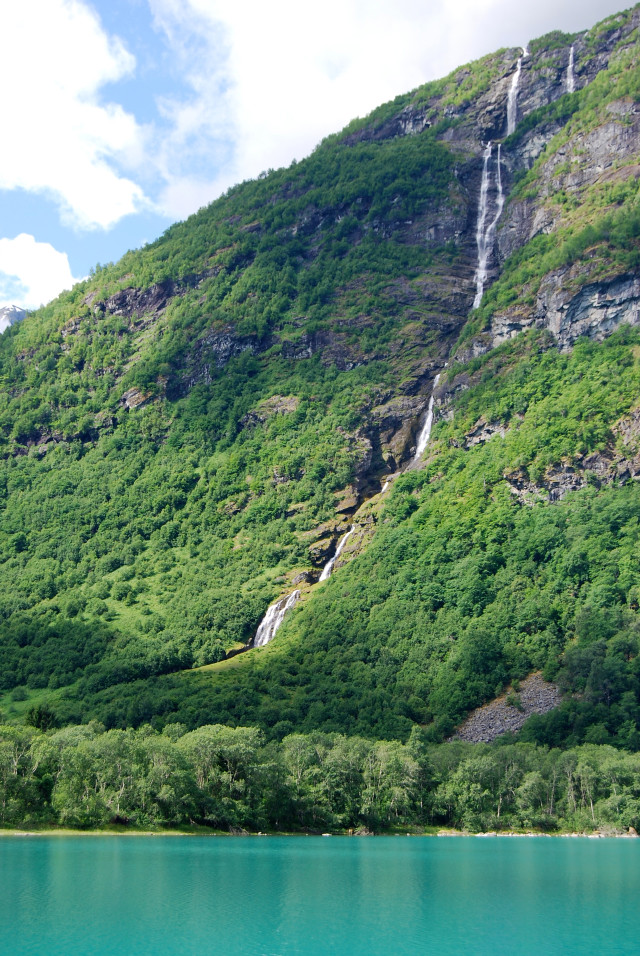 With the binoculars earlier that morning while we were sailing up the fjord from my balcony, and later out on the lake, one of my favourite things to spot were the thousands of little waterfalls making their way down the sides of the mountains little little dribbles of icing cascading down the side of a cake into the brilliant blue water. No, I have not messed with that blue in Photoshop. The colours changed with the sun and the depth. 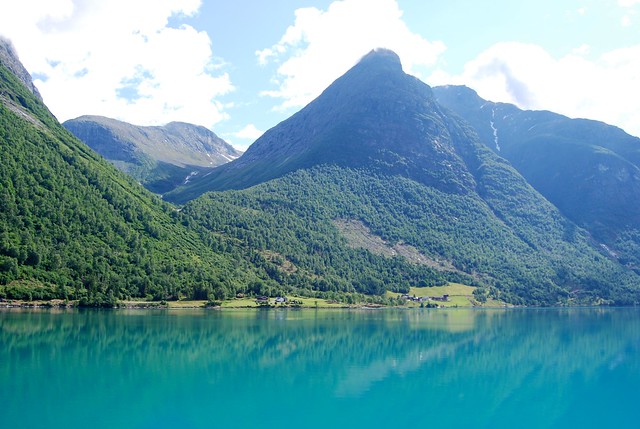 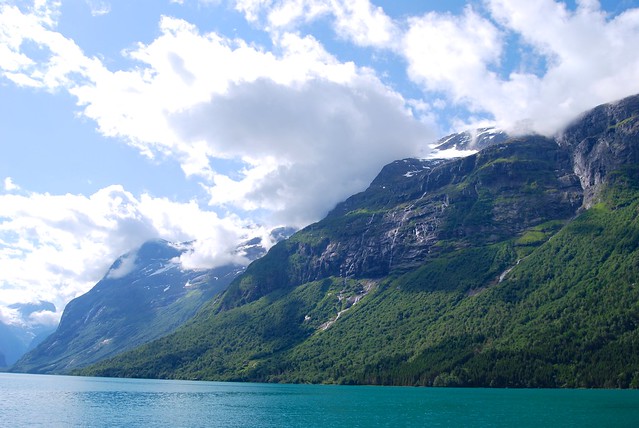 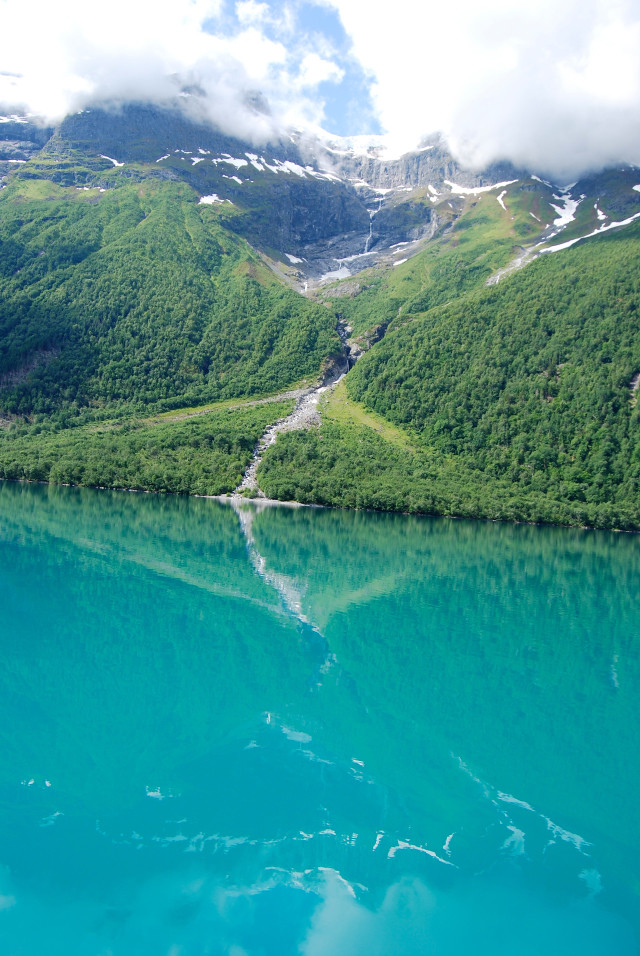 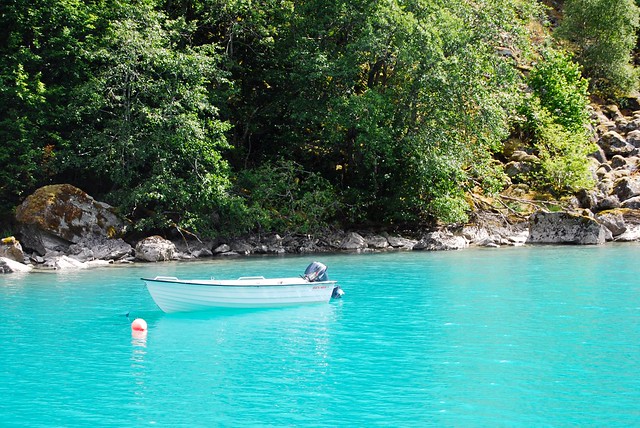 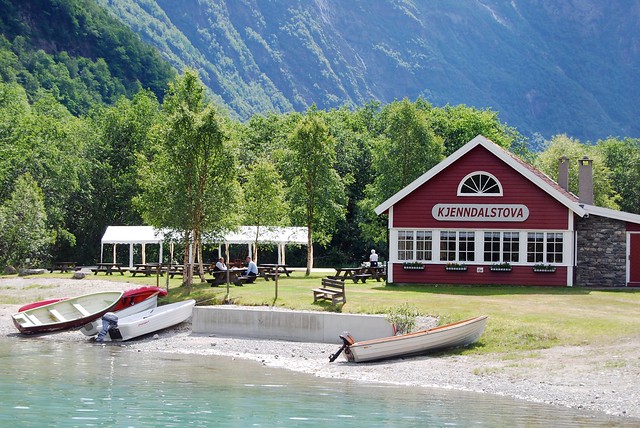 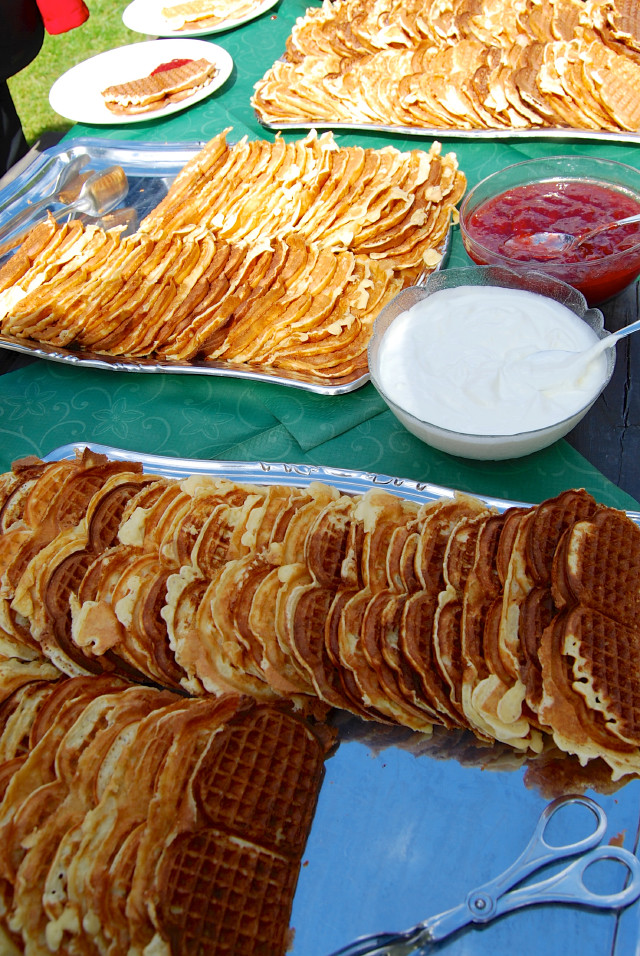 We stopped at a waterside cafe for traditional Norwegian waffles, served the typical way with sour cream and strawberry jam. The locals way lyrical about their strawberry jam, and with good reason. The waffles were unlike any waffles I’d tasted before, and I’m pretty sure that I ate way too many of them. They’re made of something a bit more like a pancake batter in taste, but much denser while still being sweet, chewy and light. And American Waffle/ Pancake hybrid if you like, and something I’ll be experimenting with once I let myself have treats again. After two weeks of many sugary cocktails, desserts and three course dinners every night I need to go for a little bit of clean, healthy eating for a while! 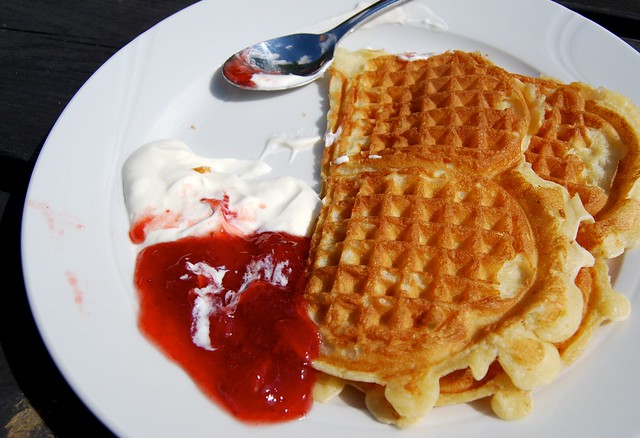 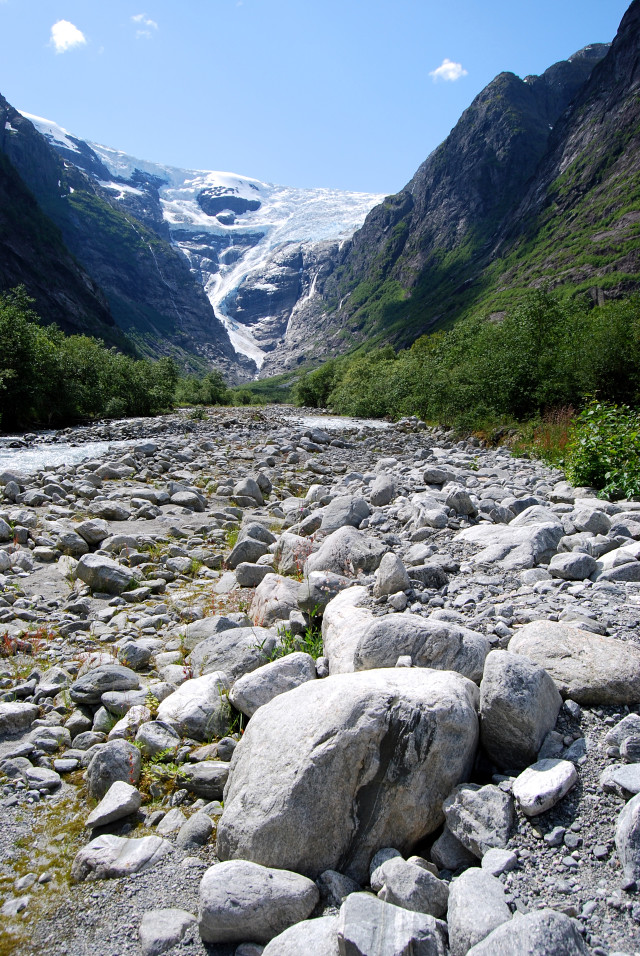 Kjenndalen Glacier, at the end of the Lodal Valley is unlike anything I have ever seen. At first, when I saw the arms of it stretching out across the mountain tops I thought it was snow, rather than a great body of brilliant moving ice. It is not really something you can photograph, the way the sun and the ice interact to create the whole spectrum right in front of your eyes, but I promise you that is something you need to see before you die. 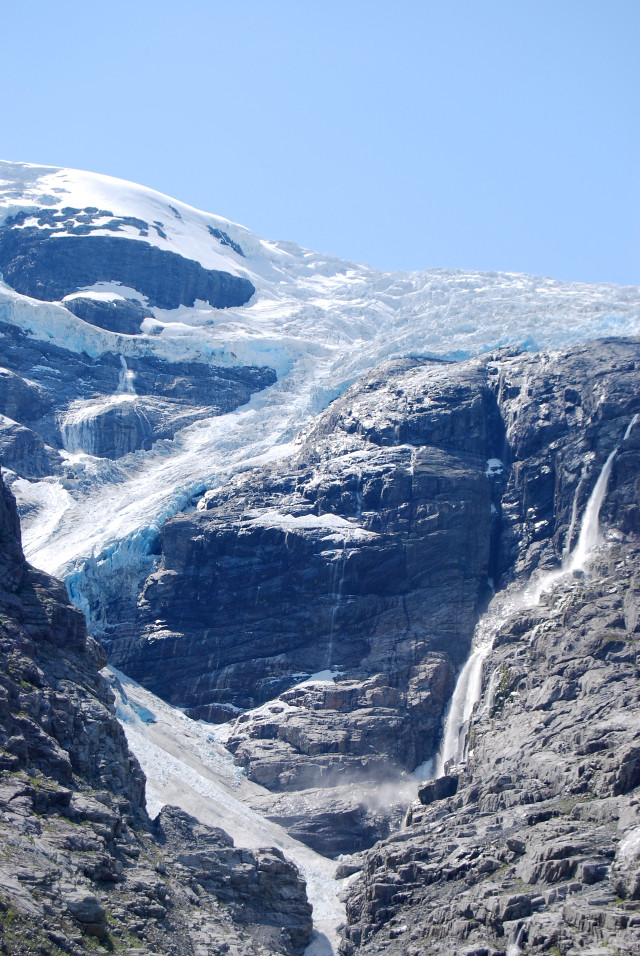 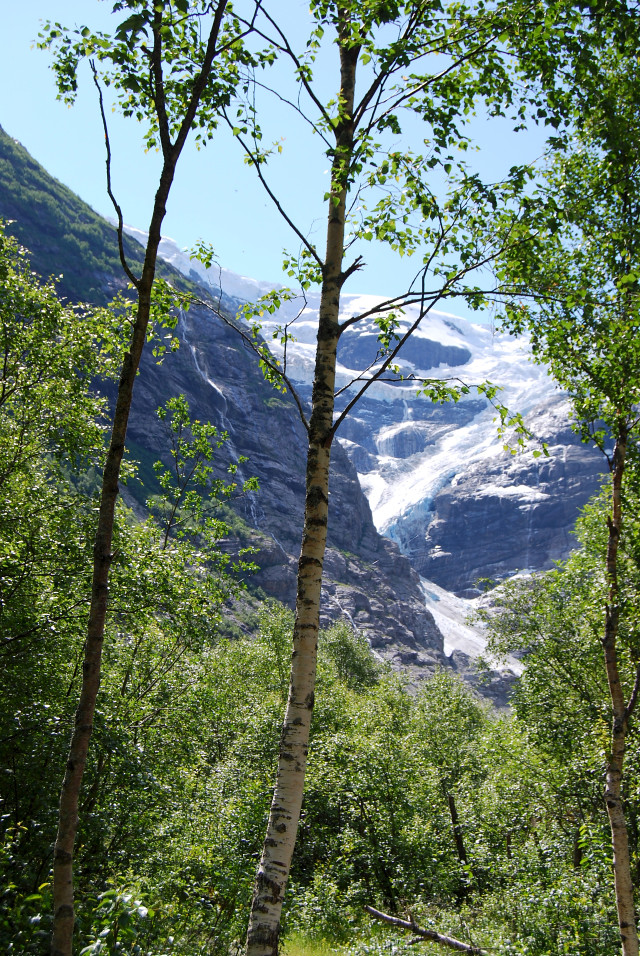 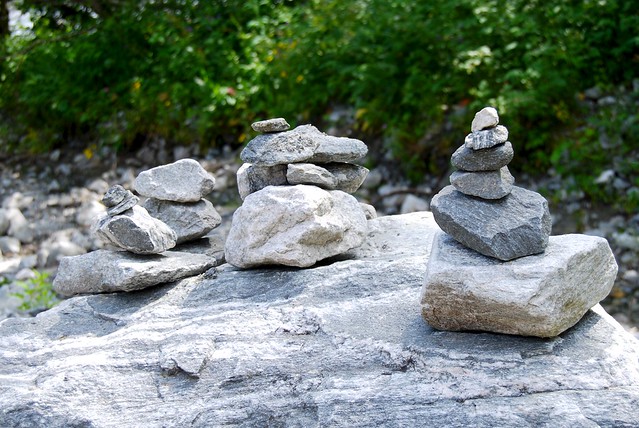 I little quirk I loved about areas of natural beauty in Norway were these little piles of rocks. People made them, and tried to find their piles of stones when they came back, sometimes even years later. Our local guide told us that it had worked for her; not disturbing other peoples stones is something that people are respectful of, which I think is lovely. I did not leave a pile, as I want to see a different glacier the next time I visit, but I wish they did this in Iceland! Noway was beautiful, but Iceland captured my heart. 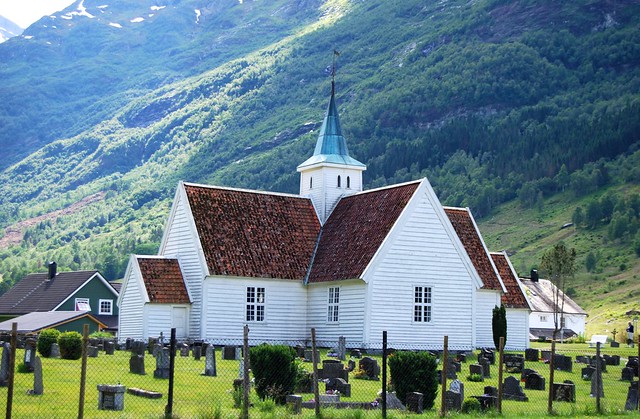 Before getting back on board the boat we took a little stroll around Olden itself. Honestly, it is such a small town it is really a destination to use as a base to visit the countryside, rather than a tourist spot in itself. However, its old church (built in 1759) was so beautiful, and all uniquely wood panelled inside.

What I’ve just shared with you is honestly just a taster of Olden, and going through my hundreds of photos trying to decide what to share with you guys was overwhelming enough. It has been almost two weeks since I arrived in my first port, and I have so much more to show you. It is going to take me a while to go through all of my photos (I have not even looked at Reykjavík, and Orkney is still on my camera), but hopefully I’ll be able to get Norway part two to you guys sometime next week. 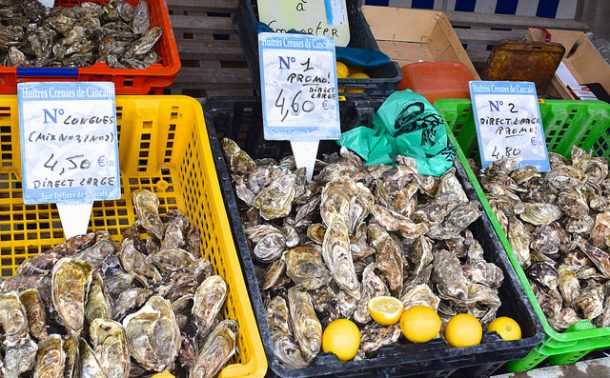