As it was on both of our ‘to try’ lists and in a good, central location for both of us, late Thursday lunchtime found Izy and I engaged in our latest catch up / blogging gossip / cookbook discussion session at Flesh & Buns. She wanted to know how my freelancing was going, I wanted all the gossip about her new cookbook out today (I took mine with me so she could sign it, you can order your own copy (it is rather fantastic and I’ll be writing a full review soon) here), and we both wanted to eat our fill of meat, sushi, sashimi and s’mores. 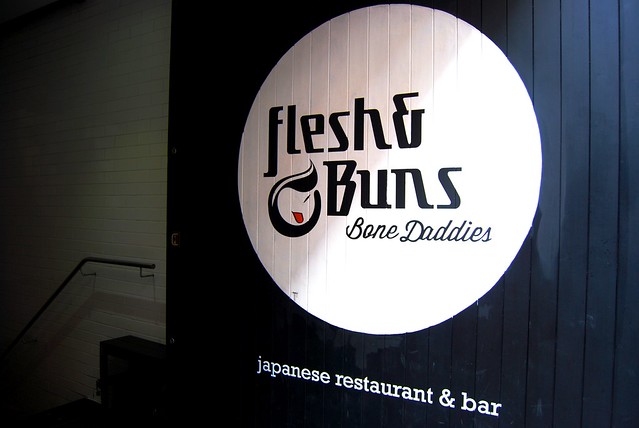 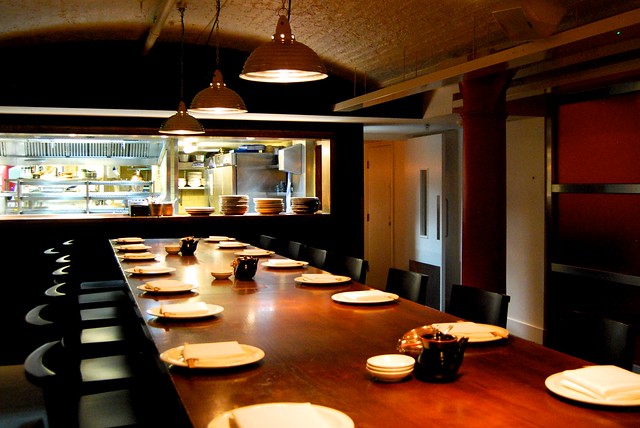 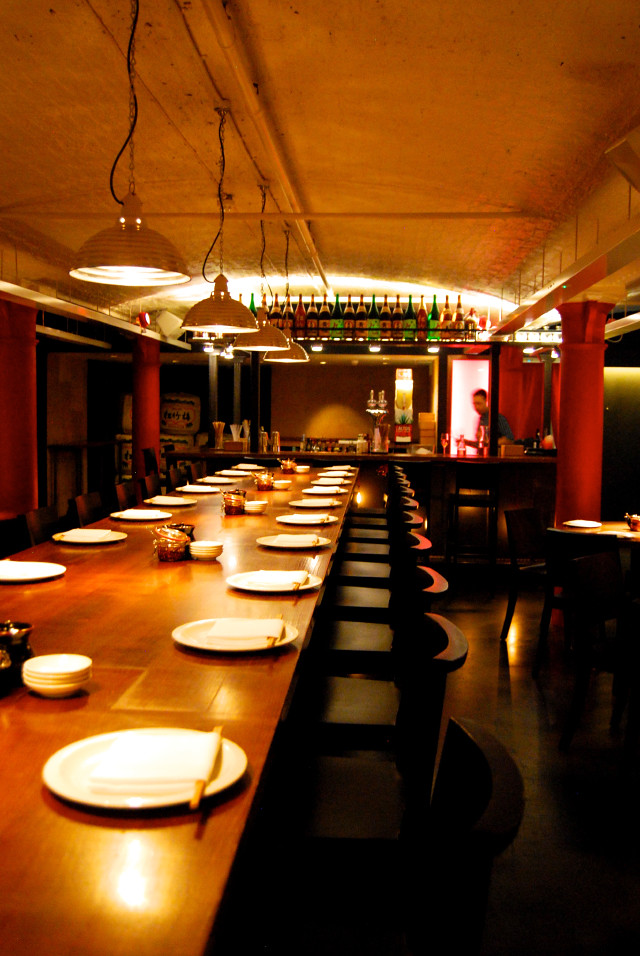 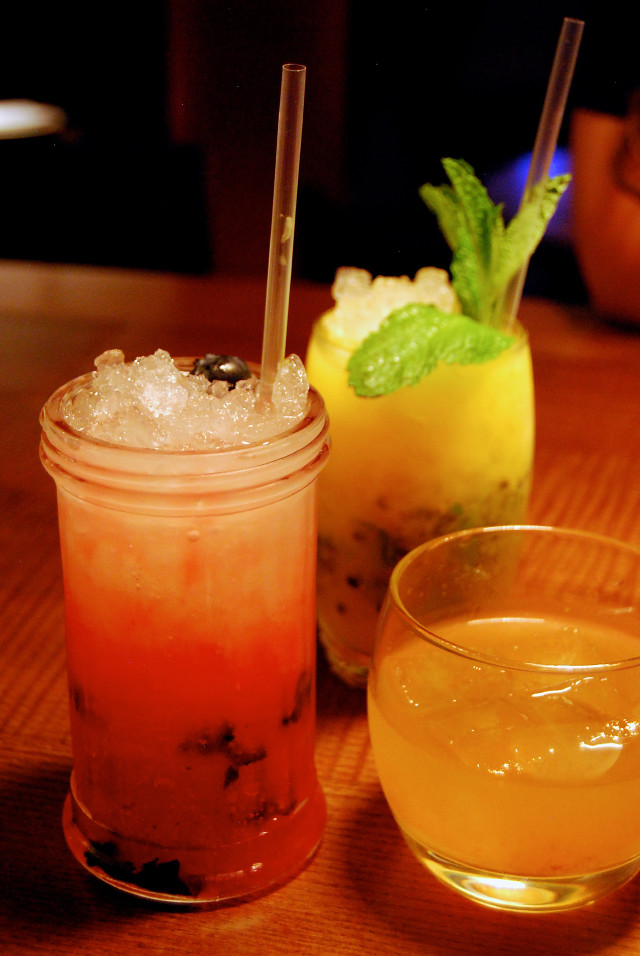 Shall we start with the drinks? We were both very, very impressed with Flesh & Buns’ offerings. We both went for the juices, which I think have to be my favourite part of the whole restaurant. They were as good as some of the best fruity cocktails, but something you can drink if you’re off the booze for some reason. I had the Sweet Symphony on the left (juiced lychees, fresh blueberries, raspberry syrup and fresh lemon) and Izy had the BD Fruity in the background (passion fruit, mint and orange juice). Flesh & Buns also has an extensive Sake menu, which I honestly could not resist. As I was in a fruity mood I went for Nanbu Bijin’s Sugarless Plum offering on the rocks, that was absolutely divine. You knew you were drinking plum sake, but it also very strongly spoke of sloe and damson gin; never a bad thing in my book! Very, very smooth, too. 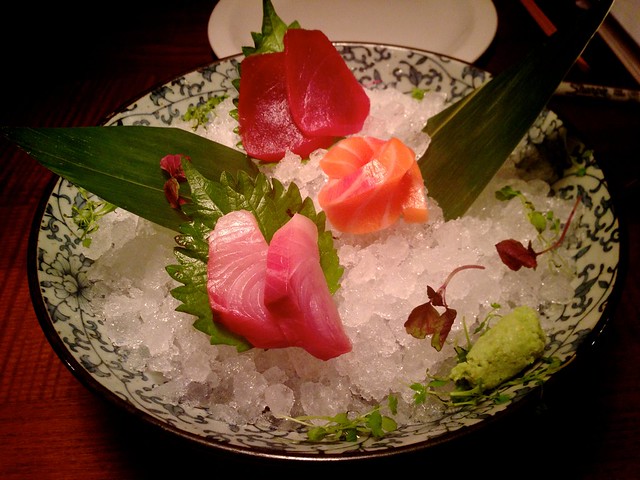 Food-wise we decided to start off with the mixed sashimi set, two pieces each of yellowfin, tuna, and salmon. This was honestly my favourite part of the meal; it was great quality, you got good sized pieces and the wasabi and soy on the side were the only accompaniments needed. I could have eaten an awful lot of this. 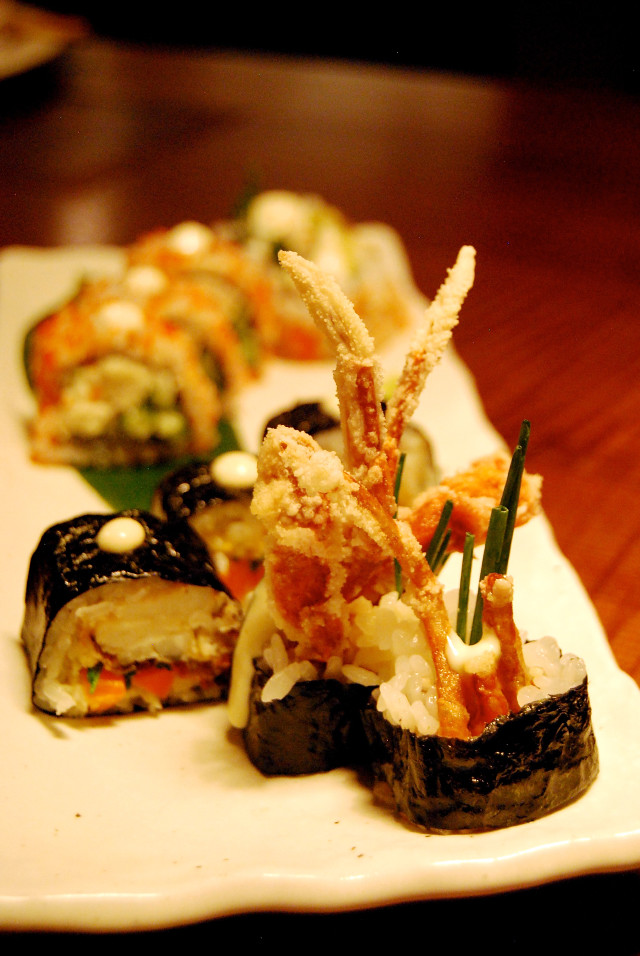 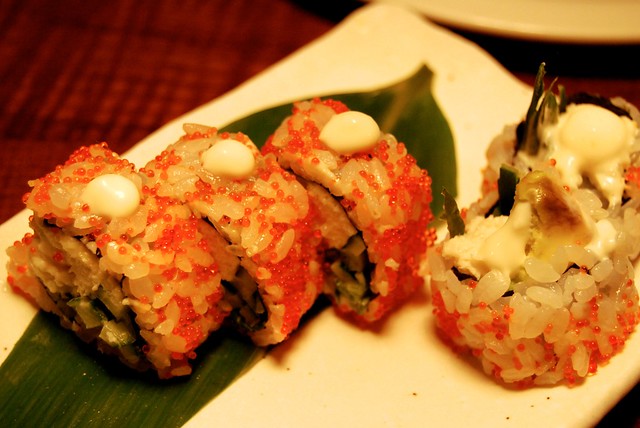 Next from the small plates part of the menu we went down a sushi route. There was nothing wrong with the Soft Shell Crab rolls, though I felt the crab was lost in the actual rolls, and you only got the delicious crunch and flavour from the bits that were sticking out the top. You would be much better off ordering the Soft Shell Crab by itself, served with the Jalapeño mayo that comes with the sushi rolls. We also went for the California Rolls that were lovely, topped with a simply divine mayo. While the mayos were lovely, I feel they overpowered the rolls a bit too much, so it was harder to tell that it was sushi that you were eating. Looking around at the other diners, I want to get in on the Ceviche and Korean Fried Wings action from this part of the menu, too. 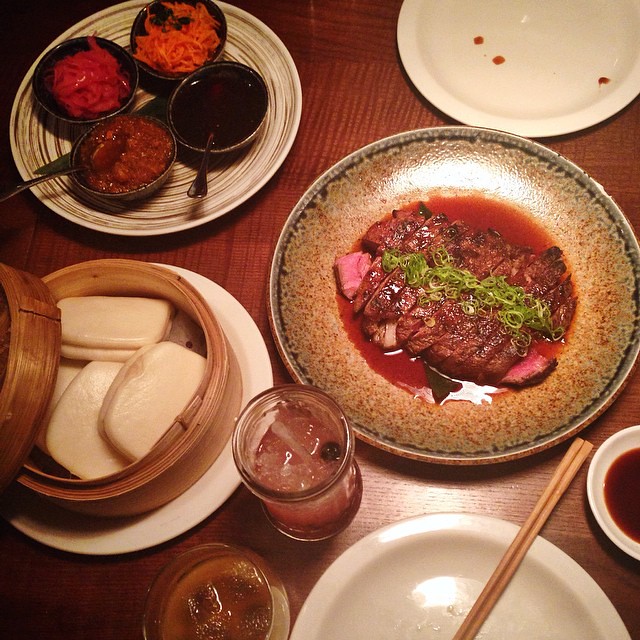 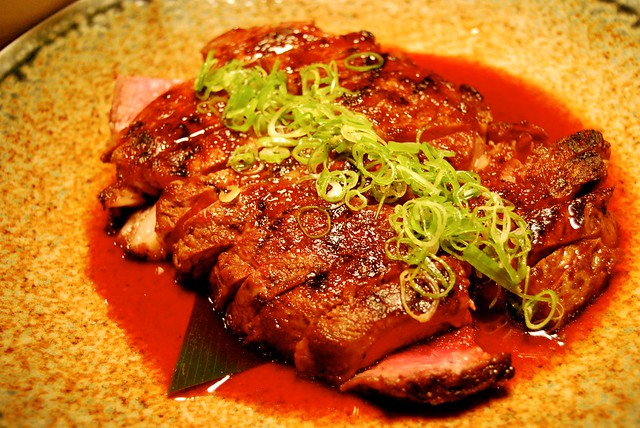 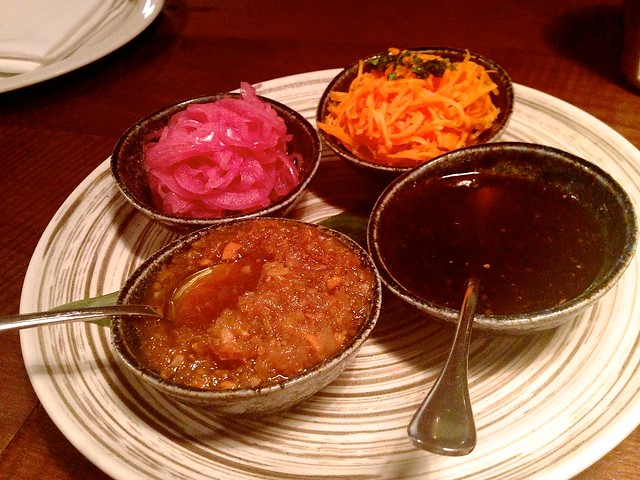 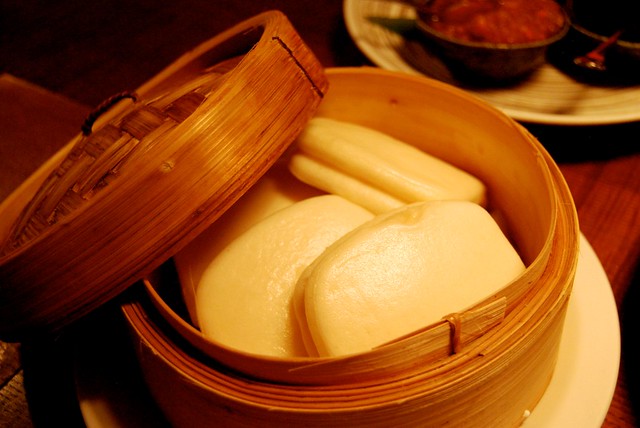 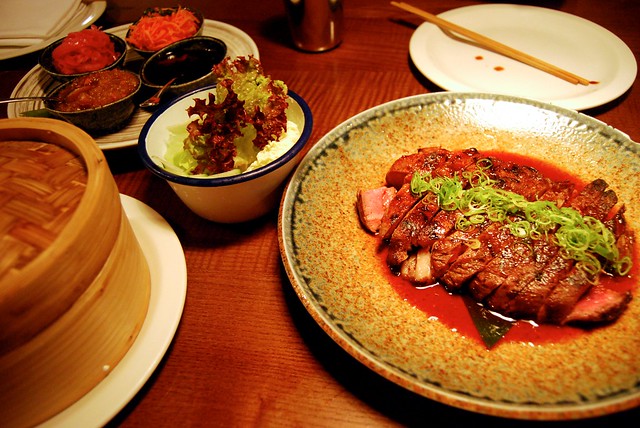 Next up, what the restaurant is actually named for: Flesh and Buns. We went for the Ribeye Steak, figuring that when it is cooked in sauces all the different steaks would taste the same, and it was the cheapest! We also went for the 2 recommended steamed buns per person, and the garnishes and pickles all came with the meat.

The buns were great (hard to get wrong), but I think it would have been good if they’d put a bit of greaseproof paper between them in the steamer to stop them sticking together, and therefore tearing when you tried to separate them. The meat was delicious, juicy and tender, but there was so much of it! Our server recommended a plate of meat each, though looking around at other tables we decided to share, which was the right thing to do. Even cramming them full, I’d think about 3 buns per person would be better as we were eating scrap steak after we’d run out of buns. This probably is not an issue with the Flat Iron or Wagyu steak (maybe also with the Sirloin?) but I also wish there were knives on the table as well as chopsticks, as some of the steak pieces with connective tissue in them were way too tough to chew, but there were still salvageable meat pieces on them. The condiments were all brilliant, especially the pickled onions. 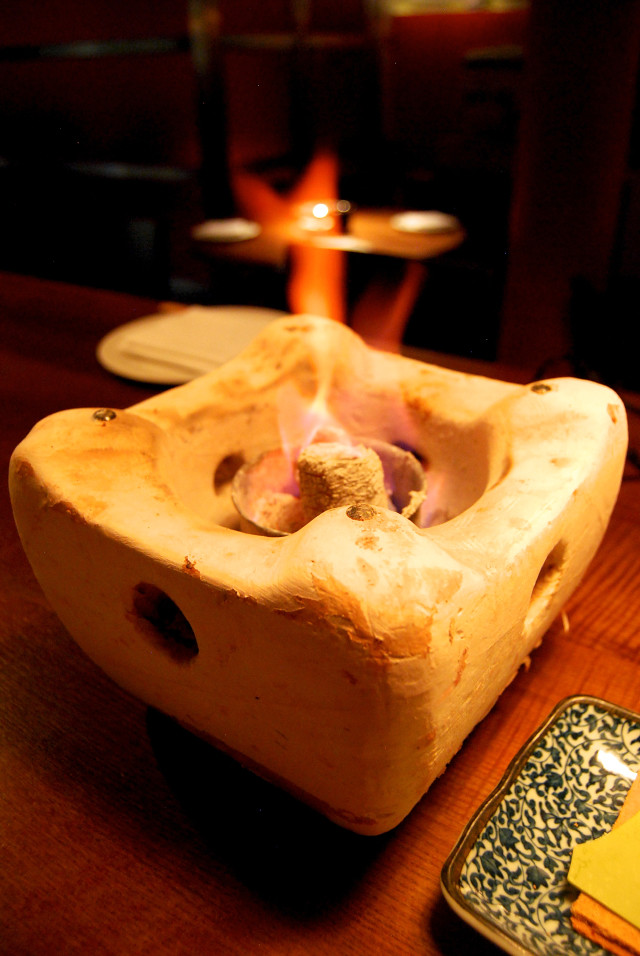 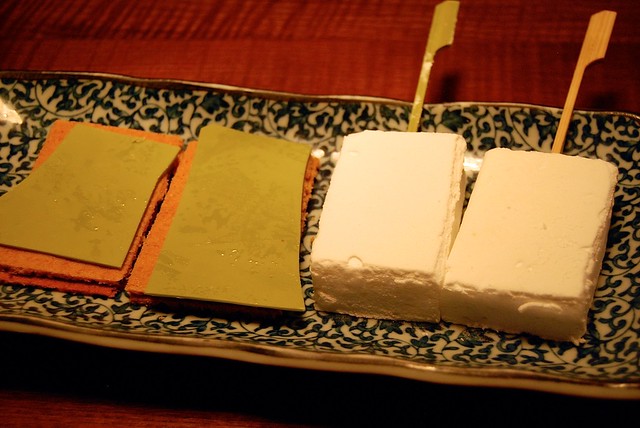 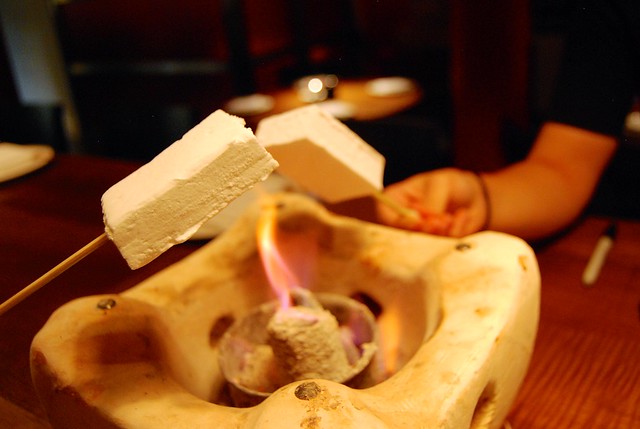 We barely glanced at the dessert menu; we both knew what we wanted to try. Everyone has told me that the table top, DIY S’mores with green tea white chocolate and very buttery homemade graham crackers are a must at Flesh & Buns, so that is exactly what we ordered. However, before I actually talk about what they tasted like, can we just take a moment to marvel at how artistic Izy’s marshmallow toasting skills are? 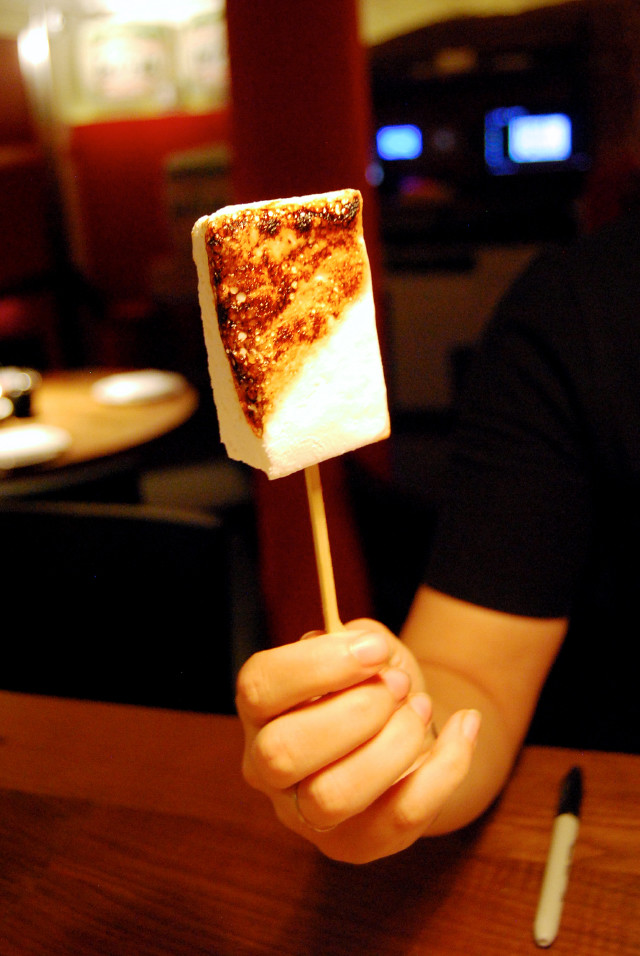 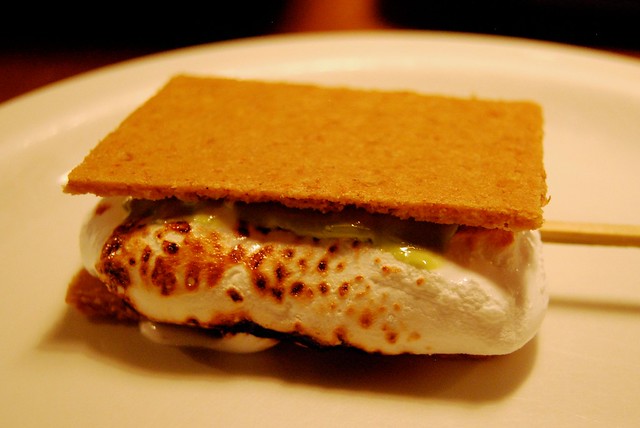 As for the S’mores itself, I think the dessert is more of a novelty factor than anything else. Okay, so it is not too expensive (£6, it works out £3 a S’more), but it was very, very messy to eat. I think the marshmallow was maybe too big? (And you’ll usually never hear me saying that about a marshmallow!) Also, while it was a nice novelty and in fitting with the style of the restaurant, we both felt that dark chocolate would have been better to cut through the sweetness; the white chocolate green tea slab was a bit too cloying.

So, would I recommend Flesh & Buns? While there is nothing at all wrong with them, I don’t think their two flagship dishes, the Flesh and Buns, or the tabletop S’mores are their best assets. I’d grab a few girlfriends and settle in for a long lunch ordering delicious juices and a selection of sake, before diving into the sashimi and a selection of sushi and small plates. Then I’d explore the dessert menu a bit more.

How many of you have been to Flesh & Buns since it first opened, and what did you think of it? I’ve pretty much read good reviews online, but I heard some mixed reviews when I said where I’d been for lunch at an event for JING Tea that evening. Also, do you have any mid-price sushi recommendations for me in the city? I really want to go to Sticks ‘N’ Sushi, but I’m rather worried about the bill I’d rack up! 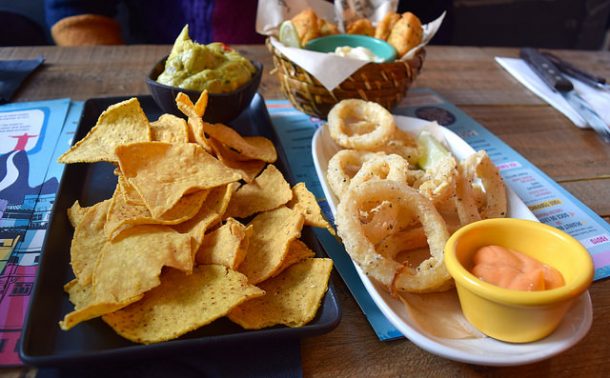 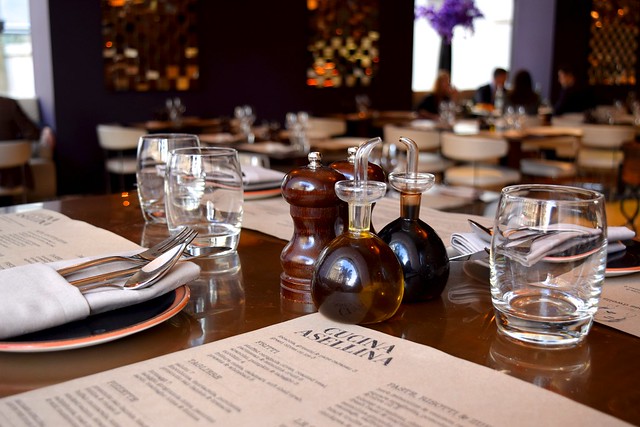 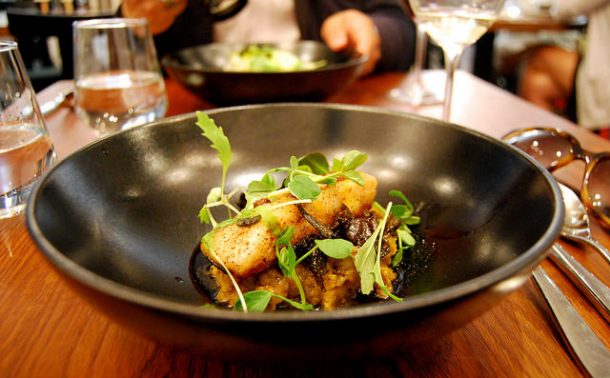