The most popular recipe of all time on my blog, and the recipe I get sent the most photos of are my Super Simple 3-Step Chocolate Brownies. I’ve gathered that they’re appeared at several Macmillan coffee mornings this year! What you probably don’t know is that since the original, I’ve been trying to improve on the recipe. One of my earliest trials was trying to pack fresh raspberries into them, which was a gooey (and not in a good way) failure. I did not forget the dream flavour pairing however, which sparked something in my brain when a big box of their new ganache chocolate bars landed on my doorstep from the guys at Lindt. 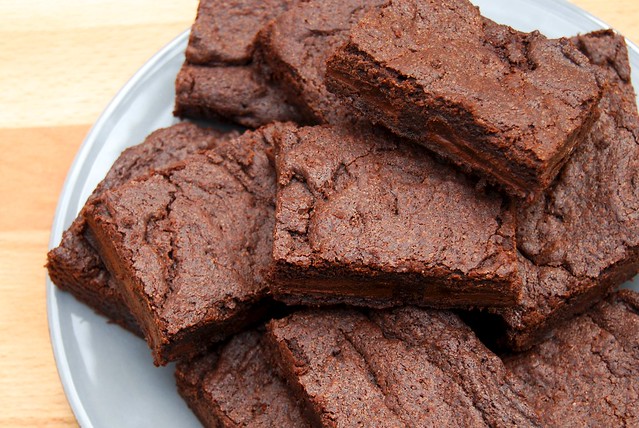 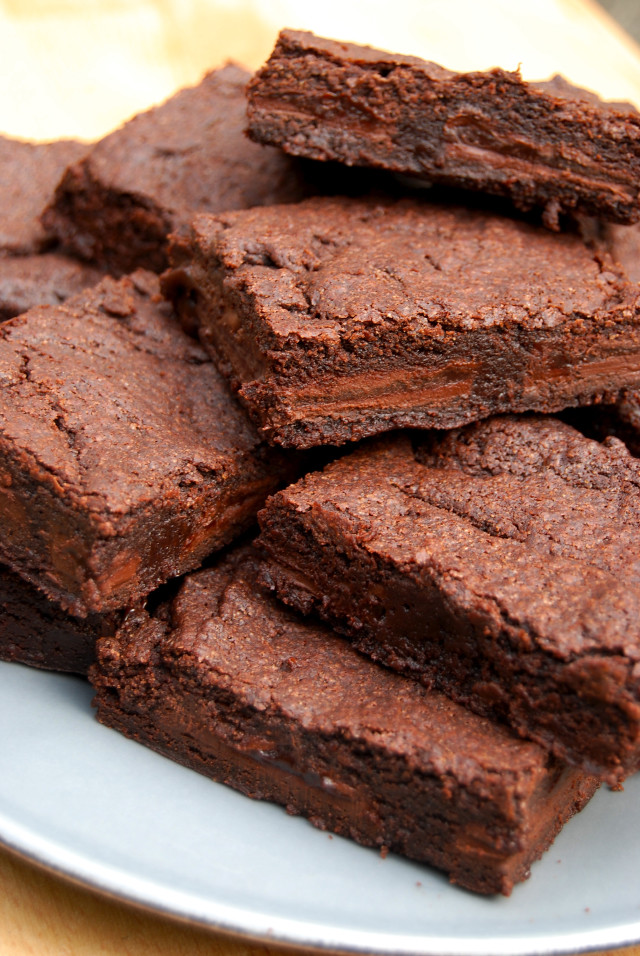 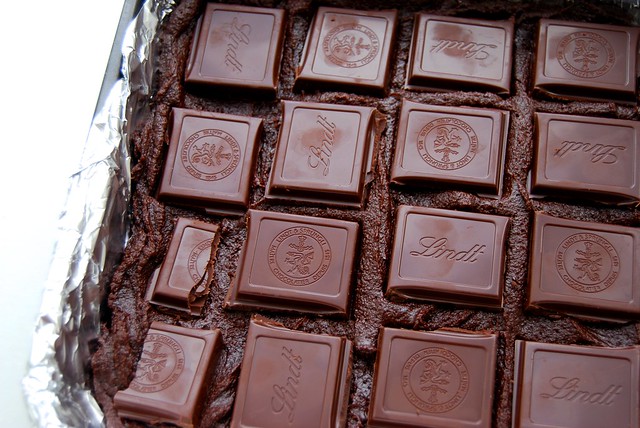 I used one and a half bars (about 200g) of the Lindt Creation Raspberry Dream chocolate, but it would really depend on the size of your brownie pan as you want all over even distribution how much you use. Buy two bars, and save any extra to nibble on while you’re waiting for the brownies to cool. Also, you don’t just have to make raspberry ganache brownies. Also part of their Creation range Lindt do a hazelnut, lemon bar and a (super yummy) pistachio version, and for those of you who live in countries where I’m not sure you can get the creations range yet, using classic Lint Lindor with its creamy filling will add that little bit extra to make your classic brownies super chocolaty. I have a personal favourite of their classic swiss chocolate with a milk filling, which I think will make a fantastic, non-biscuity Oreo type situation. The possibilities are endless! 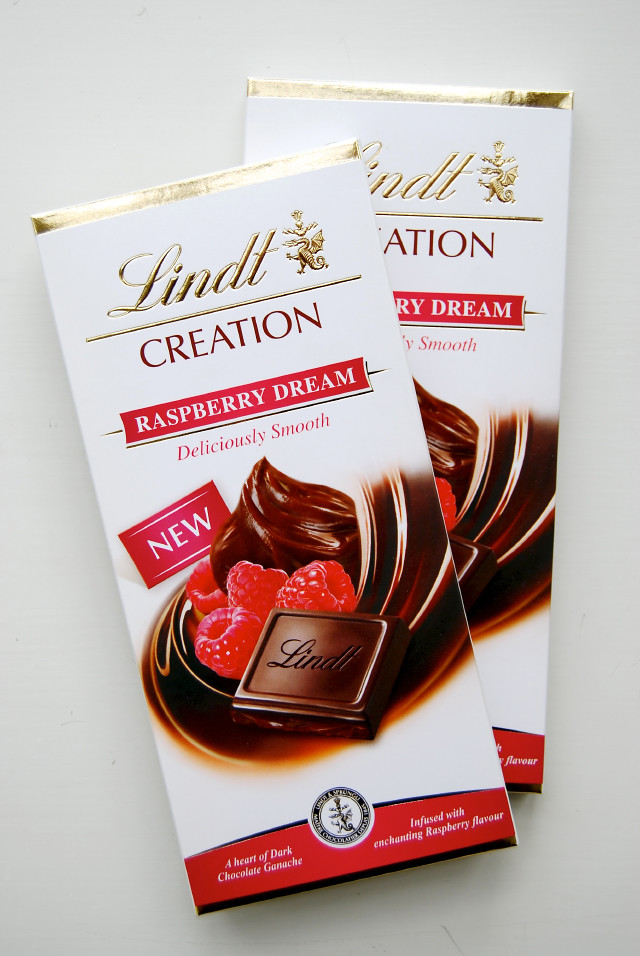 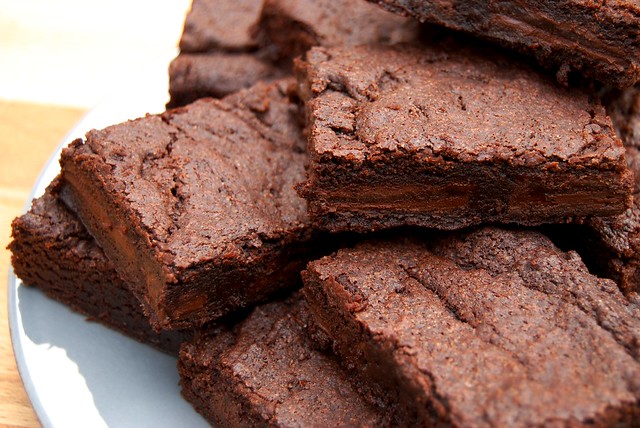 I’ve tried playing around with the method a bit every time I’ve made these to try and make them even more simpler, and in spite of an almost successful turn using the method Izy uses in her very fantastic (and very similar) Swedish Chocolate Cake in her book Top With Cinnamon, I’ve found that the Pyrex bowl over hot water method I originally employed in the kitchen I occupied before last, 5,000 miles away in California is still the best. Seriously, invest in this mixing bowl, use it for everything, and thank me later. However, I have reduced the amount of cocoa powder a little. I know lots of you were when baking as this recipe does use up a fair bit of it and it can get pricy, but I’ve found that anything less than 100g (3/4 cups) changes the flavour of the brownie. As for my preferred brands, ALWAYS Cadbury’s Bournville in the UK, and I do like Trader Joe’s Unsweetened Cocoa Powder if you live in the USA and have a TJ’s in your state.

Heat your oven to 160 degrees (325 Fahrenheit). Place the butter, sugar, salt and cocoa powder in a medium to large heatproof bowl. Place the bowl over a saucepan of hot water, simmering but not boiling so the bottom of the bowl is not sitting in water. Gradually stir every few minutes until the butter has melted and everything is combined. The mixture should be smooth, but slightly gritty. Set aside, off the water to cool. Be sure to let it cool completely, because if you add the eggs when the mixture is still warm they will probably cook. You’ll still get brownies, but honestly not very good ones. I’ve screwed this up before, so you don’t have to!

Meanwhile, line a 8 inch square tin with foil or good quality baking parchment while the mixture cools a little. Alternatively  you can buy a disposable foil brownie tray. Beat in the vanilla extract with a balloon whisk followed by the eggs one at a time until the mixture is smooth. Beat in the flour until the mixture is smooth and slightly glossy. Pour half of the mixture into the tin, and then eavenly distribute the chocolate pieces so you get one in each slice. Pour the rest of the mix over the top, carefully making sure it is well distributed and all the chocolate is covered. Bake on the bottom half of the oven for 20 minutes. Allow to cool and remove the foil and slice the brownies into 18 squares once completely cool.

I’d love to hear what you think of this, 2.0 version of my super easy brownie, and also if you have any requests for upcoming recipe posts. Also, stay tuned next month for yet another brownie recipe for me which is something totally different from this paired down version (but still super easy) coming up in my Borough Market column. 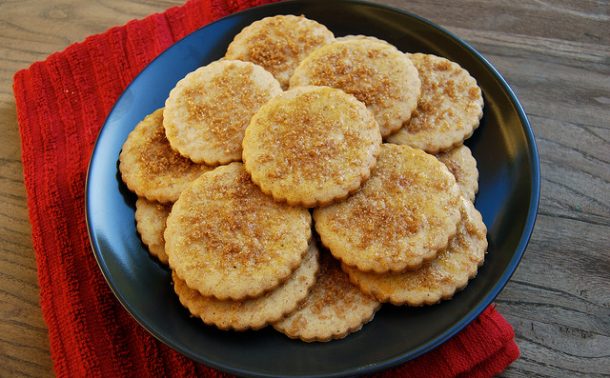 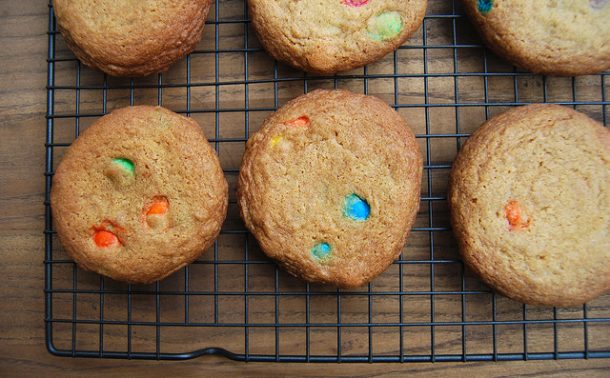