After a mad morning at work reviewing the local papers last week I dashed off just before lunch to Canterbury in order to sit down with a couple of other local journalists to try Dev Biswal’s exciting new Autumn tasting menu at The Ambrette (my favourite place to go for modern Indian in East Kent), which is geared towards using ingredients that don’t only taste delicious, but are designed to boost your immune system to stave off the cold and flu as we move into the final few, slightly colder and wetter months of the year. As I mentioned when I reviewed the Summer tasting menu back in August, something I have loved every time I’ve eaten at The Ambrette, both as press and as a general customer is that before whatever you’ve ordered comes to the table you get a little nibble or two of whatever the chef happens to have made that day by way of an amuse bouche. Last week we had two, a fantastic confit of duck croquette (at the top of this post) served with a light chutney, curried sauce and one of the crispest popadoms I’ve ever had. Next we were treated to little jars full of chunks of raw salmon, cured meat, cheese and tomatoes, which were sealed in with smoke which leant everything, especially the salmon a wonderfully complex flavour and fragrance. To kick off the tasting menu, we started off with a fantastically light Sweet Potato Dumpling, sitting on a bright chutney and served with a curious, smoothie-like shot of Pomegranate, Mango and Ginger extract. I know it seems like hippie rubbish, but I do believe in that blast of energy you get from drinking something like a smoothie packed with raw greens. This little first course provided that boost, and as well as tasting delicious and bright (what you want when it is cold and pouring with rain outside) left us ready for the next course. Also, on the health front, did you know that a serving of sweet potato provides more than seven times more Vitamin A you need each day? They don’t just taste and look great, then! Before we moved onto the actual food, what excited us when our next course arrived at the table was the beautiful bright green stripe that was painted across the plate. On asking our server, we discovered that they had mixed natural food dye with a little melted butter to add yet more brightness to all of the gloomy October-November-December days we’re now going to have to face. Just wait until you see what they’ve done with the same on our plates for the next course!

So, this was the Brochette of Pheasant in a sauce of Fresh Coriander with Chutneys and a Permisson and Mango Salad. The pheasant was moist and married perfectly with the sauce, though while permissions are packed with great vitamins, I was not all together convinced with my first time trying the fruit. Was it just me, or do you find that they make the inside of your mouth feel a little wooly? I think one of my favourite courses, both visually and in flavour terms was the Sea Bass with a Mung Lentil Kedgeree served with Fresh Tumeric Roots and Stir Fried Kale. It was supposed to be red mullet, but the fish delivery had not arrived so we had what was fresh. The curried sauce under the fish was delicious, but I think my two favourite parts of the dish were the slightly pickled and deliciously bright carrot settled on top of the fish, and the kale. Now, I’m a bit of a kale obsessive (keeping in with the theme of this menu, did you know that a cup of chopped kale contains 10% of your daily calcium requirement, 24% of your daily folate requirement, 134% of the vitamin A and vitamin C you need, and 500% of the vitamin K you need each day?), but I have not had kale this good in a while, lightly charred and dressed in a bright, zingy lemon dressing. I’m already a professed fan of the soup course at The Ambrette, and this Tomato, Beetroot and Black Pepper number was no exception. A nice little break between courses, the tomatoes provided sweetness, the beetroot a lovely earthy aftertaste (while also providing a good deal of vitamin B-6, as well as iron and magnesium), and the pepper a little bit of spice. Something so simple, but perfectly pitched. For the final savoury course, we had Poussin Breast flavoured with Cumin, served with Masala Potatoes, Marrow and a sauce of Cinnamon and Nutmeg. Usually I have poussin as a whole bird, so it was interesting to get the delicate meat of the breast solo. Surprisingly, it was not lost among all of the strong Indian flavours. Cinnamon is great for your blood sugar, which is why I sometimes use it in smoothies, not just for flavour. For the grand finale, I think we were all more interested about snapping photos when it arrived at the table before we got a chance to actually focus on what we were being served. All of that beautiful wispy (fresh mint) scented smoke was created by the bigger plate below being filled with fresh mint leaves and dry ice, which bubbled up beautifully when hot water was added. This is a lunch time menu, so if you don’t have plans around lunch on Halloween, this is my spooky recommendation!

The actual dessert was divine. Kentish pears were lightly poached (they still had a nice bit of bite to them) and served in a delicious mango sauce. On top, a mouthwatering scoop of Cranberry and Bee Pollen Ice Cream, finished with a generous spoonful of balsamic and chocolate pearls. I was particularly enamoured by the balsamic pearls, you don’t think that a sharp yet impossibly creamy cranberry scoop needs it, but the added sourness really brought out all of the flavours.

The Autumn tasting menu at The Ambrette is available every lunchtime Monday to Saturday in all of their restaurants (as well as Canterbury, they also have locations in Margate and Rye) until December 31st. It costs £32 per person, which I think is bloody good value for what you’re getting. Be sure to call ahead to book, though, as you need to let them know that you’ll be ordering the tasting menu in advance. 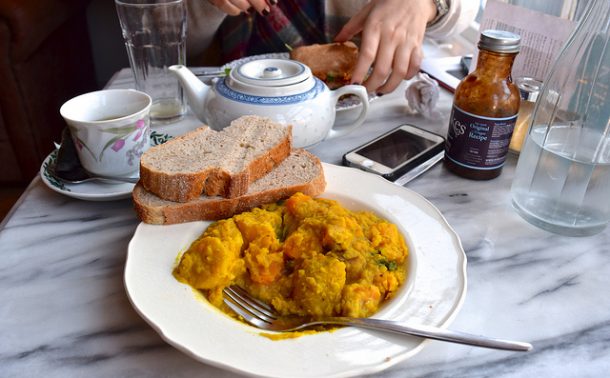 Canterbury Places To Eat In Canterbury: The Shakespeare