I’ve had one of those meals again where sometimes I did not even know what I was eating, except that everything had been produced with so much imagination and attention to detail that I’ll not only be raving about the restaurant, but individual plates for ages. Bala Baya opened within walking distance of my flat a few weeks before I moved back to the city, and it has everything I look for in a restaurant: small plates, Israeli cuisine and killer cocktails. I’ve been trying to eat there for a while (getting stuck in the lock down on during the attack on Parliament put paid to my first reservation), but it was more than worth the wait. Joined by Yaya and Lloyd, we settled into a few cocktails before ordering almost the whole menu. I started with the ‘Peach’: a delicious and refreshing spritz-style cocktail made with peach liquor, Kamm and Sons (which seems to be one of the mixers of the summer for 2017 judging by the amount of cocktails I’ve had it in recently) and lemon, topped up with prosecco. Whatever you do, order this one. The boys had (which I later ordered) the ‘Pink’: a refreshing and very pretty blend of rum, watermelon and parsley gazoz (Turkish soda). The complimentary bread that was brought to the table came in the form of warm pitta enriched with olive oil with a tart dip of yogurt, harissa, sumac and flat leaf parsley. If I was not trying to pace myself (I told you we practically ordered everything) I would have utterly demolished this. One to re-create at home for guests the next time I’m putting together a Middle Eastern spread. Or, you know, just for lunch. First up came the braised ox served over chickpeas and warm hummus, served with more warm pitta for scooping. This was rich, sweet and punchy, and really set the theme for the meal as the whole ‘not quite sure what all the flavours are but they’re all bloody amazing together so lets keep eating’! Next, the Yemeni Ceviche, made with the catch of the day, green chilli, sweet potato, prickly pear and a cardamon and coriander salsa. Well, raw fish and cardamom are always things that make me happy so this was obviously going to be one of my favourites, but the bright, fresh, punchy flavours just blew me away – and how pretty does the dish look? Every bite was different by way of flavour profile as you gathered it up on the fork, and I like the idea that while you’ll get a similar dish whenever you order this but a little different every time. The next two fish dishes were also excellent. Still faultless but probably the least impressive of the bunch (which by no means should diminish how great it was) was the cured spiced salmon with rhubarb, preserved lemon and dill jellies – one of their more delicate dishes. On the other hand the spiced squid with sweetcorn mayo and grape relish really packed a bunch with bright, punchy flavours and a gentle little bit of heat. It was impossibly tender, too. One to give people who insist they don’t like squid, and you know they are wrong. These are the kebab dumplings, stuffed with lamb and doused in yogurt, spiced oil, sumac, spring onions and what is in my view the garnish of the kings, toasted pine nuts. These were light, flavourful and were not overpowering – the dish was balanced in such a way that you clearly got the clean, bright flavours of everything with each bite. You get three, so if there are two of you be sure to fight for the last one! My two favourite dishes (I think, that ceviche and a couple of our desserts may also deserve that crown) came next. I’m not a cauliflower person. Yes, I have been converted when it has been riced and some pomegranate seeds, olive oil and fresh coriander have been mixed into it, but big lumps? Not a chance, unless they’re served up at Bala Baya it seems. The menu just lists ‘crumble, syrup and yogurt’ as the constituent parts, but aside from looking very pretty? The flavour utterly blew me away. The light, creamy cauliflower was the perfect foil for the slightly umami coating, and I wish I’d been able to snag more than a couple of pieces!

‘Crispy, Sticky, Crunchy’ is the dish I have raved about whenever someone has asked how the meal went. It is officially up there with the raw langostines with oyster leaf and sea lettuce at Bao in Fitzrovia as one of my favourite plates of food in London now. Chicken is served with bitter orange, harissa, butternut squash and kimchee, and it really is the perfect mix of textures. Fun and curious to eat it had that mouthwatering quality you just can’t place, but just feel as you’re eating a truly great plate of food. If there is more than two or three of you dining order up more than one serving of this. Our final sharing dish was an impossibly tender plate of pigs cheeks braised in plum, served with soft herbs, a sharon fruit salsa and a good dousing of quality olive oil. You know when meat is so rich and tender you can just cut it with a spoon? That. The bright garnishes really cut through the pork – this is meat heaven. We also ordered an Israeli salad on the side, crowned with a pile of snowy white feta. When I was researching Israeli salads for the Israeli Mixed Bean Salad in Student Eats I discovered that an Israeli salads vary wherever you eat them. Bala Baya’s has dressed cucumber, tomatoes, red and white onions, fresh mint, olive oil and sumac. The feta crumbles delightfully into it as you spoon it onto your plates. Something nice and fresh by way of a cleanser between dishes, while still standing out in its own right. Time for more cocktails before dessert. I loved the apricot liquor heavy ‘Apricot’ in the short glass (is it just me that finds Bala Baya’s cocktail names utterly charming?), and the ‘Tart’: vodka, grapefruit and thyme gazoz was super refreshing while remaining just that little bit curious. However, it was the colour of the ‘Refresh’ that really got me excited (as well as it’s un-placeable flavour) made with gin, and grape and ginger gazoz. The desserts tasted as pretty as they looked. This is the burnt babka, topped with a pistachio and sesame spread and served with a whisky anglaise and stewed plums. Now, these, again, are not things I’m usually into. I typically find pastries like babka not as exciting as I should, and I’m not a whiskey drinker. But this dessert was stupendous, so I can only imagine now much you’d be into it if they are the sort of things you like! My favourite dessert was the Malabi, a coconut and Malibu set milk with a cherry compote, pistachios and rosewater. I want to eat this for breakfast every morning and preferably have access to it at all times. The rosewater was strong but not overdone. So many places never put enough compote on top of their creams but the balance in this one was just right. I’m as excited about this in the dessert category as I am about the chicken and kimchee number. Actually, scratch that; This is now my favourite dessert in London. Finally, we shared ‘The Filthy’: mascarpone, tahini, tonka cream, milk caramel, sesame crumble and banana compote, finished with a shock of passion fruit. Basically, a Middle Eastern banoffee pie, but worlds better. Forget the sickly dessert of school dining rooms, this was fresh, bright and stupidly addictive. I want Bala Baya to come out with a cookbook so I can have the recipe.

As you can probably tell from my gushing review, Bala Baya absolutely blew me away. Also, as I can walk there and they offer that chicken and kimchee in a pitta by way of a grab-and-go lunch, and their brunch offering looks frankly nuts with unlimited small plates with a main dish, so I’ll see you again soon guys! 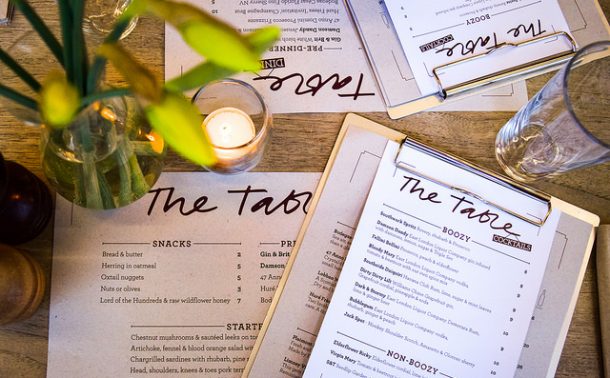 Eating Out Places To Eat In London: Table Cafe, Southwark