My first dinner out of 2019 was Rovi, Yotam Ottolenghi’s latest opening in Fitzrovia. I’ve had salads, cakes and snacks from Ottolenghi deli’s before, but believe it or not I’d never actually eaten in one of his restaurants before, so I was understandably excited! We had a great evening, but I was disappointed that the dishes turned out to be a bit hit and miss. We had some incredible bites, but some of the others were not necessarily all that. 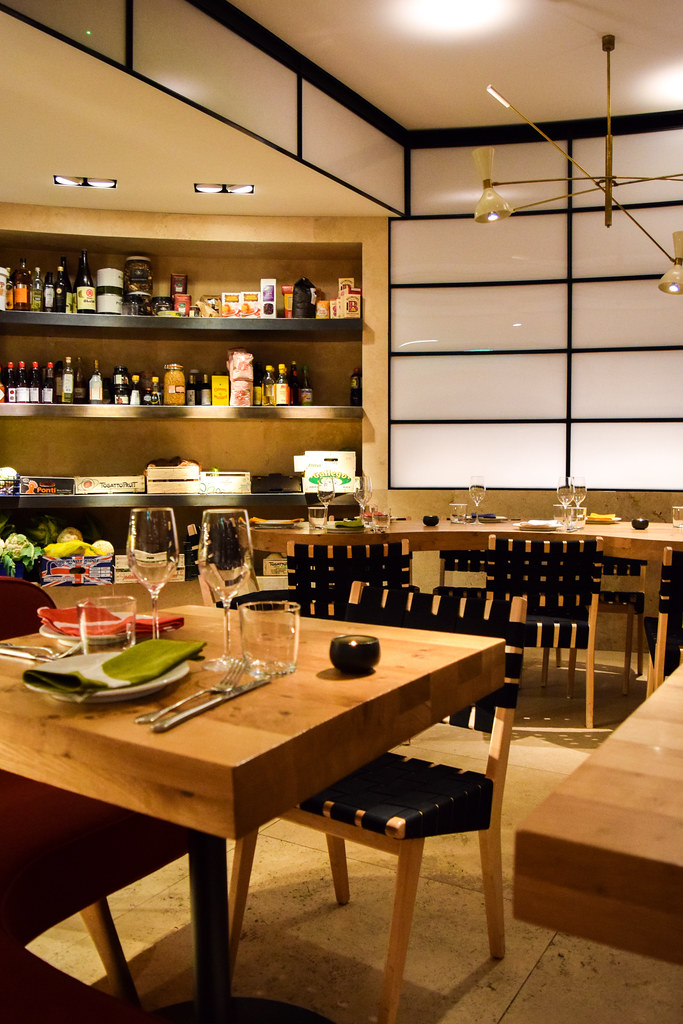 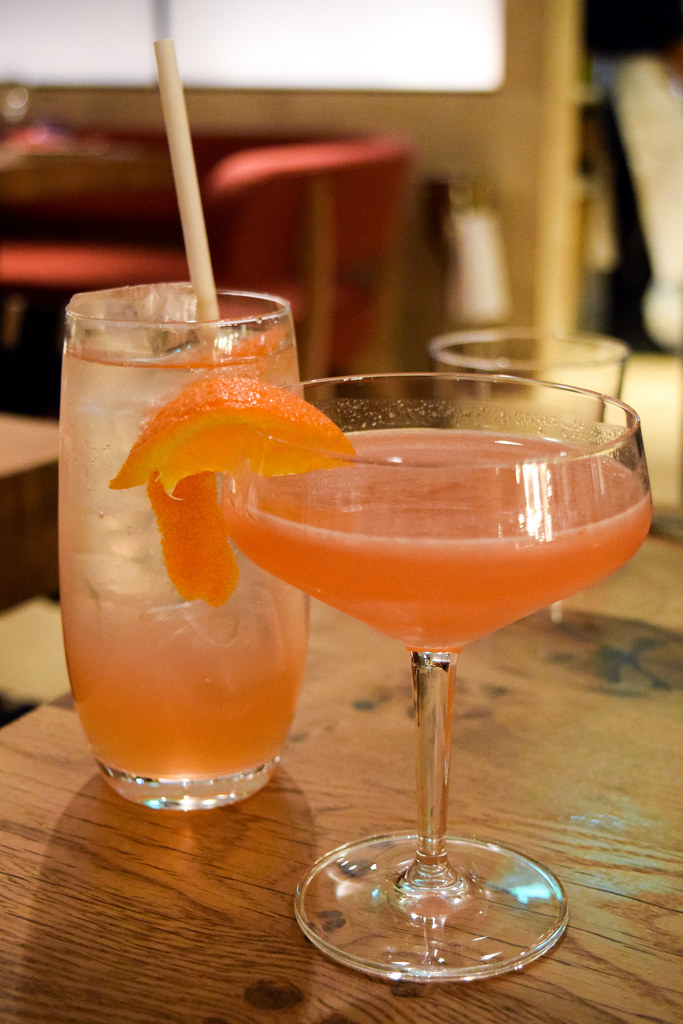 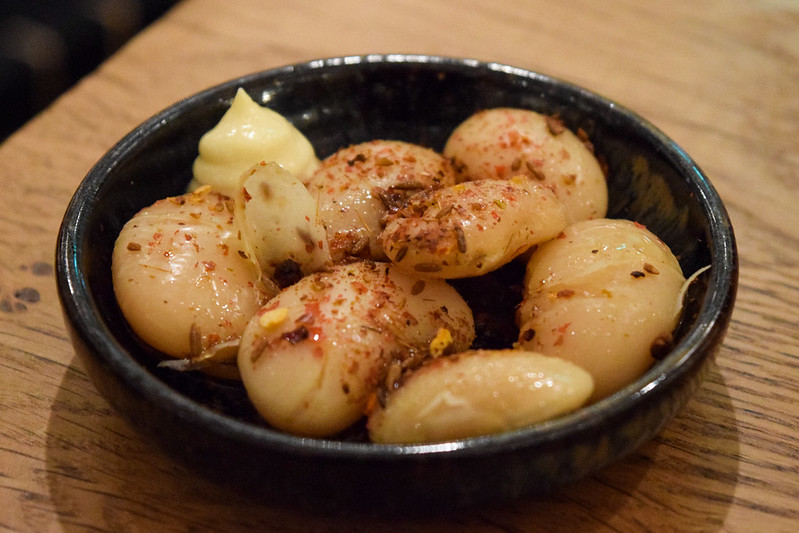 We started with two killer cocktails – a ‘Lucky Dip’, orange infused Ketel One vodka, elderflower and a citrusy, seasonal fruit shrub, and my ‘Tutti Fruity’, which was a simply flawless blend of Arette Blanco tequila, mezcal, agave, and citrus juice, which was the seasonal fruit of the day. They came with a complimentary little dish of butter beans dressed with chilli and cumin, served with aioli, but to be honest I did not think it was all that. The beans had not taken on much flavour, and the spiced oil stopped you being able to properly dip or scoop the aioli.

One of the best bites of the entire meal came off the drinks nibbles section of the menu: parsnip croquettes served with copious amounts of pecorino, smoked garlic aioli and pickled walnuts. They were rich, melty and perfectly seasoned; each bite was perfect, and they had that barely tangible quality to them that you can only detect in the very best dishes. I wish the whole meal had been like this, then I would have been raving. 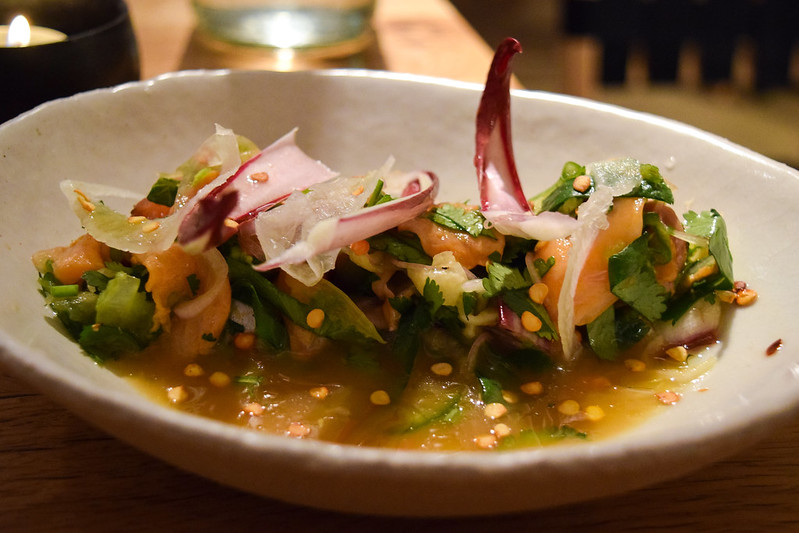 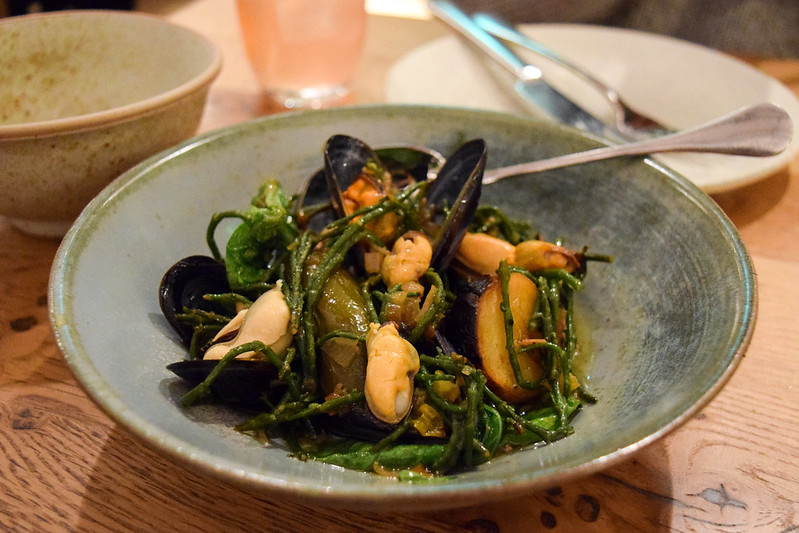 Bizarrely, as they appeared further down the menu than the veggie dishes, our fish dishes arrived. Our trout ceviche served with grapefruit and fennel which was that days special was everything you want in a plateful – bright, fresh, zingy and insanely full of beautiful, punchy flavours. The mussels, served with cascabel oil, hay smoked pink fir potatoes and samphire in contrast was a bit of an odd dish. The flavours of each individual component were great, but they just seemed jumbled on the plate together, not really complimenting each other. And I think there was too much cascabel oil in there, as it was a little too much making the dish a little too greasy. 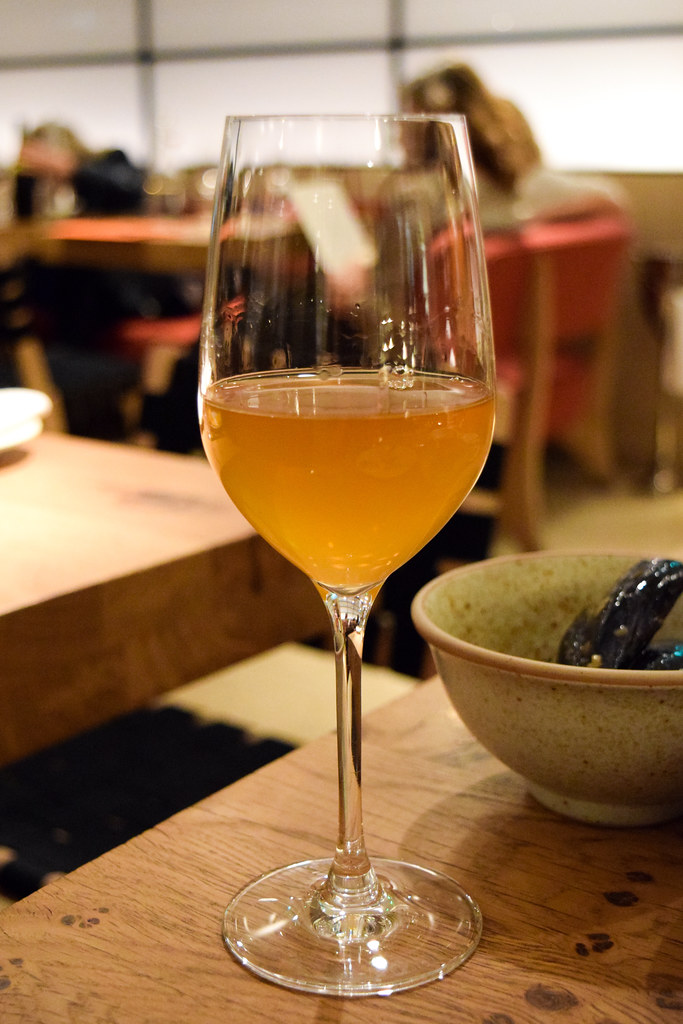 Off the back of our fantastic cocktails I ordered a glass of wine. Interesting wines always take my fancy, and usually if there are orange wines on the menu I get them as they are something I simply don’t drink at home. I had a glass of the Rkatsiteli Bodbiskhevi, or ‘Pheasant’s Tears’ from Georgia, but I really wish I had not. For £10 a glass, it had a beautiful nose on it, but was otherwise rather flavourless. If you’re going for wine, stick to European reds and whites to be safe, as there is nothing more disappointing than bad wine at restaurant prices. 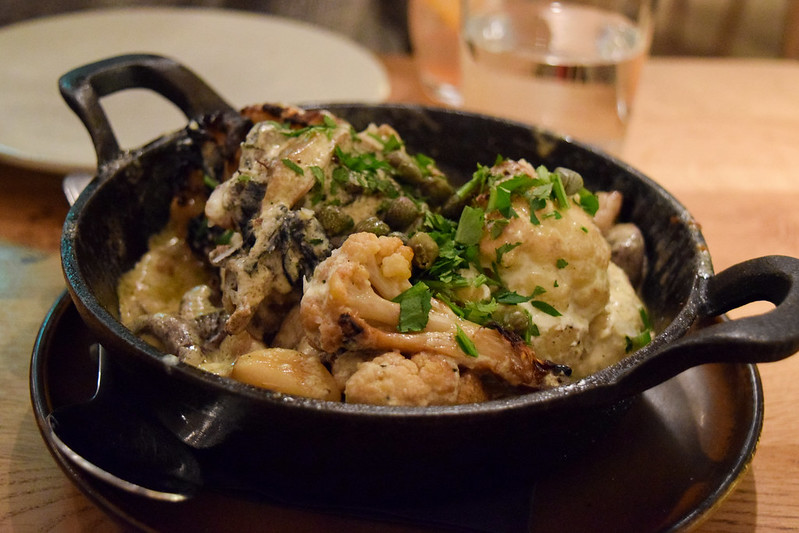 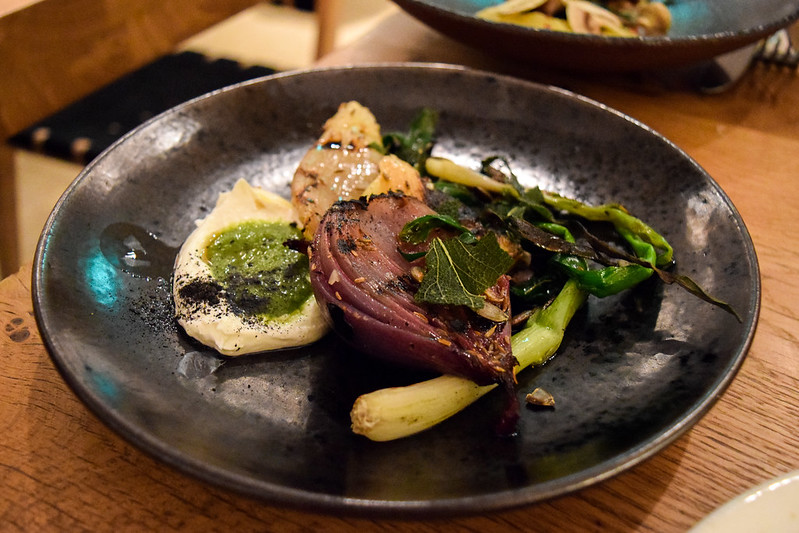 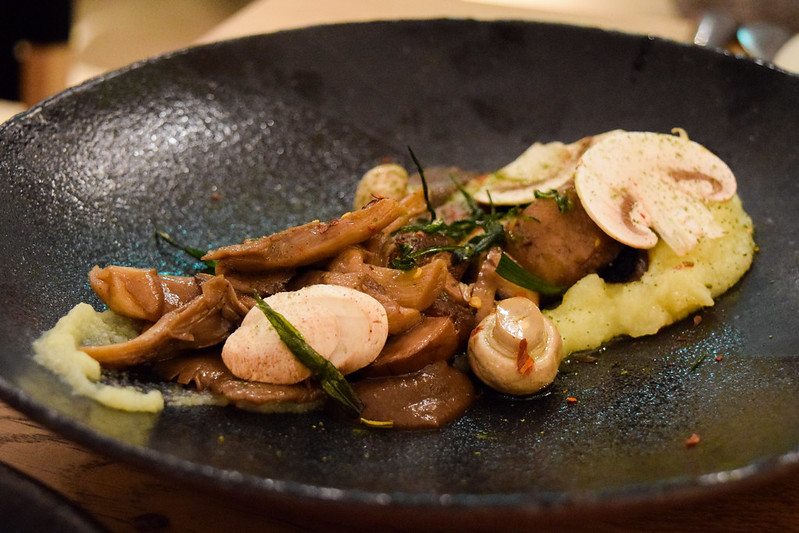 Next came our vegetable plates; we ordered the advised amount but they were way bigger than our (otherwise fantastic) server described to us so we did not finish everything you see here! These three dishes were our biggest disappointments. The cauliflower served with buttermilk, chestnuts, mushrooms and capers was delicious, but very rich and creamy; the portion was huge, way too much for two people to share, so only get this if you’re sitting on a big table – a couple of bites is more than enough to still enjoy the dish and for it to not feel like something to work through, which was a real shame as it really was tasty!

Our charred onions served with whipped feta and green gazpacho. The feta wads delicious but I felt that the gazpacho could have packed a bit more of a punch, and which onion you were eating really told how great the dish was; the spring onion was good, the red onion and shallot were so-so, but the charred leek was simply incredible.

The fermented mushrooms with chilli, polenta and black vinegar was also a curious one. The mushroom were also a mixed bag, all tasty but it was really the button mushrooms (and there were only two) who were the star of the show, reminiscent of those pickled mushrooms I had at Lupin’s in Borough a couple of years ago and did not shut up about for months. The less said about the polenta the better – it was a bit flavourless, with a still gritty texture. 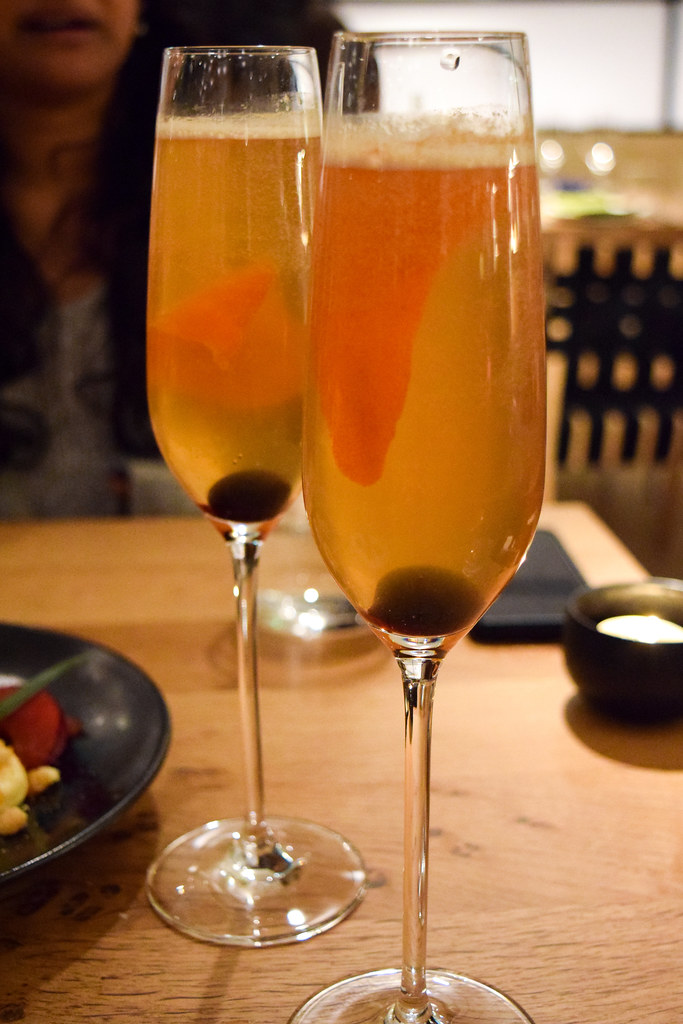 After the disaster with the wine, we reverted to cocktails and found another winner; the meal took a distinct upswing from here! The Before & After is a sort of grown up Champagne cocktail, made with Courvoisier, Belsazar rosè, orange and champagne – the perfect thing to finish off our meal with a dessert and sweet to share. 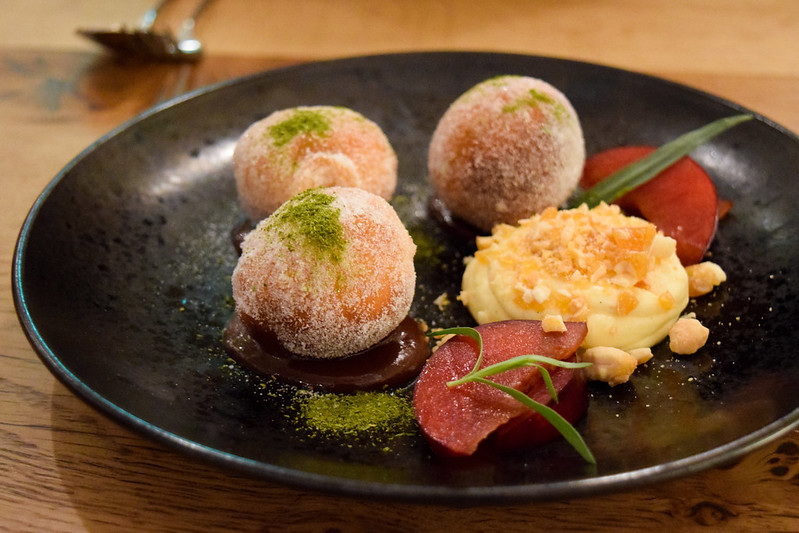 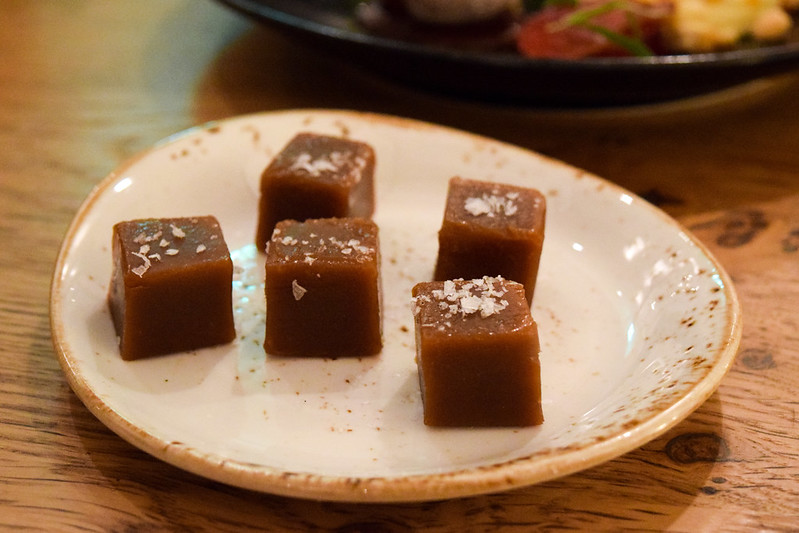 For dessert we had the doughnuts served with an incredible juniper plum jam, candied almond shards, tarragon dust and cream – a really fantastic, unique dish. Miso fudge with vanilla salt was also a beautiful way to finish off the meal – I had way too much, and at £4 you get a good amount. Something I’d love to play around with re-creating at home.

Our meal at Rovi was mixed – we had some high points, like the cocktails, croquettes, ceviche and desserts, but with our bill coming in at around £140 for the two of us, it was a real disappointment. Based on their cocktails and sweets I would not rule Rovi out as a brunch spot you should try, but for a sharing plates supper in London with good service, great drinks and a slick environment, I’d book at table at temper, La Goccia, Chicama, Yosma or even Duck & Waffle instead. 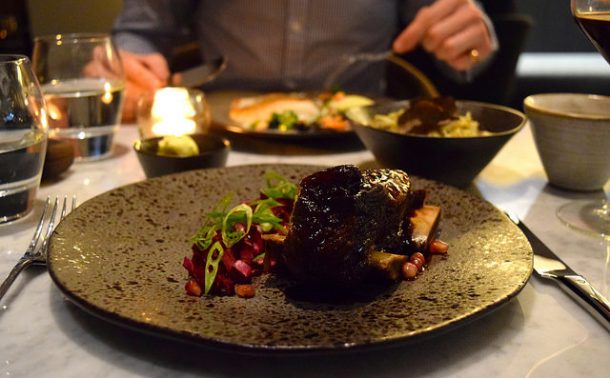 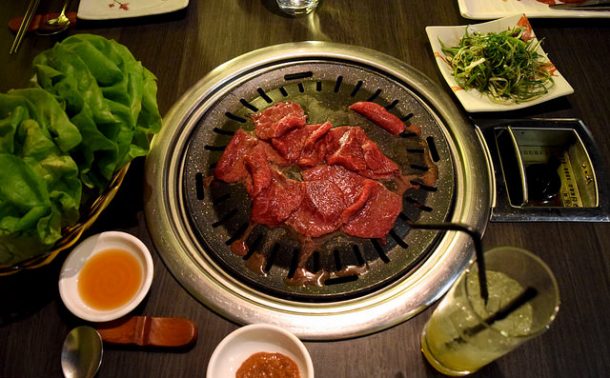