Places To Eat In London: The River Cafe, Hammersmith 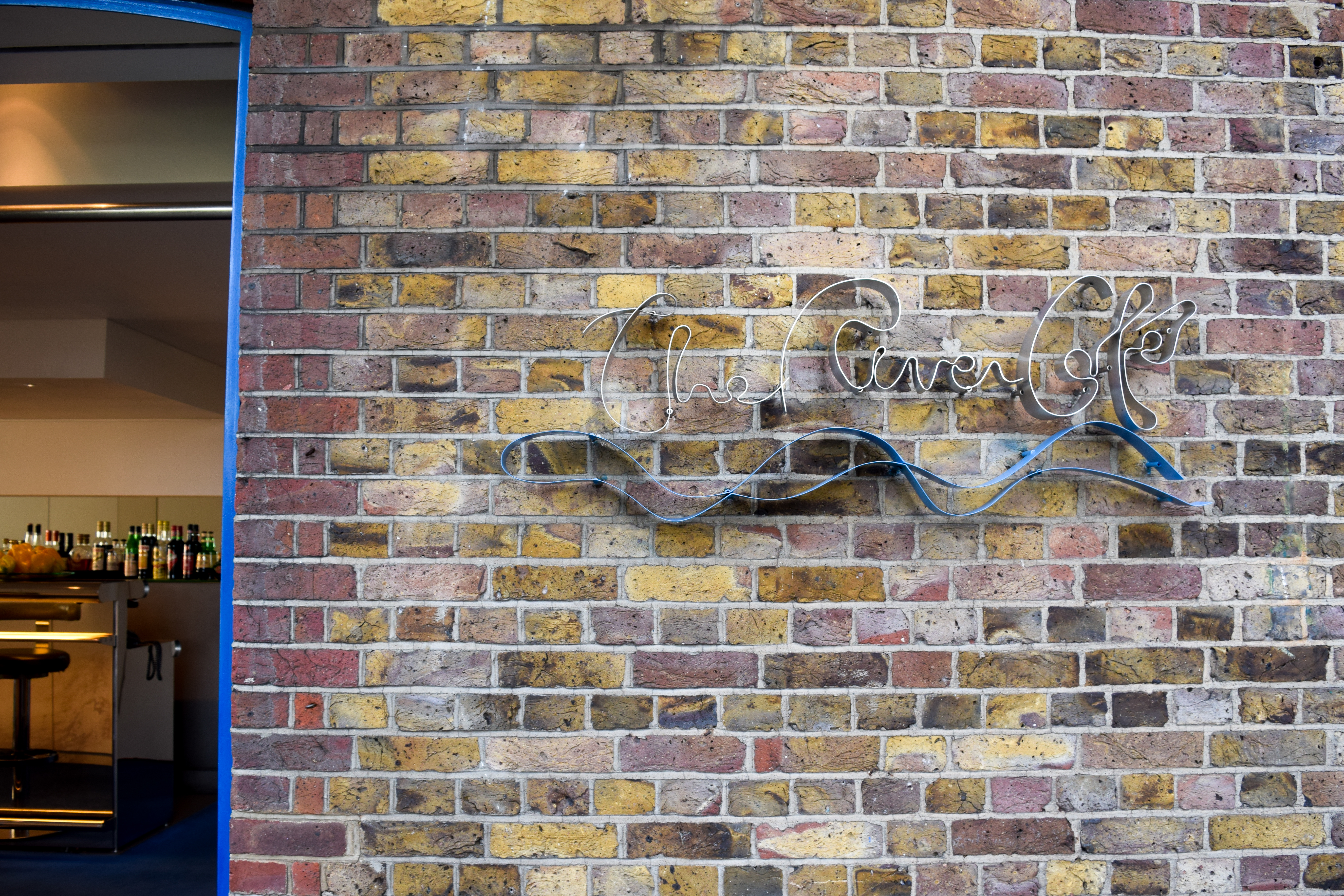 There is always a fear when you’re visiting a bucket list restaurant that it will disappoint. While I can’t know for sure, I’m pretty sure that The River Cafe in Hammersmith, widely recognised as one of the worlds best restaurants – somewhere people travel specifically to London to eat at – was one of the first entries on my mammoth list of places I want to eat at in the city which I first started when I first arrived here, living in student halls in the September of 2011. My want to eat at The River Cafe came from a time that pre-dated my arrival in the city; it came from a time where the tube still scared me and I found the big city impossibly overwhelming. 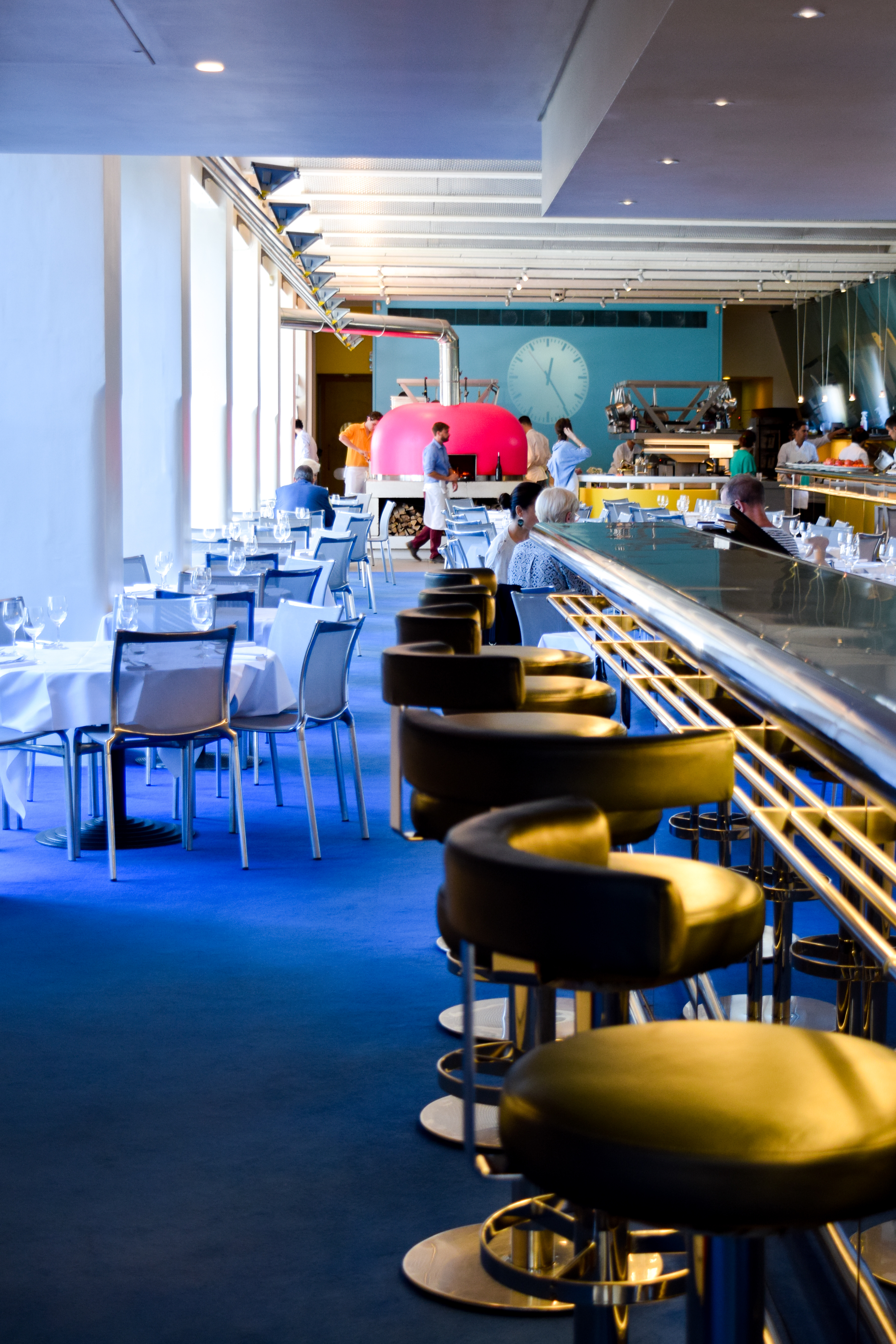 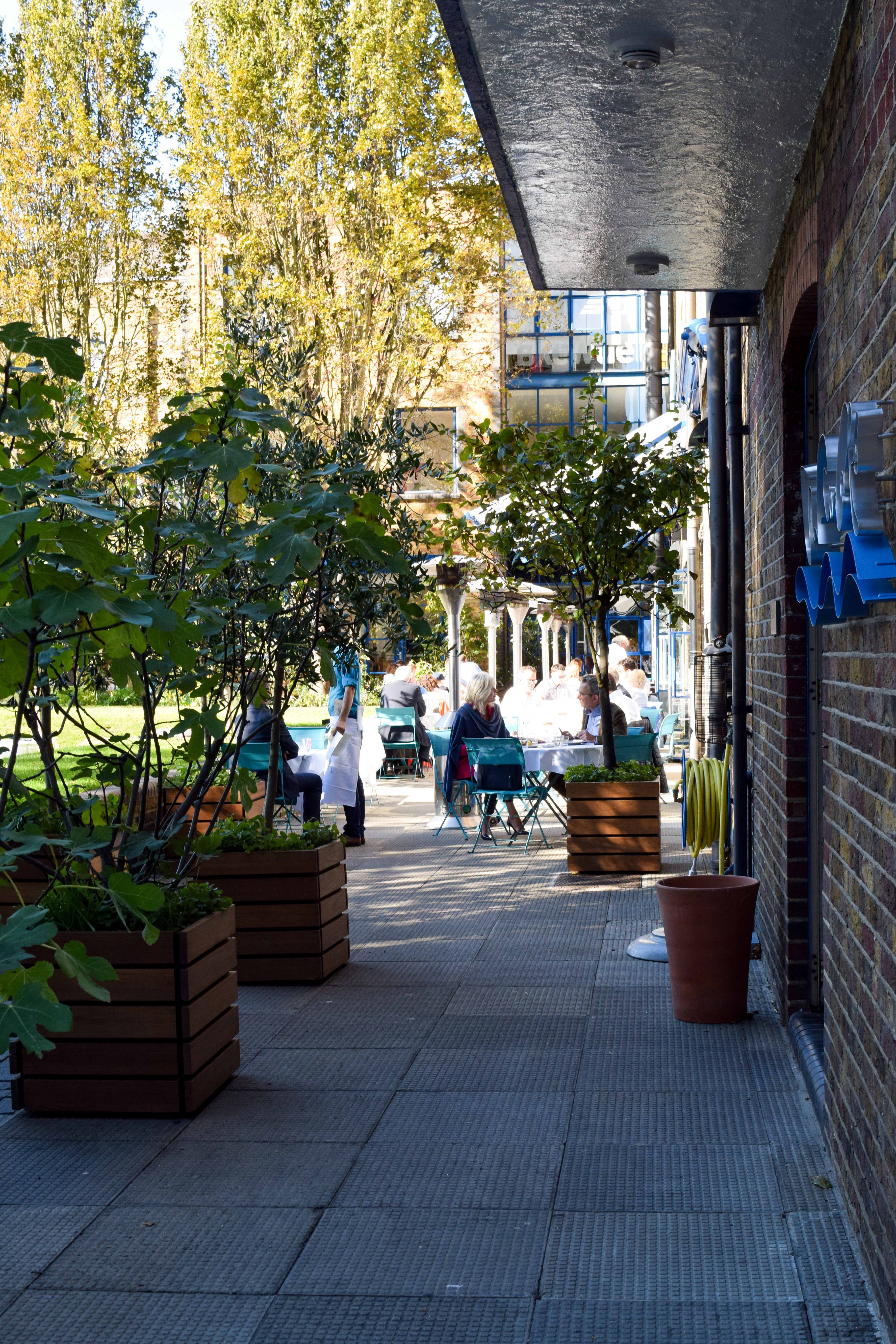 First I knew about The River Cafe the way they (I think unfairly) are known to most people; this is the kitchen where Jamie Oliver was first discovered as a young, fresh faced, pre-naked chef cook, and we all know how that turned out. Later, I knew The River Cafe and their focus on simply cooked, perfect local British and quality Italian ingredients from the River Cafe cookbooks – I’ll never cook osso bucco bianco any other way, it is just too perfect a recipe to adulterate with additions, tweaks or other kitchen experiments. 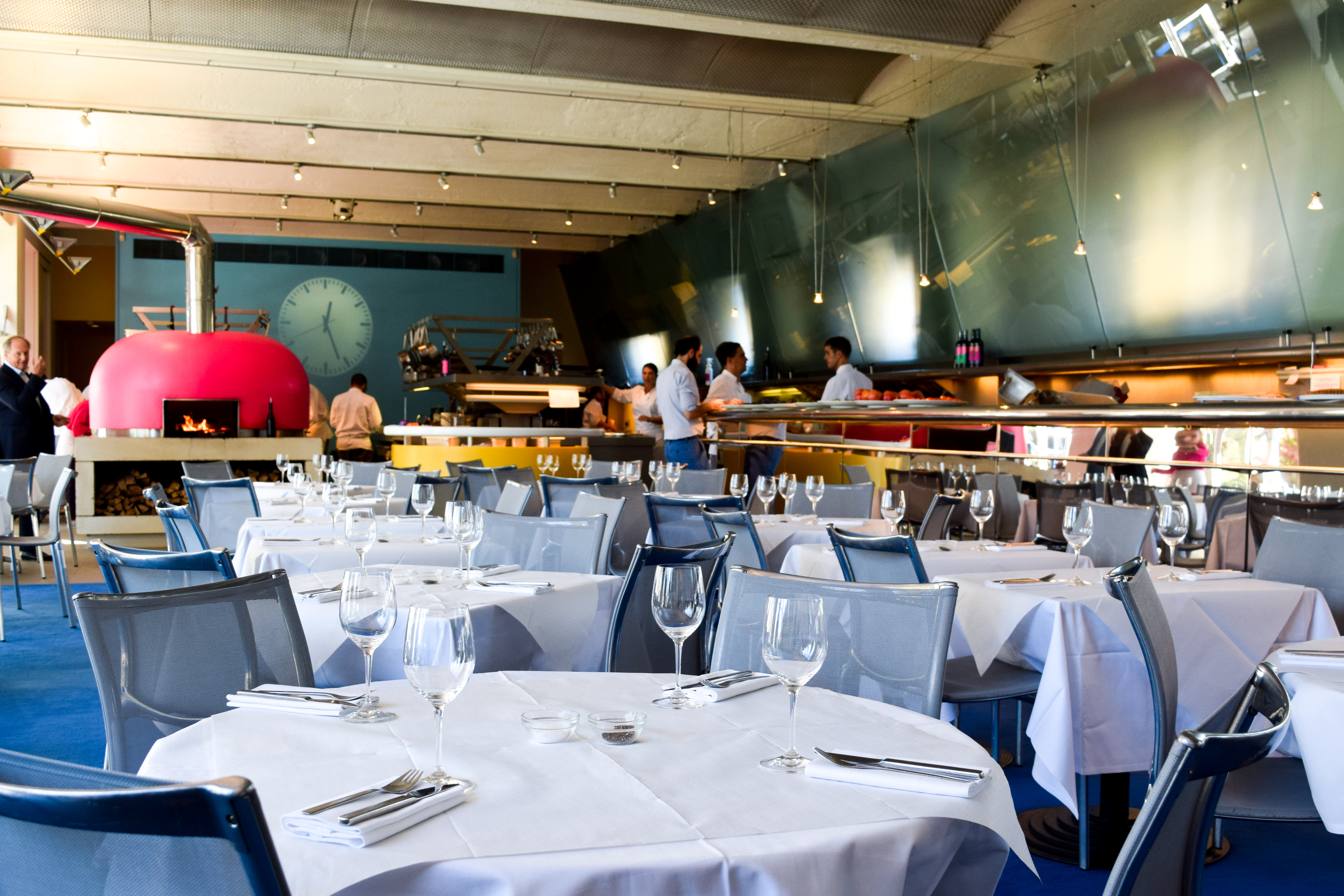 So why has it taken me over seven years to visit the bright, modern, Thames-side dining room? Well, the price for one thing. A critic recently called a meal at The River Cafe ‘reassuringly expensive’ and he was not kidding – a quite big lunch with drinks and wine for the two of us came in at £230 (though we did not regret or begrudge a single penny), but then again, when I think a meal will really be worth it I’ve not shied away from a massive bill at the end before. In reality, I’ve just been too lazy. I regularly look at potential additions to ‘the list’, but decide not to add them because they’ll be too awkward to get to. You’ll need to pay for an Uber/ cab to get to The River Cafe or dust off your walking shoes. However, it also just so happens to be 20 minutes walk from my front door. I’d run out of excuses, so we booked a table for late September. 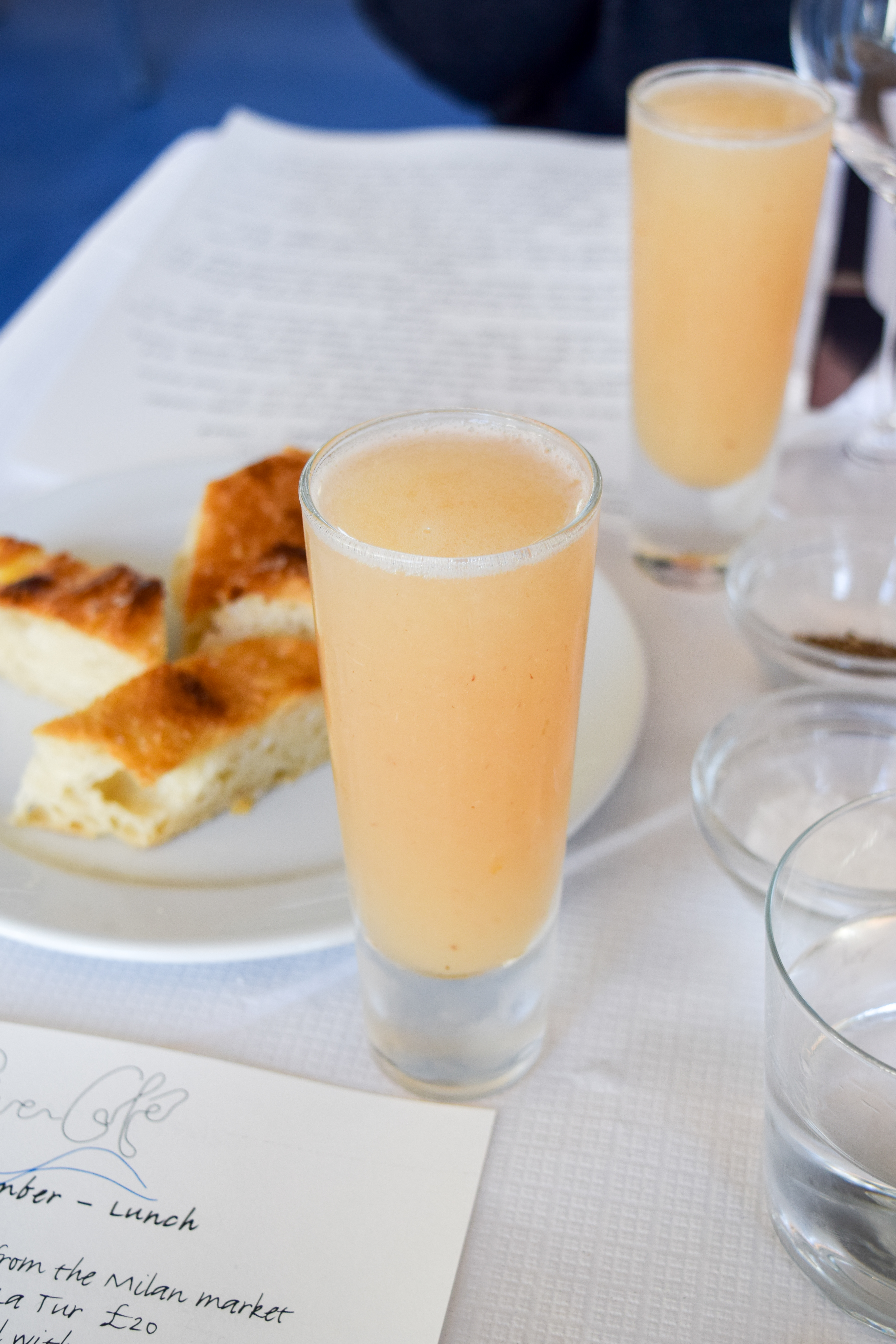 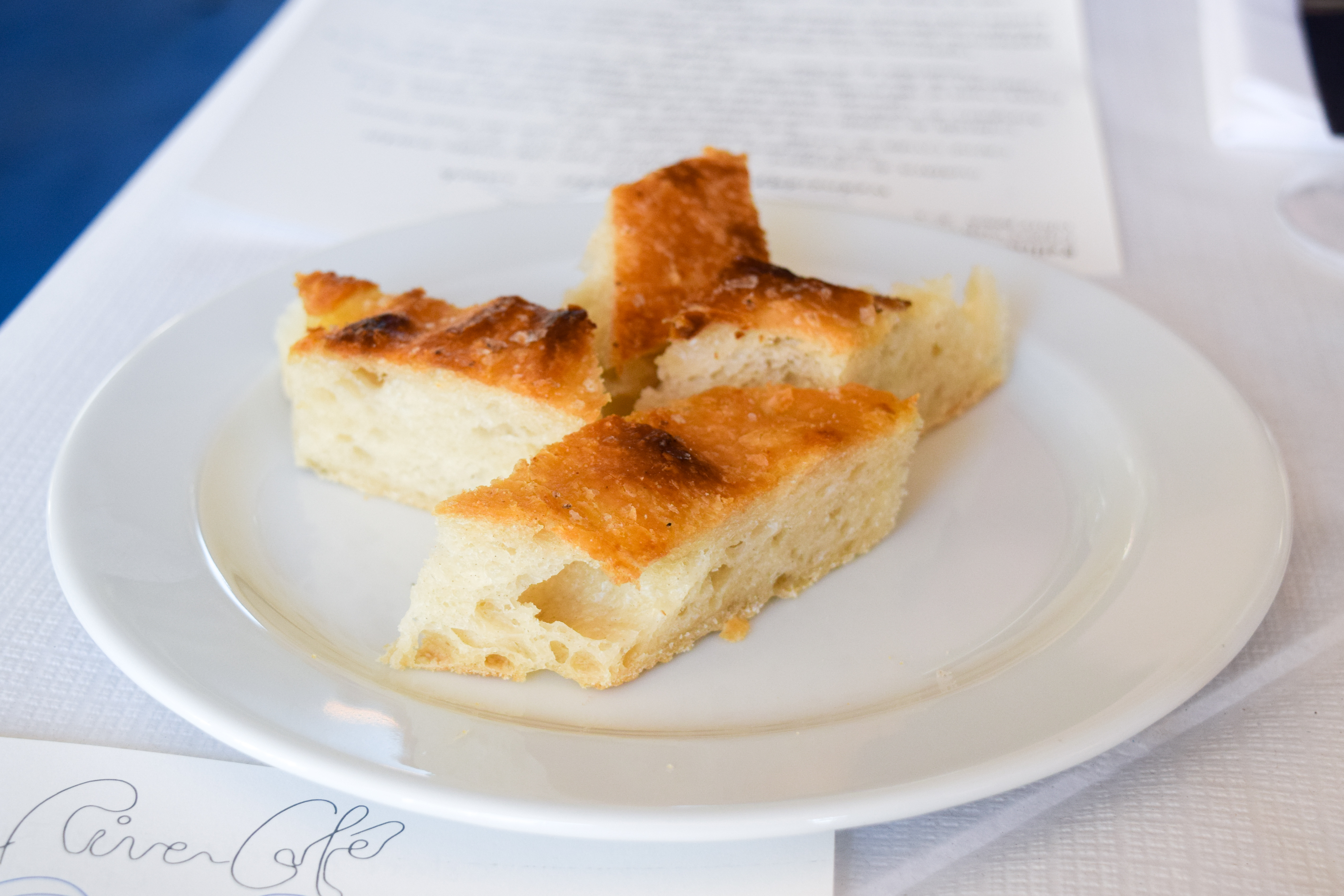 While we browsed the menu (yes I’m that annoying person who researches what they might eat online before pitching up for a meal, but the menu here changes daily) we had some house focaccia and a wonderfully fruity and cold, classically served white peach bellini. For a true Italian meal, start with this. 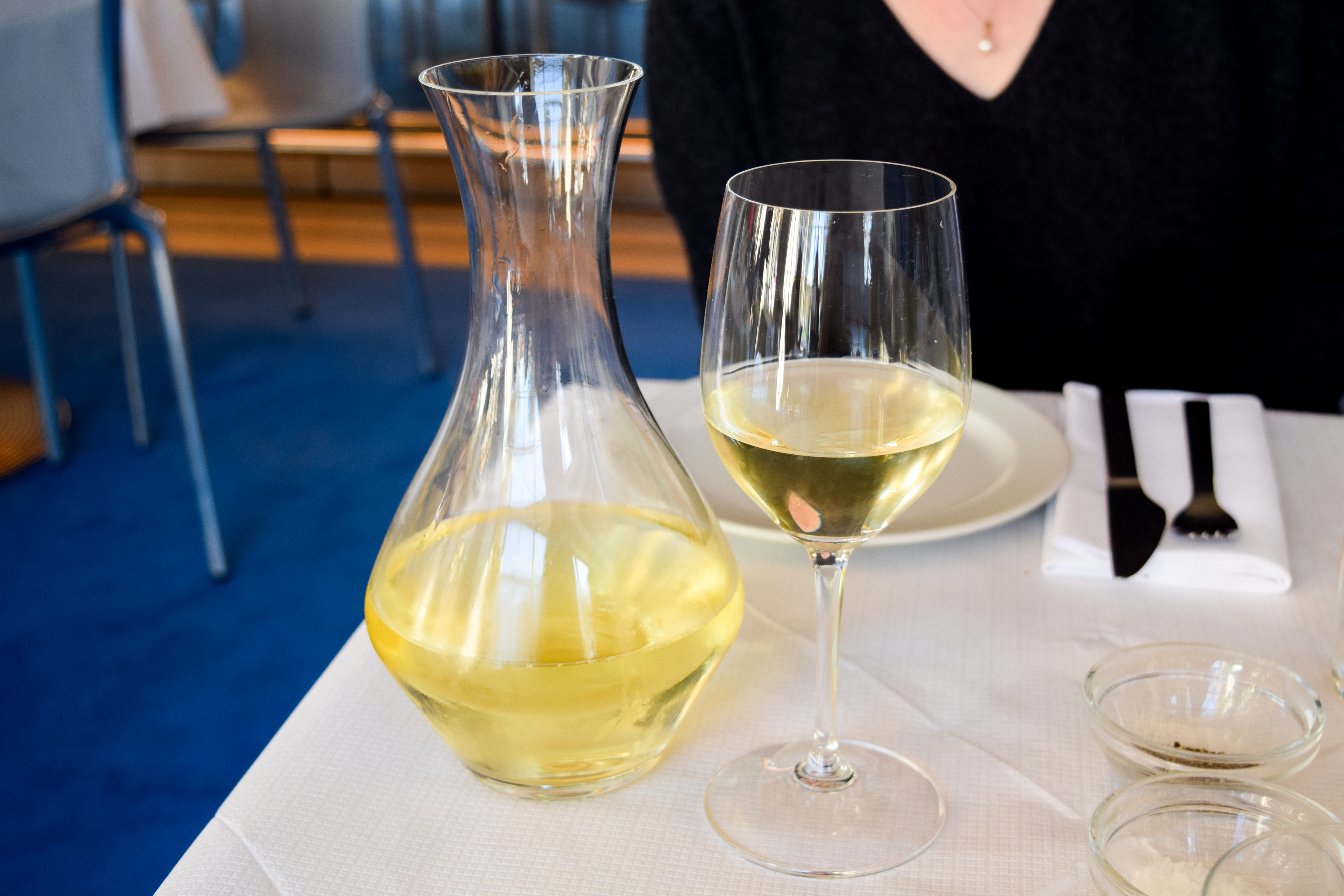 They take their wine seriously at The River Cafe. I’ve been to so many big money restaurants where they’ve not been on the ball when it comes to wine guidance (the last place I was really impressed with was Chateau de la Treyne, but what exactly have they ever got wrong?), but when we said to our server we were not sure she sent the sommelier over who, after chatting to us about our wine preferences and what we would be eating, chose us a perfect Sicilian number. Seriously, ask for help because they’ll probably do a better job than you will! 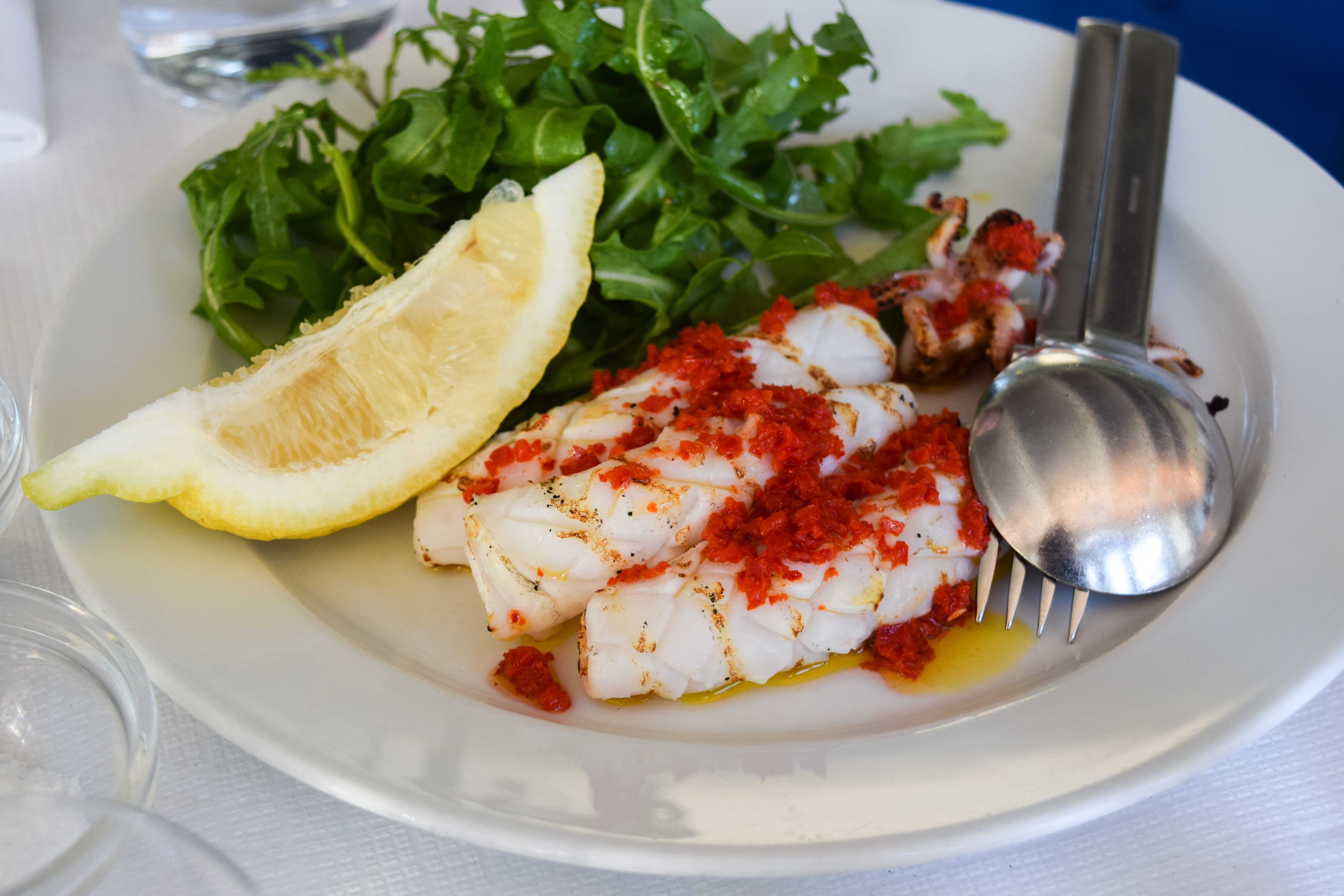 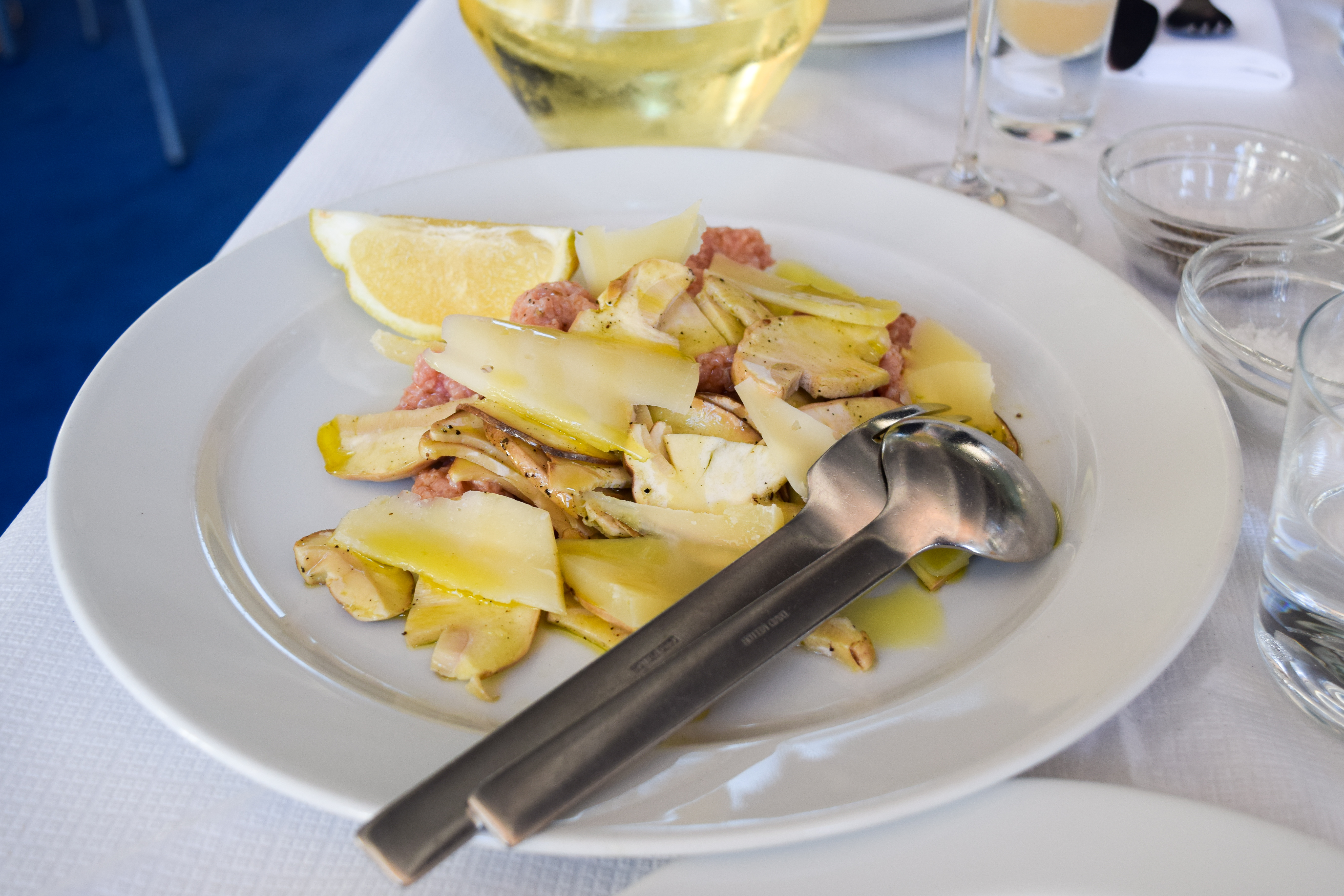 We chose to share two antipasti. The day before our lunch I’d been listening to Ruth Rogers being interviewed about the evolution of The River Cafe on Desert Island Dishes as I walked through the park so I knew when I saw it on the menu I had to order the calamari, simply grilled and served with chilli and rocket as it is one of the few dishes that people get really upset if it is not on the menu. Most things, where appropriate at The River Cafe are served with a good drizzle of their house olive oil and a good wedge of Amalfi lemon, and it all came together beautifully. So fresh, so punchy, and most importantly so impossibly smoky and tender.

When I saw finely chopped veal tartare served with raw fresh porcini and shavings of Monte Veronese cheese I, massive fan of all things tartare that I am thought it would be the perfect dish to bridge the gap between summer and autumn. The meat was so delicate, light and perfectly seasoned, and the mushrooms so full of the earth. The nuggets of beautifully perfumed, not too salty, not too sweet cheese were such a treat (really, I’m not actually supposed to eat cheese made with cows milk but for my trip to The River Cafe I decided to just do it anyway as long as I did not go too overboard, as I had a niggling suspicion that I’d not regret it even though I may – and did – end up feeling a bit icky afterwards!) and when you took a bite of everything together the flavours were so perfect, and just that little bit unusual. This is the place where you want to order a wild card. 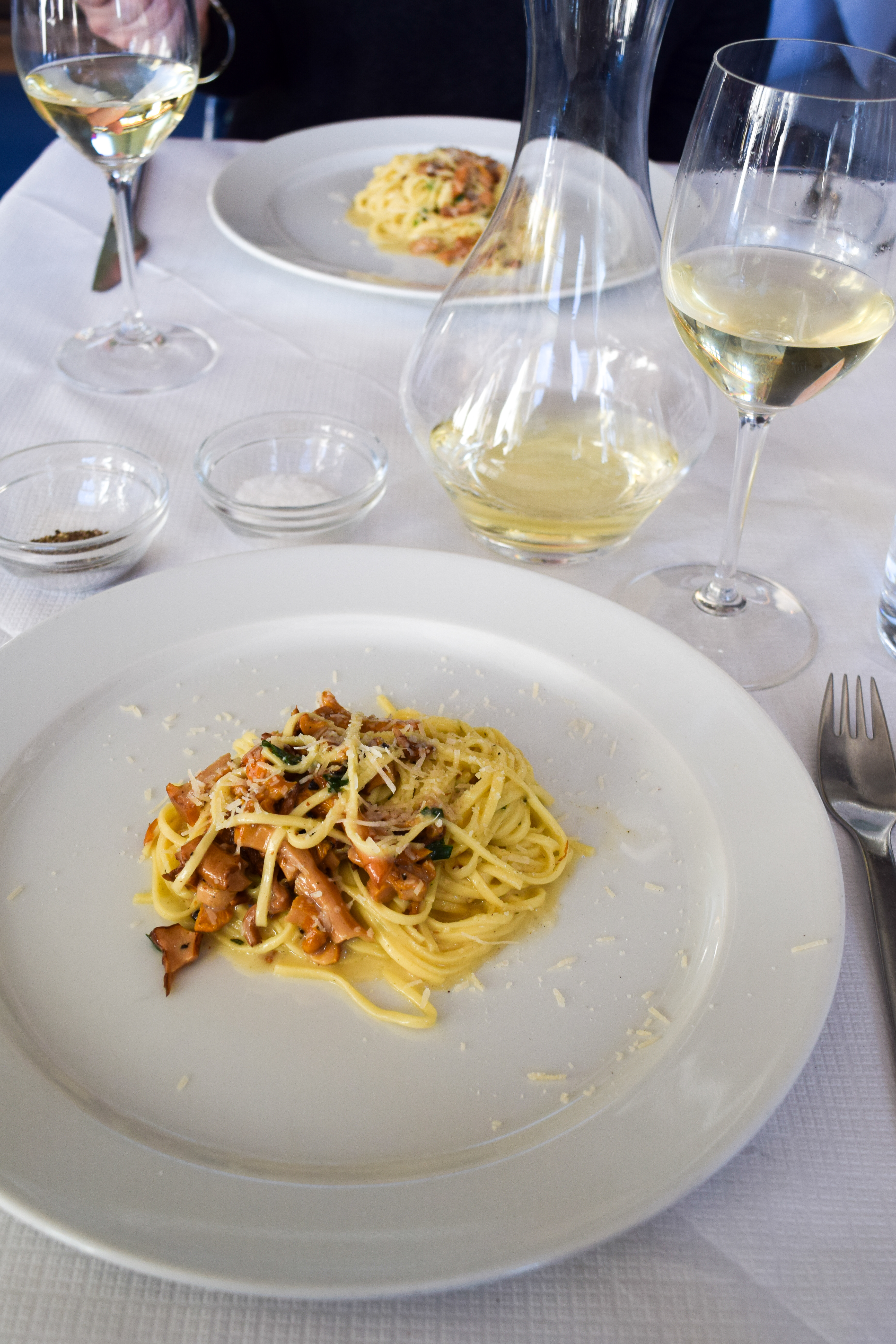 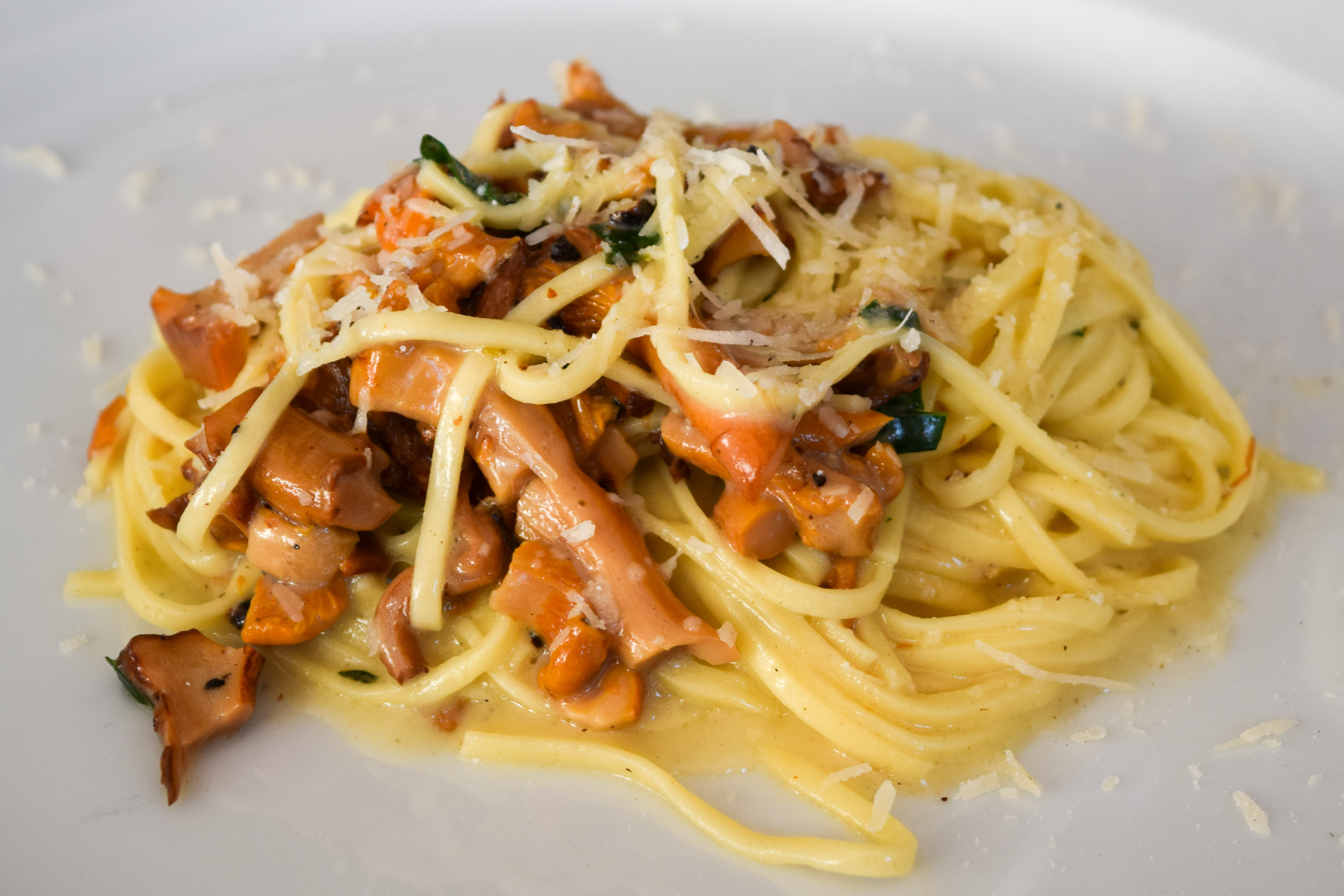 For our pasta course we stuck with the early autumn theme and ordered a plate of taglierini with Scottish girolles and parmesan to share. They kindly split it onto two plates for us, which was just another mark of the incredible service at The River Cafe. Not just the sommelier; the staff were all so bright and friendly, and we kept on missing when our empty glasses were refilled and our bellini glasses were whipped away!

Okay, so our pasta was just as amazing and twice as expensive as something I could have ordered at Pastaio, but it is still totally worth it. Rich, earthy and perfect. 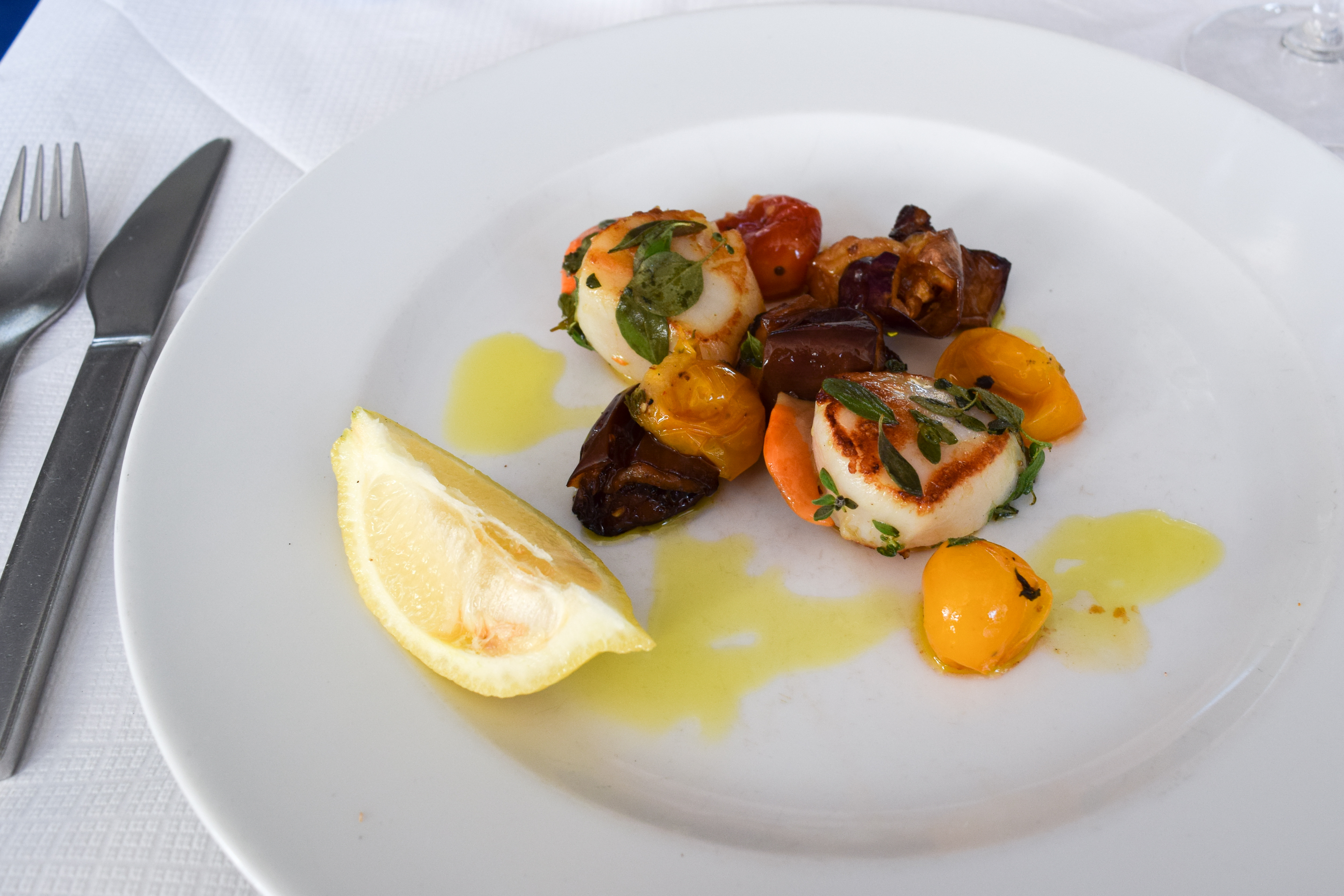 We shared our main of seared Scottish scallops, aubergine, herb vinegar, marjoram, herb vinegar, capers and tomatoes. Every element of the meal was perfectly cooked, as you’d expect, even the really tricky thing where you get the coral and the scallop both perfect, but still attached. The flavours were fresh and bright, which also bring rich and sophisticated, and I feel the aubergine deserves a particular shout out for being both not fatty, but also full of the delicious olive oil it was cooked with at the same time. 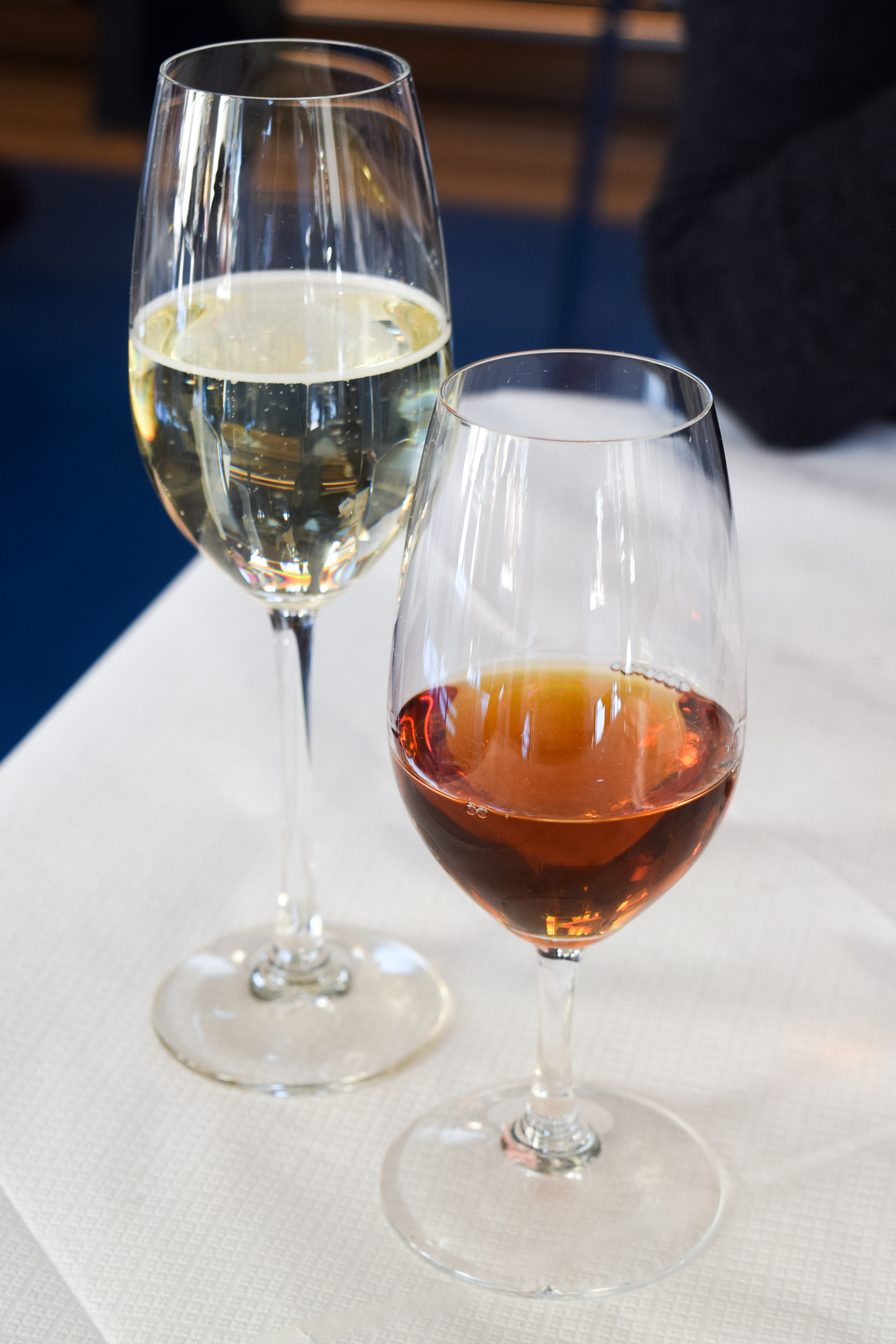 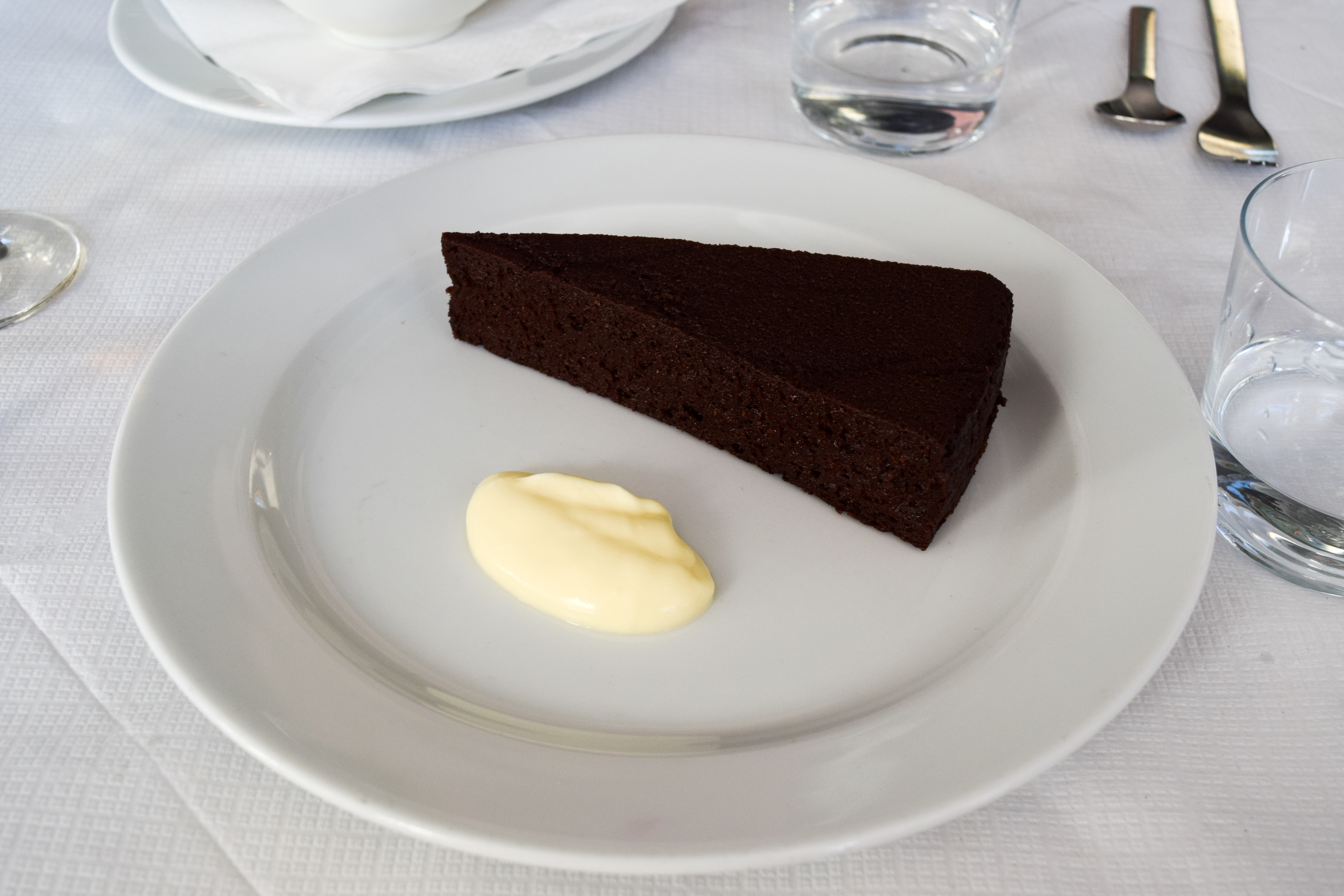 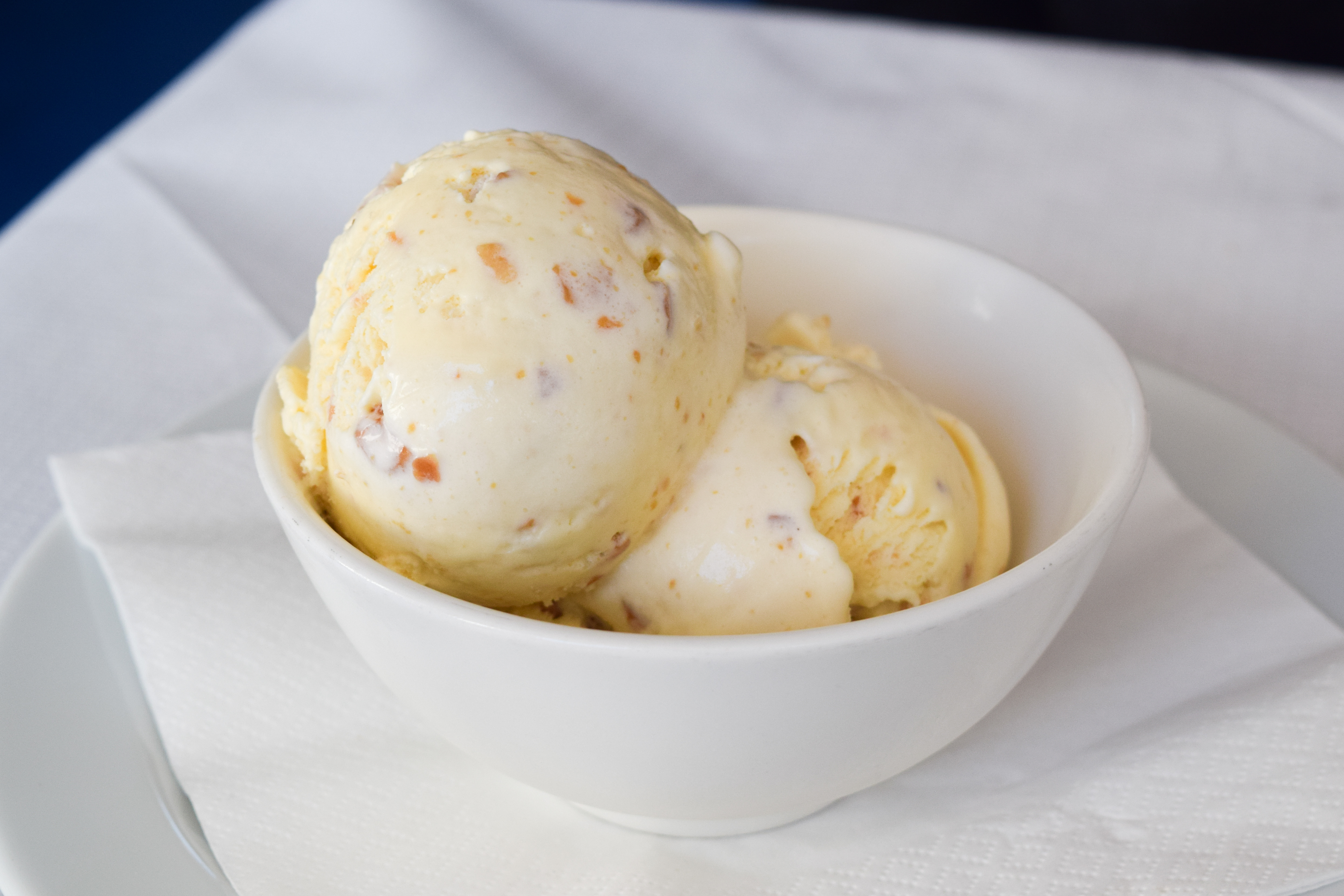 We ordered dessert wines to go with pudding, a lovely vino santo, and a simply fantastic Asti Spumante which, as the cheapest option on the menu needs a shout out as most people may overlook it as the budget option; white being sweet and sparkly with a perfume of nectar, it still managed to be super refreshing and paired perfectly with both of our puddings.

Another one of those dishes at The River Cafe that people would be upset if vanished from the menu is Chocolate Nemesis. I know, you’ve had chocolate nemesis before, it appeared on menus everywhere when the first River Cafe book came out but I’m telling you not a single slice you’ve ever had is as good as the real thing, impossibly chocolaty, managing to be like a chocolate truffle and a structured cake at the same time, the texture is impossibly good. I can’t think of a better way to end a meal (though, which simply perfect rather than impressive, the toasted almond gelato sure tried to give it a run for its money!)

So, was our long awaited lunch at The River Cafe a disappointment (the way, most memorably, Petite Trois in Los Angeles had been)? Honestly, it was worth every penny and what is more I’d happy eat there for all and any future London-based special occasions, even though I have a list of such restaurants I’ve been saving for such events for as long as my arm. Love fresh, simple, ingredient-driven Italian food and you’ve got a birthday, anniversary or engagement coming up? The River Cafe is the place to be. 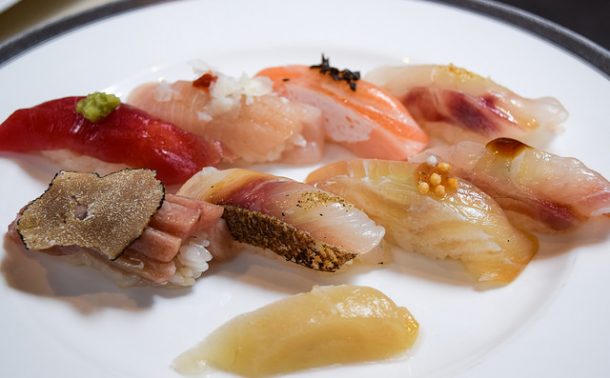 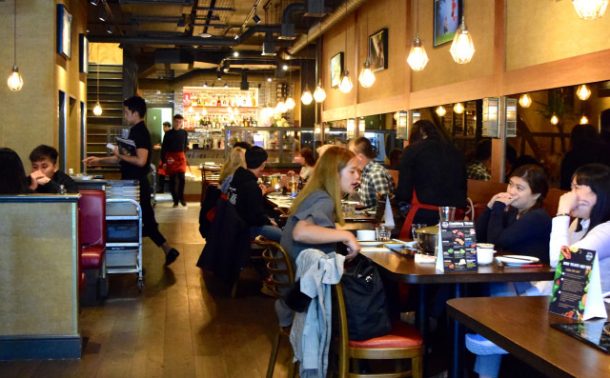 Eating Out Places To Eat In London: Hot Pot, Chinatown 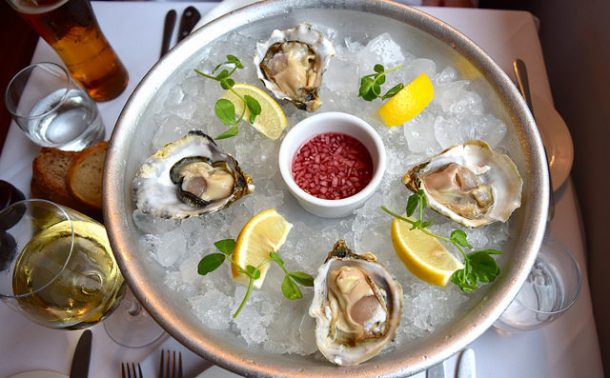 Eating Out Places To Eat In London: The Gun, Docklands