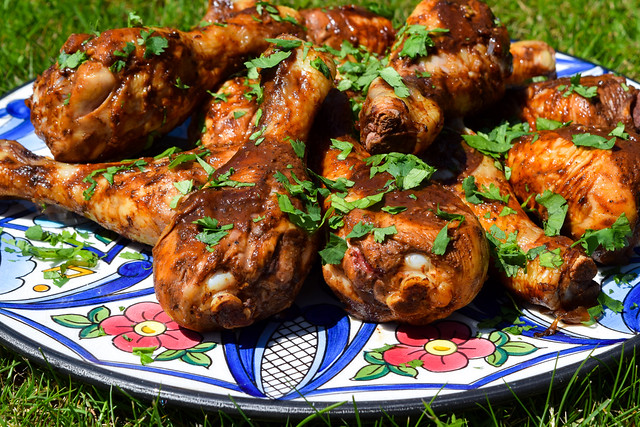 Is it just me or does no one make chicken drumsticks anymore? Have they well and truly been relegated to retro billing? I’m even finding it hard to find packs of drumsticks in the supermarket anymore, like they’ve all been replaced with my dinner time hero, skin on, bone in chicken thighs, and the much trendier chicken wing. It’s funny, because each chicken has two wings, two thighs, and two drumsticks in them (as well as the breast, obviously!) I love batch cooking drumsticks in the summer for picnic lunches, or to serve simply alongside a big green salad. Let us bring back the humble chicken drumstick as the ultimate summertime finger food. 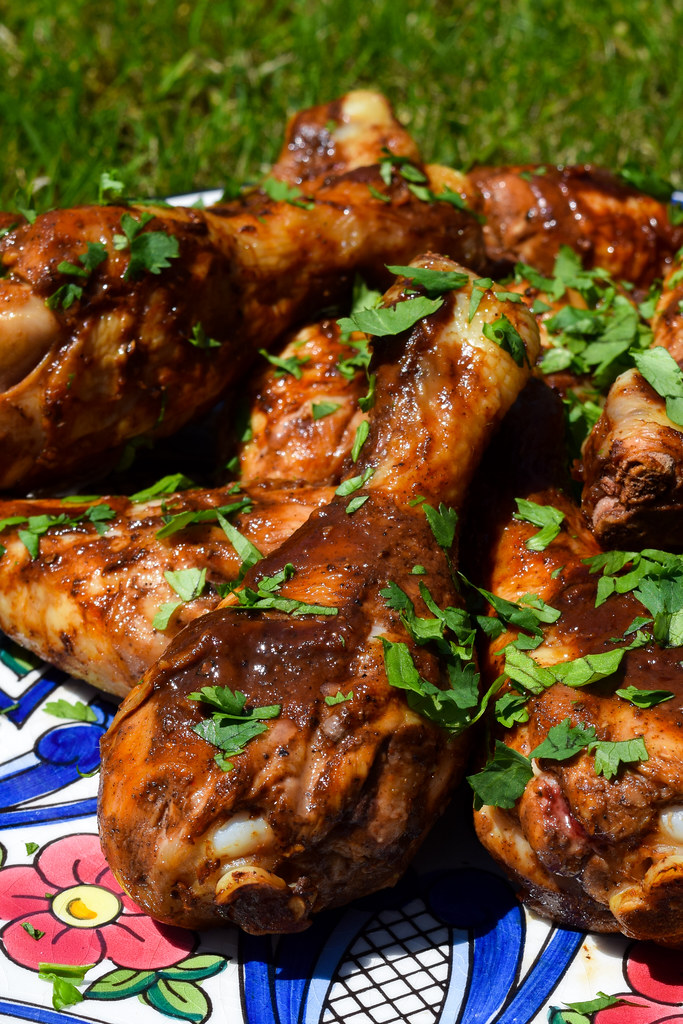 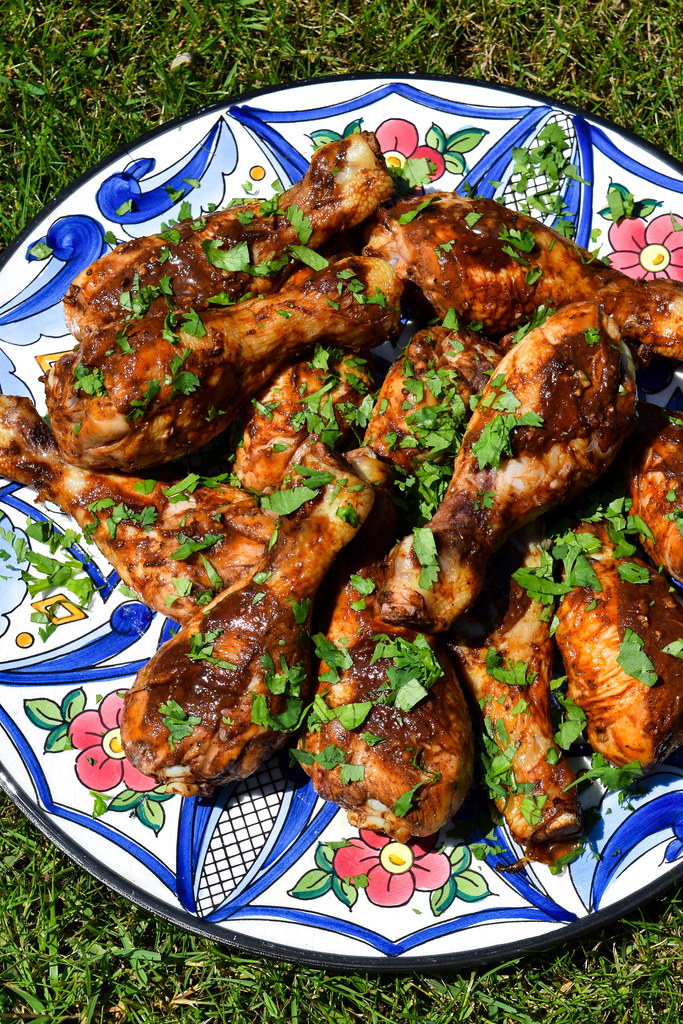 Ask anyone in my family and they will tell you that this is the only way to make chicken drumsticks. Other recipes have been tried over the years, but every single one has paled in comparison. For as long as I can remember the recipe has existed, handwritten in my Mum’s impossibly neat handwriting and a blue biro in the green leaf patterned notebook where she copies down all of the recipes she wants to keep hold of that originally came from magazines and as part of long forgotten food packaging. I supposed that is where these ‘Spiced Island Chicken Drumsticks’ came from, once upon a time.

The recipe makes twelve drumsticks, which usually lasts my Dad and I two lunchtimes. As four lunches on the trot would have been a bit much – even for him – they were on hiatus while I was away at university, so recently when I was craving a batch I realised that the original sweet chilli sauce the recipe called for (thick and consistent, rather than the clear Thai version with chunks of chilli we get these days) is no longer available, so I have changed it for a Caribbean-style hot chilli sauce – which, looking at the recipes title, is probably more in keeping with what was originally intended, the recipe written before world flavours became readily available in the supermarket. It does, however, make the marinade a lot spicier than we had it when I was a kid, so if heat is not your thing, feel free to dial down the amount you add. I find halving the quantity still provides great flavour with less of a kick! 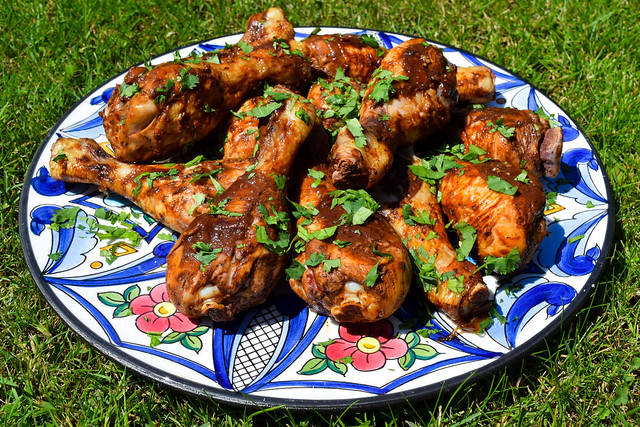 I’ve only made two more minor changes. One, the addition of roughly chopped coriander sprinkled over the platter; yes I originally did this for presentation, but when we were eating them soon after, I realised that it does go really well with the drumsticks, adding another layer of flavour. Two, my mother makes little tin foil handles for the drumsticks to stop you getting sticky while you’re eating them. I do this for picnics still, but I prefer to save the foil when I’m enjoying these at home, gnawing the sauce-burnished skin off every inch of bone instead.

My Mother’s recipe for Spiced Island Chicken Drumsticks is perfect to make ahead for summer lunches and picnics – and the spicy, tangy marinade is made from ingredients you’ve probably already got in your fridge or store cupboard. 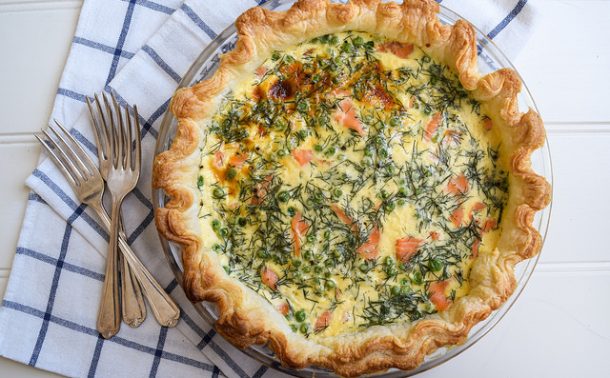 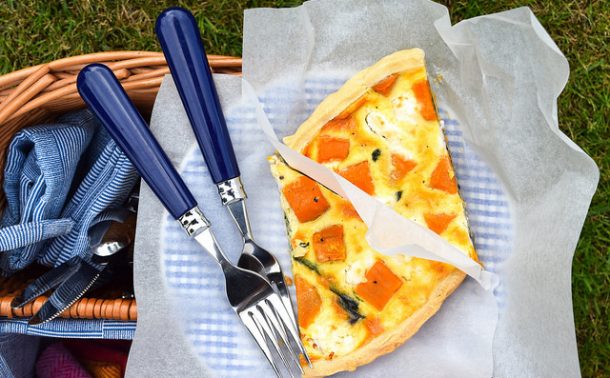 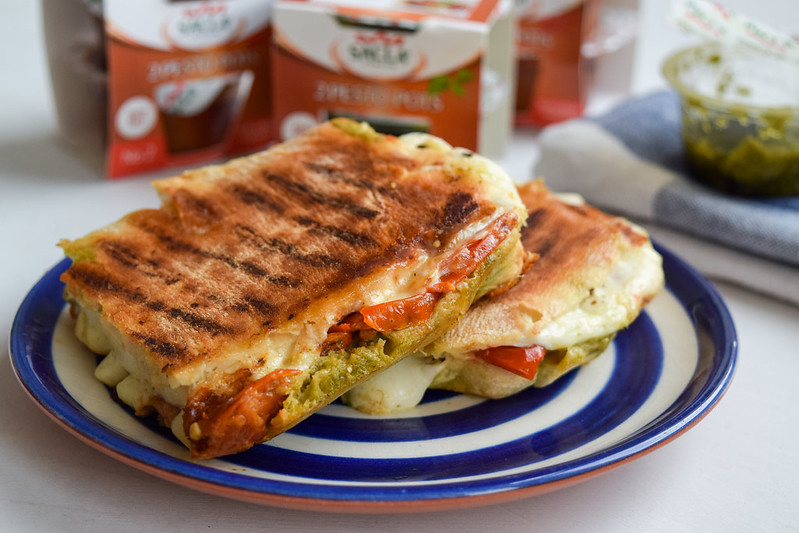