Behind The Scenes Shooting My New Cookbook, One Pan Pescatarian

Next week, next Thursday, a week tomorrow, hopefully those of you who have pre-ordered a copy of my second cookbook, One Pan Pescatarian (ad) will have one of the very first copies arriving on your doormat. It has literally made my day every single time one of you has said that you’ve pre-ordered, and I honestly can’t wait for it to finally be out in the world and to see how you all enjoy this collection of one pot, one pan, veggie, vegan and fish-forward recipes.

When I finally submitted all the photos for Student Eats (ad) I texted my agent Diana to tell her that no matter what, no matter what I was offered I was never going to photograph my own cookbook ever again – I really did not enjoy the experience, and that translated to the amount of excitement for shooting this new book I felt when I saw what a fantastic team my publishers at Yellow Kite had put together to bring my recipes to life.

So, today I thought I would take you behind the scenes of what has been the most exciting thing I have done in my food career so far: spending 8 days just before Christmas in the studio with that incredible team helping produce a series of frankly pinch me beautiful pictures to illustrate One Pan Pescatarian.

Max and Liz make up the fantastic husband and wife photography duo Haarala Hamilton who shot the book, and we did it all at their cosy South London studio. A beautiful space full of natural light (though we used professional lighting for every shot) it was half photography and props areas, and half kitchen where we made all the dishes, with a table in the middle for taking breaks, catching up on some work between shots and of course eating whatever food was leftover from already completed shots for lunch each day! I want to say we shot roughly 75-80 of the 100 recipes in the book across those 8 days, with one day given over to nailing the cover, and then just shooting the dishes we’d made for the cover to go inside the book once we were happy with the shots.

There were two of us cooking in the kitchen every day, me and our shoot assistant Octavia who was a total lifeline to me – I honestly learnt so much about food styling from her, and I can already see the difference in my blog shots after learning bits and pieces from the studio team. She also helped me cook everything – I’d never have managed every single dish in the required time by myself! On one of the days Lara came to help me out instead, bringing a totally different approach to food styling and also helping to create some stunning images.

We worked on between 1-3 dishes at once, depending on complexity from shoot lists I’d put together trying to group similar ingredients so our Ocado deliveries to the studio every few days were not too massive (remember when we could get those?) and we had not put too many slightly more complex and time consuming dishes all on the same day. These shoot lists and shopping lists were key – on the days in between shooting I had lists of slightly more speciality ingredients I needed to get hold of for the next days shooting, and for extra equipment I needed to bring from home each morning the supplement what we had in the studio.

Props, plates, backdrops, cutlery and yet more food styling was done by Charlie. For those of you not in the know, props for professional shoots come from prop warehouses, massive stocks of different photo-friendly pieces of kitchen and baking equipment, plus backgrounds you can hire out for shoots. She went through several locations looking for all the great pots, pans and dishes in the book – going back after several days to find more when she realised the sheer number of recipes I had cooked in a shallow casserole dish (!) so there was never two similar dishes next to each other in the book – and finding those little details that made every shot special.

Nikki, who did the final designs for the cover and all of the insides of the book (I can’t wait to show you her beautiful layouts!) was also in the studio most days doing art direction, making sure everything we shot had a consistent look and feel, and making sure it would work in a physical book. She brought so much focus and energy to the shoot, and really helped everything come together.

Also in the studio we had Amy from Yellow Kite project managing, keeping everything on track and working with Nikki on laying the images we’d shot into a layout on a laptop so we could see how the images would flow through the book as we shot (as well as keeping up with edits from the copy editor on the manuscript at the same time!) and on other days like the cover day, we had yet more voices from my publishers – including my editor – making sure all the different versions of the cover we shot worked for what all the different people in editorial, in marketing, in sales had in mind for the book.

One of my favourite features in the book are the three double spreads that introduce each new chapter, like mini internal covers for vegetarian, vegan and pescatarian food. We shot these with a collection of dishes from each chapter that might sort of go together as a bit of a feast (trying to figure out what to put on the fish one caused me a real headache for days!) before shooting each individual dish to go inside – I tried to plan these for some of the quieter days – you’ll find them as a double page spread at the start of each chapter.

We shot the cover in a similar fashion, but we took all day doing that, shot any dishes for the inside that still looked good after we’d been going a while afterwards, some of them like the Vegan Veggie Paella needing to be re-made and re-shot another day, but more about that next week where I’ll be sharing some details of how we designed the cover for One Pan Pescatarian.

If you’ve not already, you can pre-order your copy of One Pan Pescatarian here! (ad) 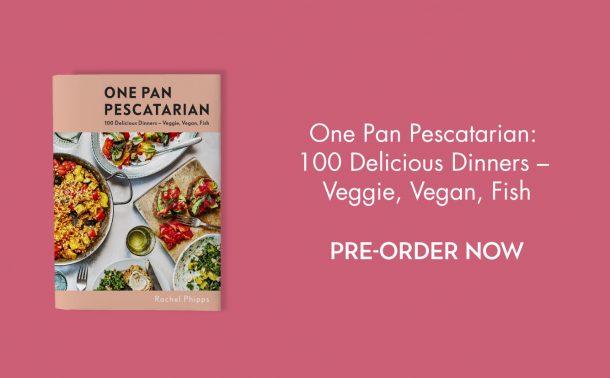 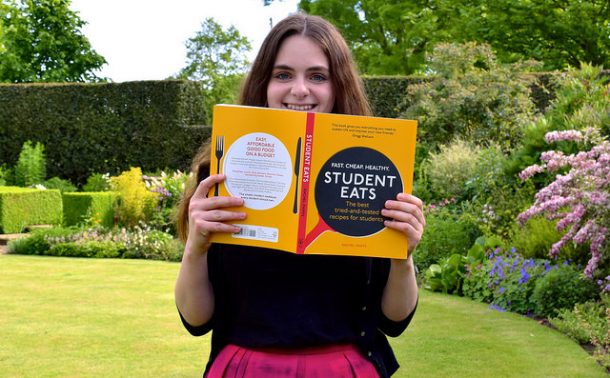 Cookbooks My Publishing Journey (How I Actually Got My Book Deal!) 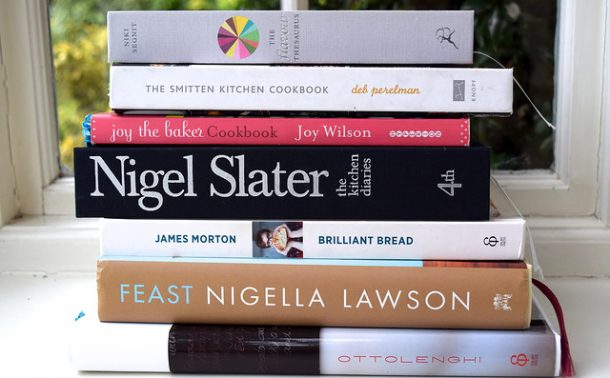 Cookbooks My Favourite & Most Loved Cookbooks