How To Make Your Own Mayonnaise

Did you know how stupidly easy it is to make your own mayonnaise, and by extension, aioli? I’d always read recipes for it that sounded really difficult by hand, or involved a food processor which therefore leads to a lot of washing up, and a lot of bother when you can just get mayonnaise out of a jar. My finding out why shop bought mayo is white while the homemade stuff in France I have is yellow (the processing involves a centrifuge) and a crash crash in making mayo in my wonderfully new ceramic Cole & Mason Pestle & Mortar that John Lewis were kind enough to give me and you are going to have to put up with me banging on about for quite some time with wonderfully fun chef Rachel Green led to me deciding I’d me making my own in future. Just as a side note before we get onto more about the eggy, gloopy stuff. You might notice something a bit different about these photos; welcome to the first recipe shot in my new London kitchen. Did you know, you’ve never actually seen a recipe from the last two years since my food photography became at least passable that I’ve shot in an actual kitchen before? Everything I shoot in the Countryside is either on one of the two patio tables, the patio floor or a big slate tile perched on one of the aforementioned surfaces. Or sometimes in the conservatory if it is pouring it down with Great British rain. In Los Angeles, almost everything without fail was shot on the patio table I showed you at the end of this pasta sauce recipe post. Because of lighting constraints only one recipe was ever shot on the floor, and one on the dinning table as I ended up using an Instagram shot. Even in France I use one of the slate floors, or occasionally shoot the food right at the table as we eat it. All this is because every kitchen I have ever used has been dreadful for photography. They are all poorly lit, and in the case of the LA kitchen, have a simply putrid coloured granite work surface. The natural light outside is brilliant for food photography, as well as you learn the right times of day in what seasons to shoot. The problem is, I live on the third or fourth floor (the stairs are so many they confuse me so I have not quite worked it out yet!) in East London. I no longer have the outside space to shoot, so, with much playing around with my camera, a mug and dissembling our kitchen while my flatmates were out, I found the perfect corner, usually under the microwave to shoot. You better get used to this stretch of granite. Okay, so back to mayonnaise. There are recipes with set measurements of different ingredients to make mayonnaise, but I think they are pointless. Homemade mayonnaise is great because it can so easily be personalised. This is what you will need though:

In a pestle and mortar, break up your egg yolks. Add a small splash of oil and mix vigorously until it has vanished and the mixture is smooth. You need to keep on adding oil like this, little bit by little bit and mixing in until smooth until the mixture has thickened and is a little gloopy and glossy, like the mayonnaise you’re used to, but yellow. If you add too much oil at once your mixture may split, so while it seems like a lot of elbow grease, you need to keep on going at a slow and steady pace until you mixture is just a little ticker than you’d like. The acid you need to add next will thin it out a little again.

Now you need to season to taste, using acid (I used a squeeze of fresh lemon here, but I prefer White Wine Vinegar, but I don’t have any in my new flat yet), sea salt and tiny amounts of mustard. I say tiny amounts, because you don’t want the mustard flavour to overpower. Usually I use Maille Dijon Mustard from France (though you can get the brand in England easily), but at the moment I have mustard decanted from massive vats at the wholesalers into old Bonne Maman jars which is so spicy it will blow your head off. This has taught me that different mustards have different heats, which is why you need to season with caution. As with any type of seasoning and flavouring, you can always add more flavour but you can’t take it away. Enjoy on fresh bread, as part of a traditional potato salad or, how I am used to having homemade mayonnaise, as a dip for fresh prawns and seafood. You can use this same recipe to make aioli by crushing a little salt and a small garlic clove first before adding the egg and the oil. In my aioli, and in my mayo if I am making it to be paired with seafood I also like to add a little chopped fresh dill into the mix at the end to make things more interesting. 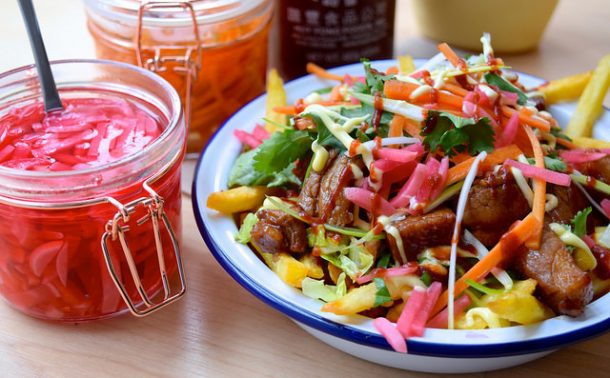 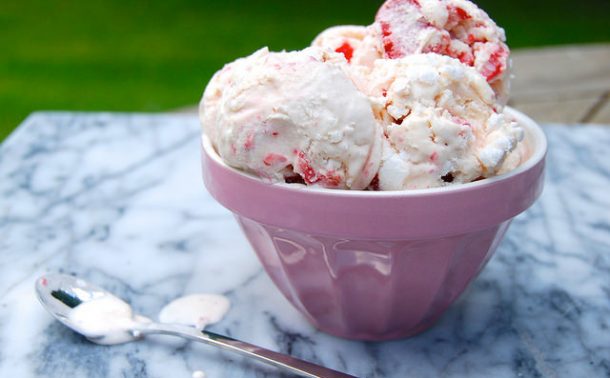