Places To Eat In Los Angeles: Son of a Gun, West Hollywood

I know a lot of people feel uncomfortable eating alone. I for one quite enjoy the experience if I have a good book or the newspaper to hand, the restaurant has a great atmosphere and if the food is truly excellent. A quiet, solo lunchtime reading Damian McBride’s Power Trip (yes I’m the sort of person who reads heavy political biographies on holiday) at Son of a Gun on West 3rd Street in West Hollywood turned out to be one of the most enjoyable experiences of my Los Angeles trip not just because of the simply sublime food, but because of the overall fantastic experience of dining in the acclaimed restaurant. 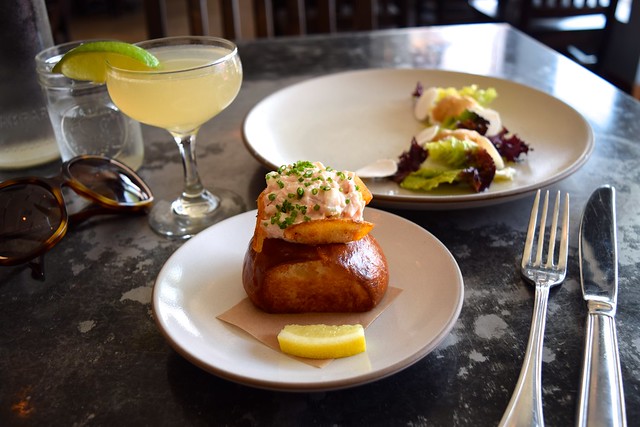 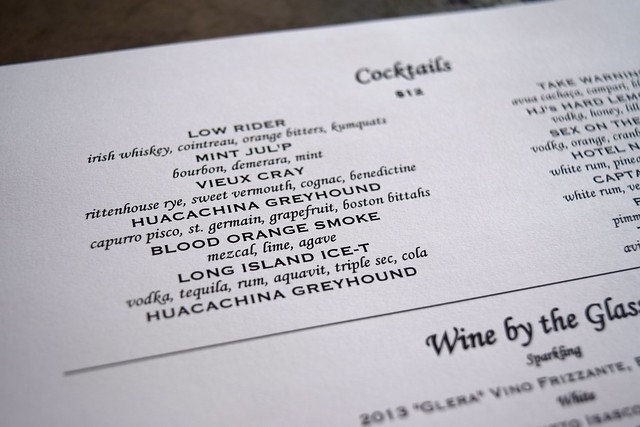 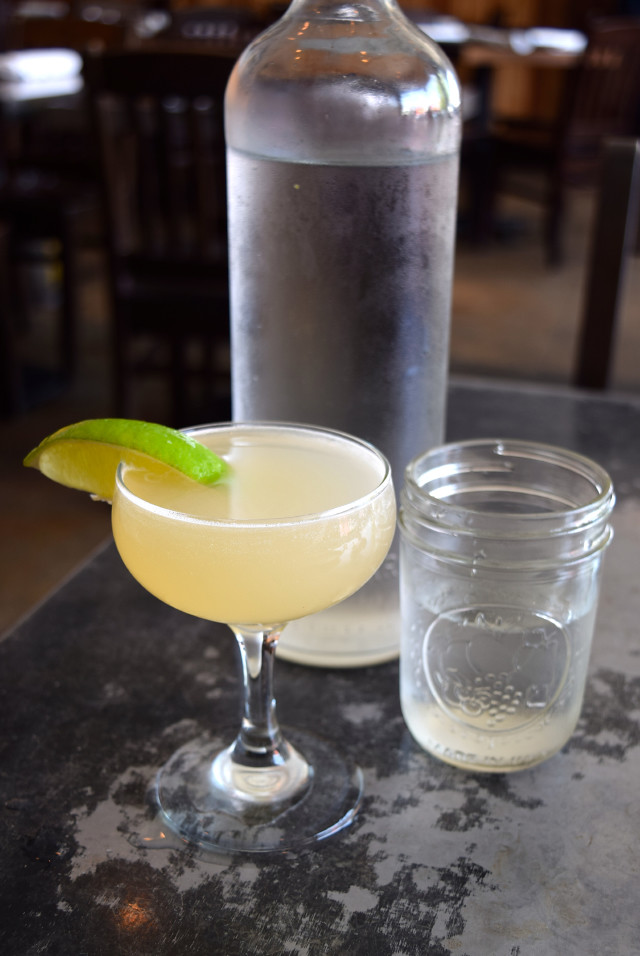 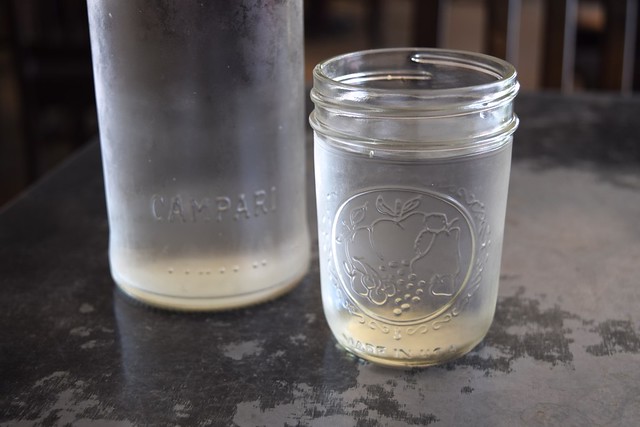 Kicking off with a cocktail while I perused the menu, I started off with a Huacachina Greyhound, a blend of capurro pisco, St. Germain, grapefruit and Boston Bittahs. It was slightly sweet, but also rather sour and sharp, great to sip by itself, but actually even better with food; I’d pair it with the lobster roll I wolfed down.

Aside from the pretty jar and old Campari bottle presentation, I just wanted to make a note of the water I was presented with at the table. As you probably all know from the news, California is suffering from a crippling drought at the moment, but in the month that I was in the city I did not really see much that the people of Los Angeles were doing to help. So, kudos to Son of a Gun for charging 10 cents for water for the table. It is barely any money at all, but putting a charge for providing it, they’re making you think about if you really want or need it for your table. Every little bit of water saved helps! 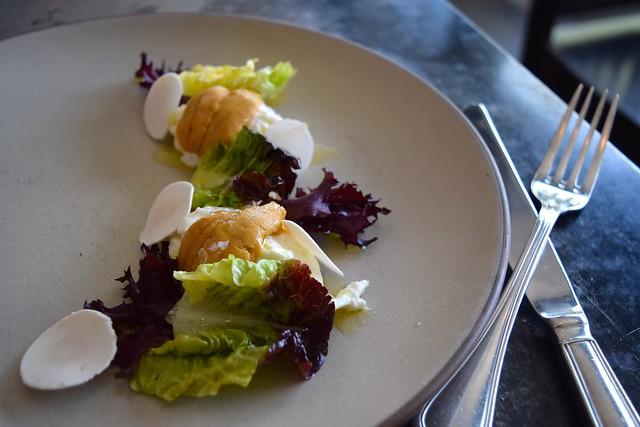 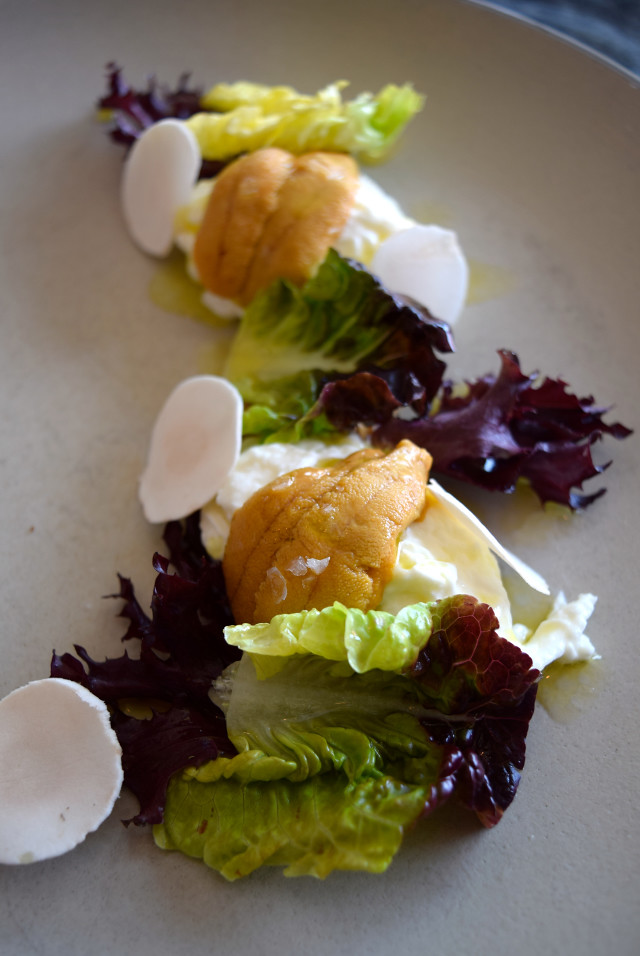 The first small plate I ordered, from the ‘Raw’ section of the menu has to be up there as one of the very best dishes I’ve ever been presented with. It is simply an arrangement of Uni, creamy Burrata, thin shavings of button mushroom and Yuzu juice, served with a few lettuce leaves. Now, I’d never actually tasted uni before (sea urchin) before, but the many hours I have spent watching Anthony Bourdain documentaries and episodes of the American edition of The Taste had me well prepared for uni to be the crowning ingredient in Los Angeles cuisine; the city who have banned fois gras’ answer to the French delicacy. Well, uni is rich, both indulgent and delicate at the same time, and with just a whisper of the sea, without being too overpowering in any form of fish sense. Paired with creamy cheese which really complimented the richness of the uni, the yuzu and lettuce which added a little brightness, and the button mushrooms which added a clean element and texture to the dish, this has to have been the best plate of food I ate in Los Angeles, and something you must eat if if is on the menu when you visit Son of a Gun. Honestly, I think it just may give the hand dived scallops at Lima in Fitzrovia (London) a run for its money as the best plate of food I’ve ever eaten in a restaurant, and I think uni is going to become one of those items on the menu for me that I’ll always gravitate towards. 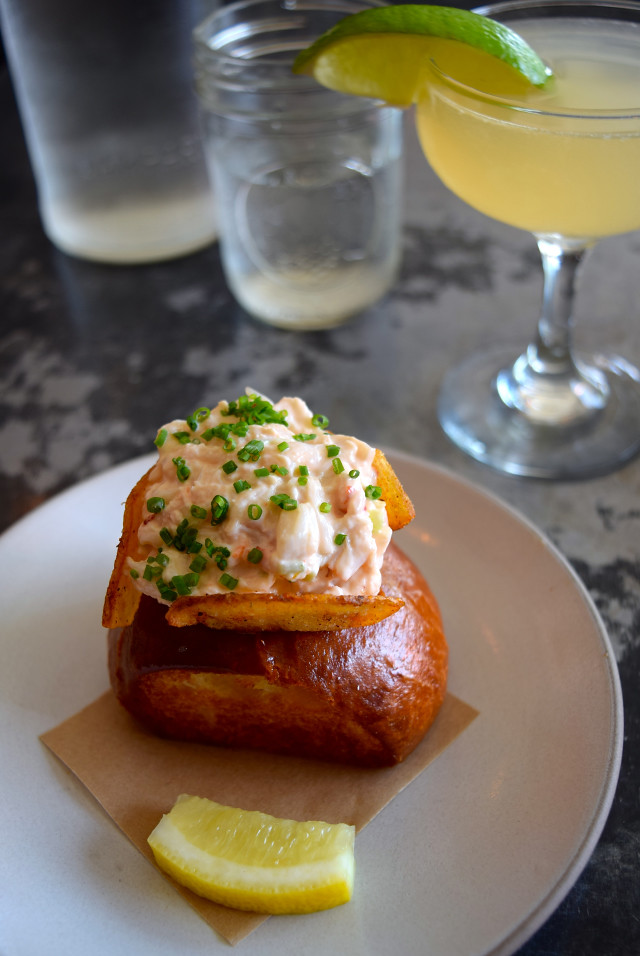 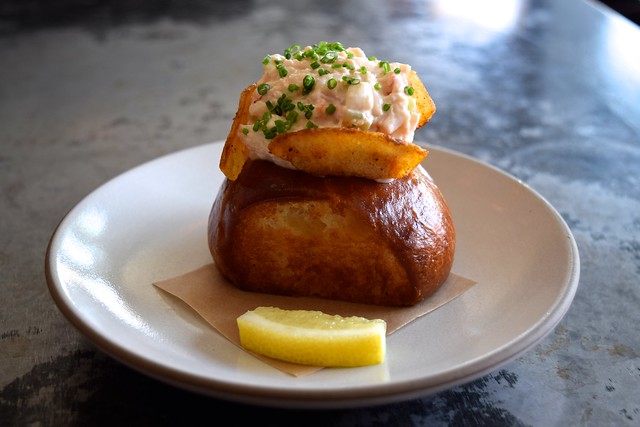 Next up was the lobster roll (and actually the first lobster roll I’ve eaten in the USA, as I’m usually eating in London, I’m usually digging into B.O.B’s Lobster), a little delicate portion (but surprisingly meaty) of creamed lobster in a fried brioche roll, simply garnished with fresh chives and a few crisps as a nod to the traditional accompaniment. I enjoyed this roll immensely (though the way it was assembled you did need to eat it with a knife and fork), and I had none of the complaints you usually hear about substandard rolls, that there is not enough flavour or lobster meat, or that the bread is too oily. However, that being said I think the lobster rolls I’m used to in London have the slight edge. Though, that being said with this lobster roll priced at $8 and a B.O.B’s half roll (this sized) usually priced at £7.50, this version is more of an enjoyment than an indulgence. 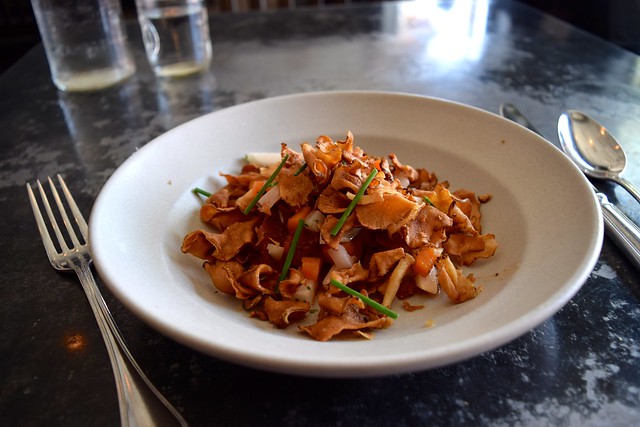 I still felt that I had room left for something savoury, so I asked my server what he recommended from the ‘Raw’ section again. The Lemonfish Poke, Black Radish Escabeche, Citrus and Crispy Sunchoke dish soon arrived at my table. The lemonfish was wonderfully fresh and light, and a revelation for all poke and sashimi fans served with the fresh and crunchy radish in its citrus dressing. I also enjoyed the crispy sunchoke (basically a more refined version of the vegetable crisps I’m always buying in Waitrose when they’ve otherwise sold out of my favourite popcorn flavour) which added contrast to the dish, but I think there was far too much of it; the delicious fish was somewhat lost beneath. 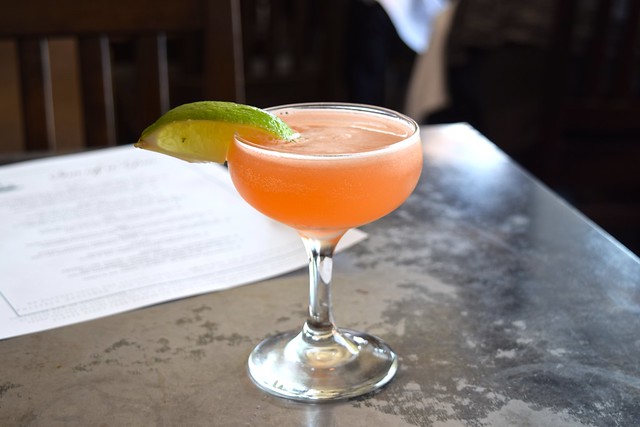 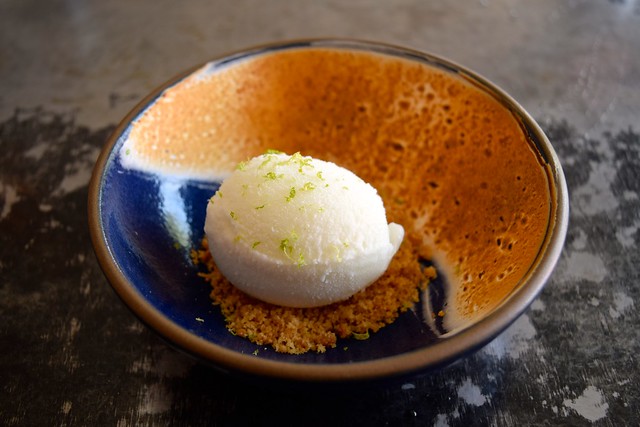 It was time for another cocktail (I can’t remember the name, but I enjoyed it even more than the first, it had peach brandy in which provided a wonderful finishing note) while I awaited my first dessert: Frozen Lime Yogurt, Graham Crumble and Toasted Meringue, which was spread around the size of the bowl so that you got some in every bite. This has to be, hands down, the best dessert I’ve ever had; I’ve just gone back through all of my archives and I can’t find a competitor. The presentation was beautiful and clever, the frozen yogurt both light and creamy with the perfect punchy flavour, and went well with the meringue and cracker flavours. I normally don’t even like graham crackers, but here the crumbs were very more-ish. 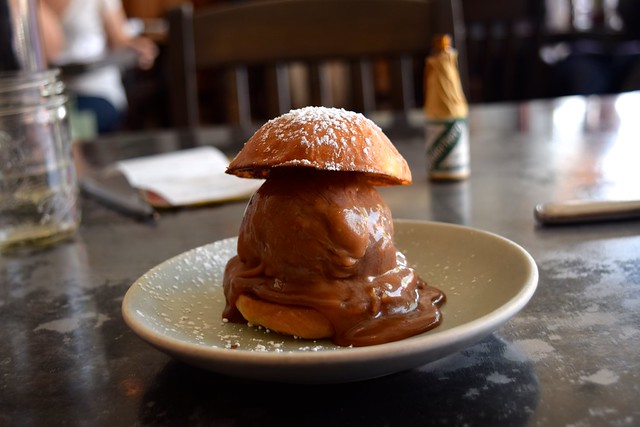 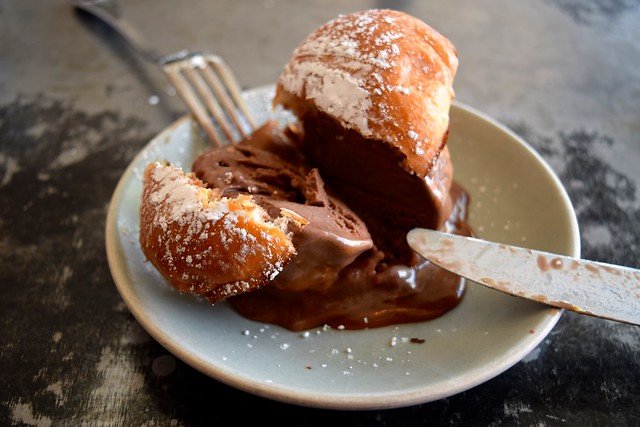 It got to that point of the meal where pretty much the only thing left to do for my second dessert was to go all in and order the Italian Hamburger: frozen gianduja and caramel, sandwiched between two pieces of brioche and finished with a subtle sprinkling of Maldon sea salt. Not too sickly but incredibly indulgent, it made for the perfect end to the meal, and I honestly think you should order this as well as the frozen yogurt. I want another one just writing about it. And for someone in London to put it on the menu. 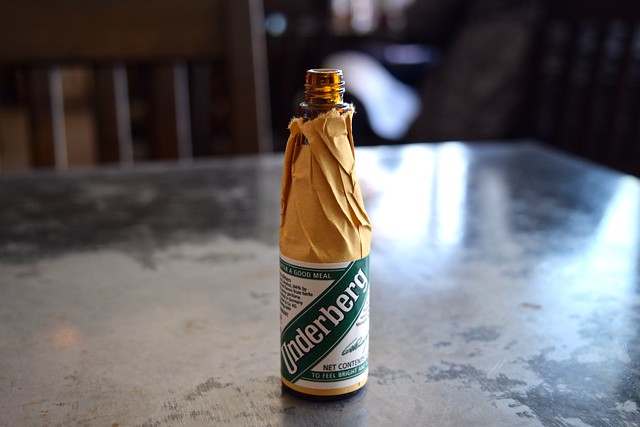 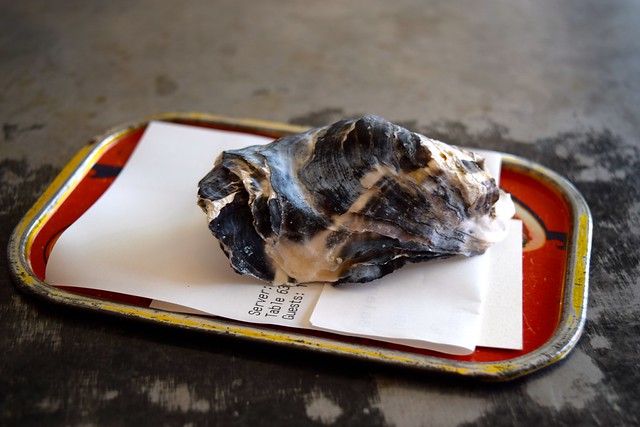 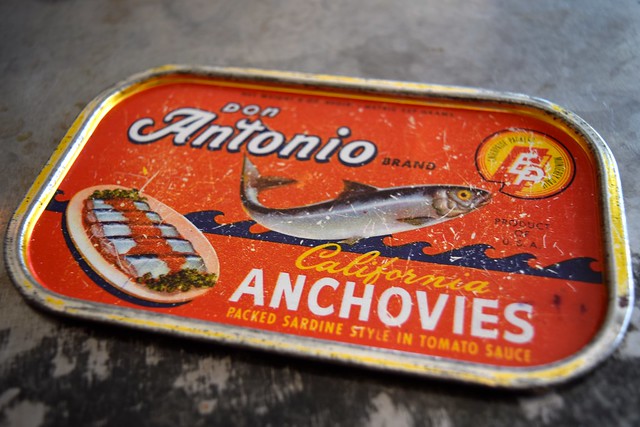 My bill came under an empty oyster shell, and accompanied with the lovely touch of a little bottle of Underberg, a German bitters that while is sometimes used in cocktails, is supposed to be taken all in one shot as a digestif. I managed a good gulp, and while it was unusual, I think it did help after such an indulgent meal. (On a side note, do you remember the citrus I was given with my bill at Salt Air? I think fun edibles that come with the bill is something else that restauranteurs in London should also adopt!)

I’ve been recommending Son of a Gun to absolutely everyone ever since I ate there, and if a trip to Petite Trois was not on the bill, as I’ve already ticked the Soot Bull Jeep box for Korean Barbecue, I’d have returned there for my last, celebratory meal before leaving the city. For sure it is going to go to the list of places I love that I must return to the next time I’m in the city. 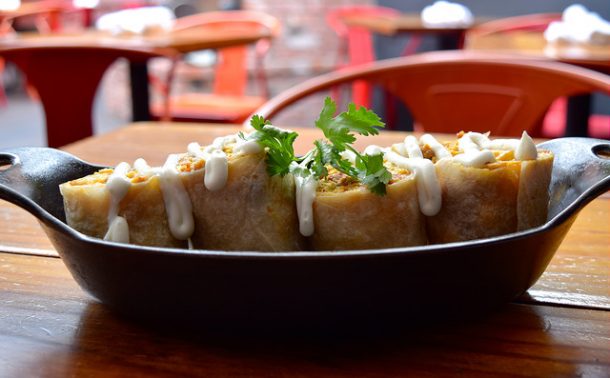