A little break from all things festive, before the year ends I wanted to share a few (mostly food related) snapshots from my weeks break at the French house. Mostly it was just good to get away. We spent our days reading on the upstairs sofa, watching movies in front of the fire, eating local oysters, and drinking bottles of fizz and Clementine 75 cocktails. It was also great to get out for a few walks in the quiet, frosty forest, and to visit a few of my favourite restaurants. We also stocked up on so many festive treats to bring back with us. I’ve always had a thing for French markets, and I think it has something to do with their hyper seasonal, hyper local focus that they have without even trying (which is something that can’t be said for some London markets I’m not going to name!) The Monday morning market in our nearest major town, Combourg, in April was full of mild potatoes, bunches of watercress and soft local cheeses, and the famous Saturday morning market I visited in Sarlat in June was laden with their small, sweet gariguette strawberries, bright, white spears of asparagus, and a lifetime supply of fois gras. Brittany in December is all about fat leeks, big bulbs of garlic, and more varieties of cabbage I’ve ever seen in one place together before, some as large as my head. I’m not sure why we even bothered looking at the menu for lunch at La Cour du Temple in Combourg: we know our favourites off by heart. A bottle of red wine by the fire, Brittany buckwheat galettes stuffed with creamed leaks and fat scallops, with a side of their excellent home cut chips. Sometimes an entrecote steak is involved for my father, and we all have crepes for dessert, either with salted caramel, or salted butter and sugar. Walks around the outskirts of Villecartier for me are alway about peace and quiet, and what I can spot depending on the season. Autumn usually finds me vanishing for hours at a time, gathering chestnuts and photographing wild mushrooms. In December, I’m playing a mental game of how many decorations I’d need to decorate some of the frankly mammoth Christmas trees that have been allowed to take root near the path! Lets talk about books. I did not read as much as I normally did, but for those of you looking for holiday reading recommendations, I thought I’d run through what I read. I finished off Philippa Gregory’s latest novel, Three Sisters Three Queens. She’s my favourite author, but it is one of those more niche historical novels. If you’re looking to get into her, I’d recommend trying The Constant Princess which tells the story of Catharine of Aragon when she first came to England, rather than her better known (but still brilliant) novel The Other Boleyn Girl. Also on the historical fiction front, I really loved was The Lady and the Poet by Maeve Haran. It’s a historical romance, telling the story of the poet John Donne and his romance with his bosses niece. It is a great holiday read if you’re into romance, but not of the Mills and Boon ilk, and I’d also recommend getting a book of John Donne’s poetry at the same time – the poems reproduced in the novel reminded me of how vivid some of his poetry is.

I decided to take a break from the heavy political books this time, but I don’t think anything can keep me away from food writing. I just made it through two foodie books this time around, The Palomar Cookbook which I think was only enhanced by the fact that I ate there this Autumn which is really fascinating if you want to read about Ashkenazi Jewish food from Jerusalem (most food in Middle Eastern cookbooks has Sephardic influences instead), and The Edible Atlas by Mina Holland, which I’m hoping to finish over Christmas. If you are at all interested in world eats, this wonderful book full of facts, stories, history and recipes will take you on a tour around the world, and is simply wonderful to get lost in. It’s a good time in the season for Cancale oysters (which are my favourite oysters), and other local crustations, such as langoustines and Brittany blue lobster are much sweeter than usual in December too, so obviously we found ourselves back at the scene of our last Fruits de Mer mountain, La Mère Champlain on Cancale harbour. Okay, so we only went for a few favourites this time, but with a nice crisp glass of white wine, it was the best seafood I’ve had since the last time we ate there. Last time we were too full for desserts, but we were not surprised that this time around they were just as excellent as everything else at the restaurant. Mummy had a lovely crisp cream/ local apple number, with a frankly divine local cider sorbet, and I had a wonderful chocolate fondant with brittany butter biscuit crumbs, and a really bright passionfruit sorbet and coulis. Daddy proclaimed the best creme brûlée he’s ever had. We took a turn around the oyster market so I could pick some more up to enjoy with bubbles in front of Paddington Bear that evening, and then headed off to the supermarket for our Christmas eats: a giant wheel of brie for our New Years Eve Party, loads of champagne and sparkling wine both for the party and for us to enjoy, and my annual hunk of fois gras to be enjoyed with fig jam. If they prevent me bringing either back to the UK after Brexit, I’m going to be seriously put out! 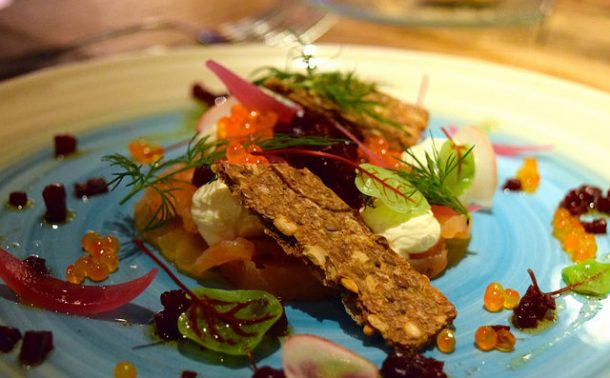