Snapshots From The Middle Of The North Sea + Reykjavík

There is no such thing as ‘night’ in some of the Northernest parts of the world in early Summer. From my research I knew that during Winter Iceland’s inhabitants were only treated to 3 or 4 hours of daylight every day, but it had not occurred to me that it could work the other way. One evening approaching Norway I was stunned to see that the sun had only started to go down when we were finishing our late dinner at 11pm. Even when the sun vanished behind the horizon half an hour later, it was what we would still call daylight outside. 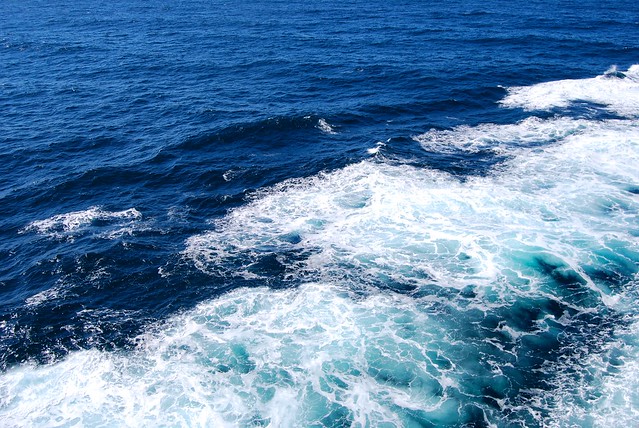 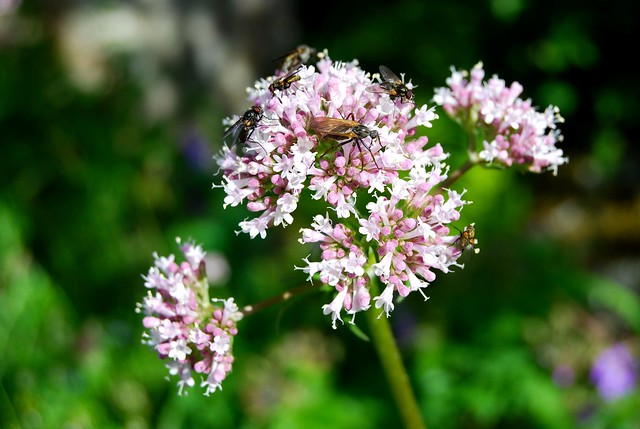 Iceland too, but Norway especially had the most lovely flora. Actually, it was all very similar to what you can find growing in the average English hedgerow, but it all seemed all that vibrant and prolific. And there were some simply beautiful shades of purple (it does not hurt that it is my favourite colour!) 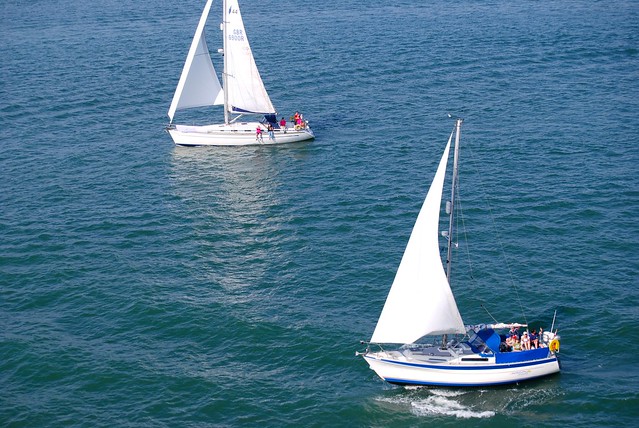 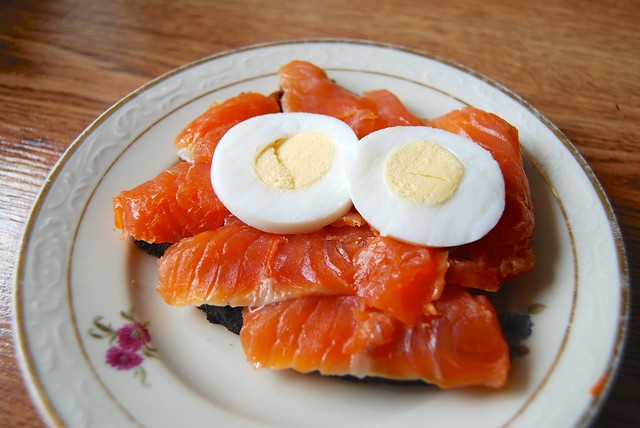 Shall we head to Reykjavík? After spending the morning in the Blue Lagoon I headed off into the centre of Reykjavík in hunt of a bit of an Icelandic luncheon. I started off as a charming little cafe called Gamla/Old Island. Iceland has a wonderful cafe culture, so I decided that I’d eat a different dish in a couple of places. I went for the open sandwich of rye bread, Icelandic butter, smoked trout and boiled egg, that was absolutely fantastic. The locally popular trout was much richer, yet still more delicate than Nordic smoked salmon, and went brilliantly with the fantastically dense, slightly sweet bread. In Iceland they traditionally bake the rye bread in tins buried underground using geothermal energy. It was also fantastic value. I’m not the greatest at maths, so I struggled with the currency, but checking my credit card statement back home I find it only set me back £2.61. A tip for eating abroad, try to stick to local looking rather than tourist places.

Reykjavík itself is such a bright, vibrant young city. It is very pedestrianised, and they have embraced world food with local inflections in places like sushi joints and non-ironic American bars in a wonderful way. With its spas and nightlife, I’d really recommend it for a city bread with friends. American soldiers have been stationed just outside the city, and it is so close to Europe and America, so it has a great mix of both cultures in among the Icelandic. However, which I did manage to find great, cheap eats, it is a little expensive. 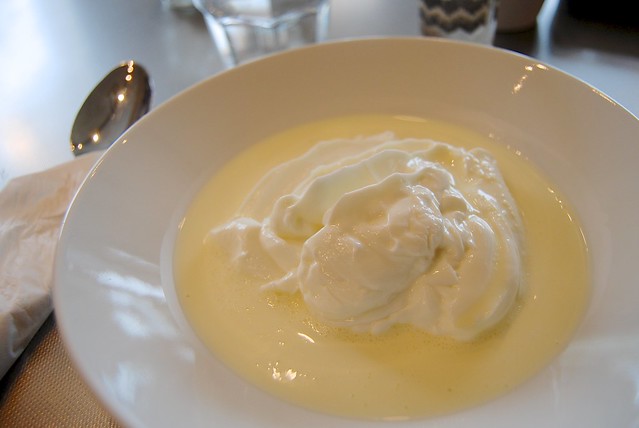 Ignoring the face I’m not really supposed to eat cow deprived cheese products, for my dessert I went in search of Skyr, a yogurt-like by-product of the cheese making process that has been part of Icelandic cuisine for centuries. They use it in everything from smoothies to yogurt like flavoured pots, but I was after it in its traditional form, sitting in a puddle of single cream or milk, and topped off with sugar. Honestly? I only ate about half of it, any more and I’d have made myself really, really sick, but I thought it would be much better served with fruit or something to cut through the cream. It is honestly not that much different from eating low fat greek yogurt. They use it in the same way also, with fish, in flatbreads and the like in everyday cooking. 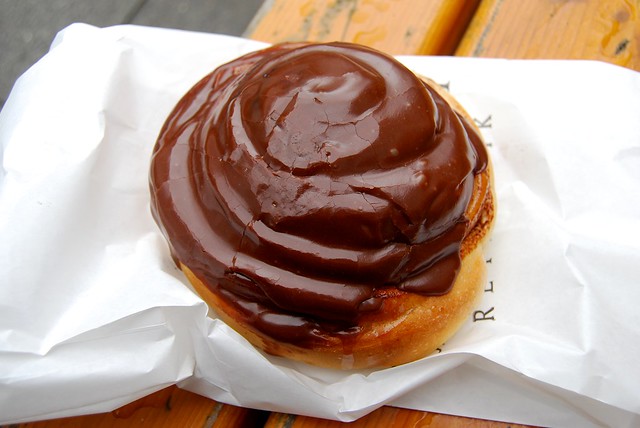 I finished off with a Cinnamon Swirl Bun, which in Iceland is usually topped off with a slightly caramel icing (if you happen to have had a French childhood I have the exact flavour reference for you. It is basically Carambar flavoured icing!) Way too big to eat by yourself, but totally delicious. With my Skry I also had a shot of Brennivín, the green bottled national spirit which is affectionately nicknamed ‘Black Death’. It is an unsweetened botanical schnapps, and it is actually very nice. I can best describe it as tasting like a mixture of vodka (for the hit, and it is made out of potatoes, after all) and gin (for the flavour). 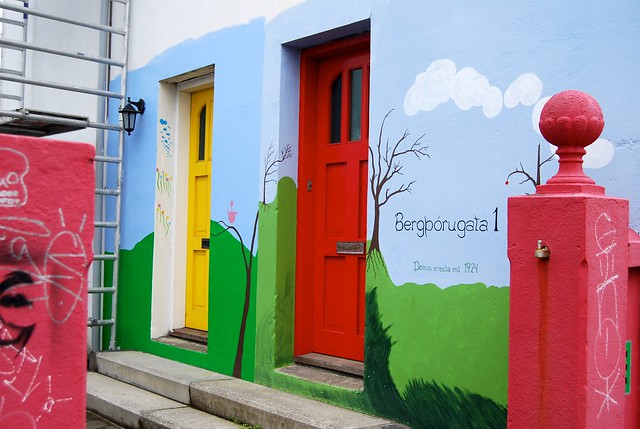 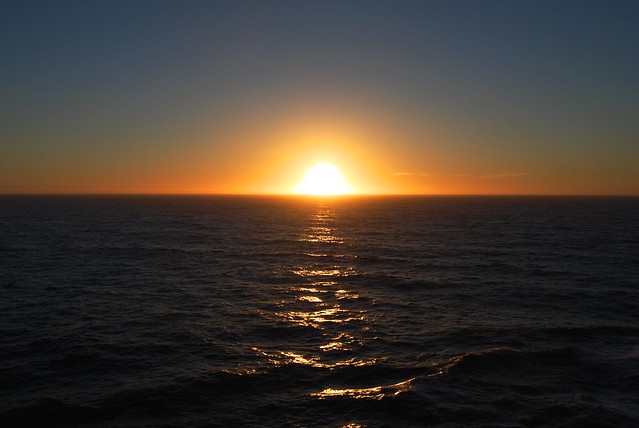 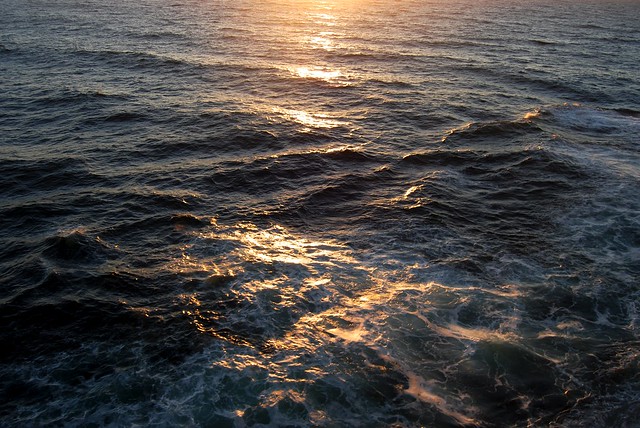 While we only got one or two of them, on account of heading North and everything, I think there is nothing more lovely than a sunset at sea. Just the way you can see nothing but sea and sky for miles, and how it glows. 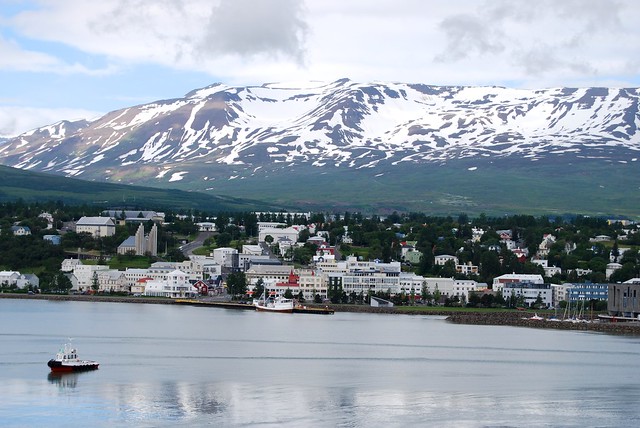 Our first stop in Iceland was actually Akureyri, where we headed out of the port the moment we arrived for our first glimpse of some lava fields, and to visit the famous and very etherial Goðafoss Waterfall. 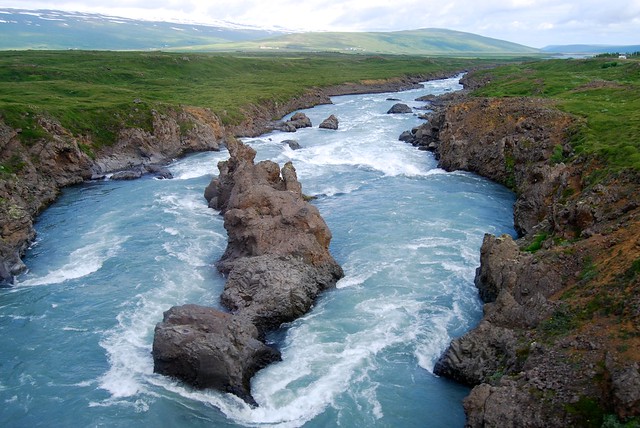 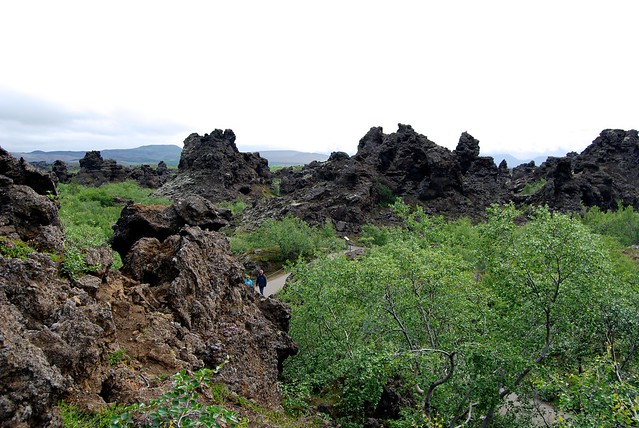 Lava fields are unexpected, but when you actually think about what they are, expanses of land that were once covered in hot magma that has since solidified, they make sense. If you’ve never seen it up close, volcanic rock is like a cross between breeze block and charcoal, with lots of aerated, sometimes shiny bits. If visiting Iceland for the first time you decide that Reykjavík is the right destination for you (it probably is for a first timer), you’ll drive through some pretty impressive ones on your way to the city from the airport (and from the airport to the Blue Lagoon), where they practiced for the moon landings. 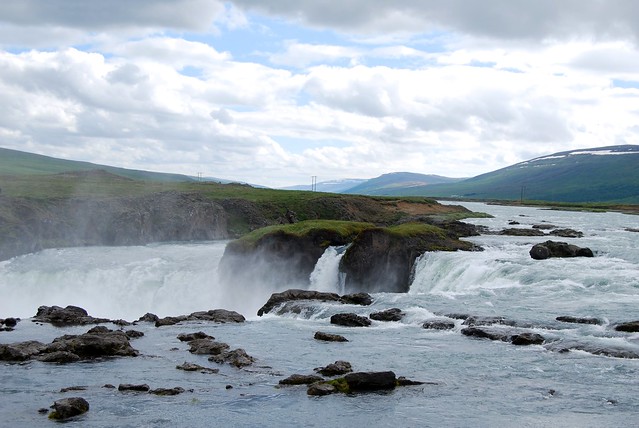 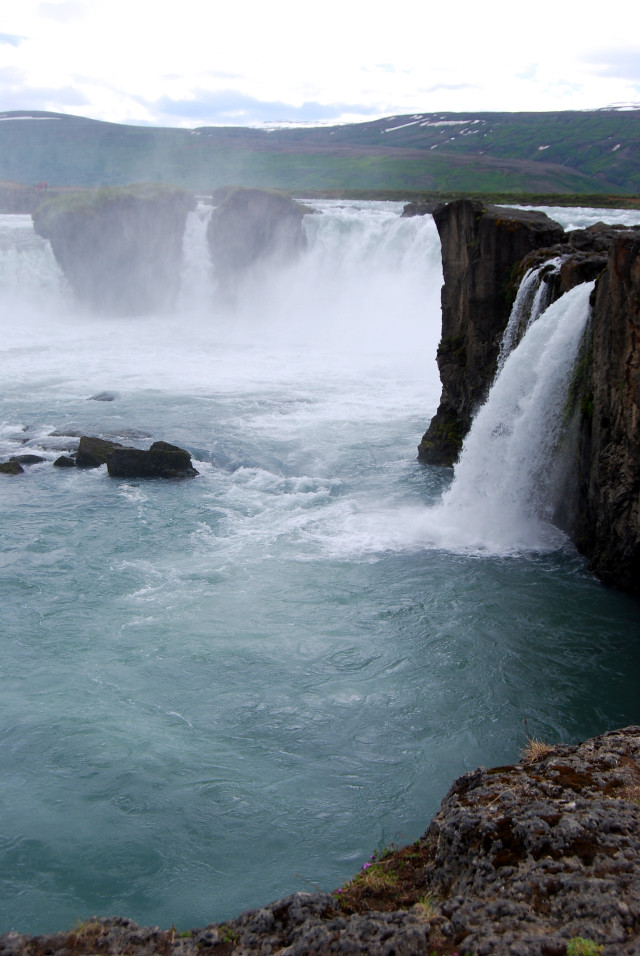 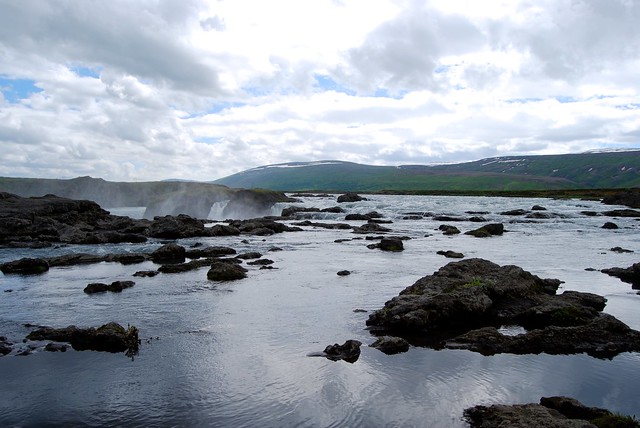 The Goðafoss Waterfall was insanely majestic, but I just wish that I’d been there on a brighter afternoon. The story goes that when the Icelandic tribes of the area voted to adopt Christianity in about year 999, Þorgeir Ljósvetningagoði (try saying that! Also, you’ve got to love copy and paste!), a prominent community leader threw his figurines of Norse gods into the waterfall to renounce the old ways. 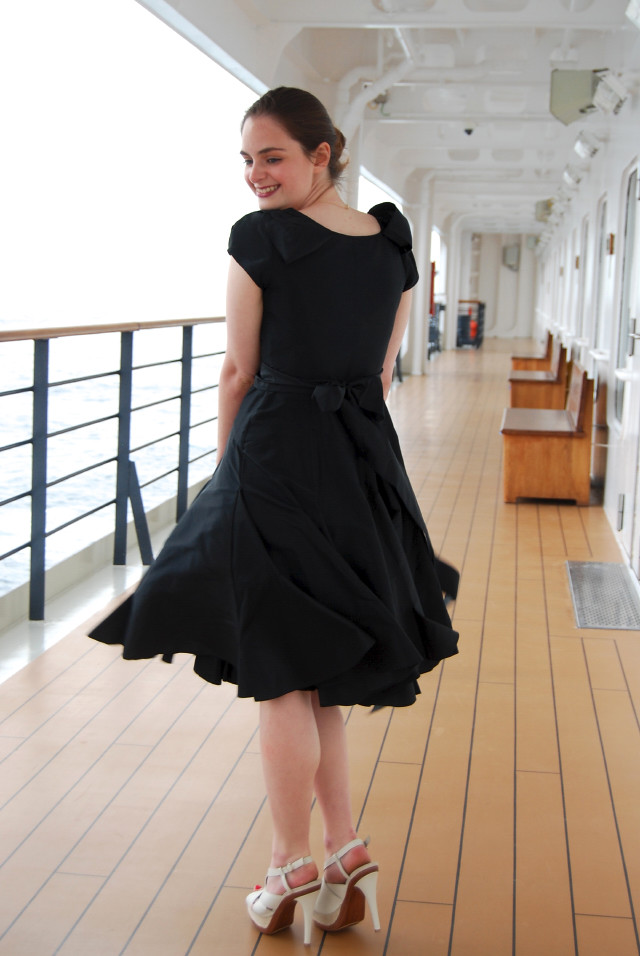 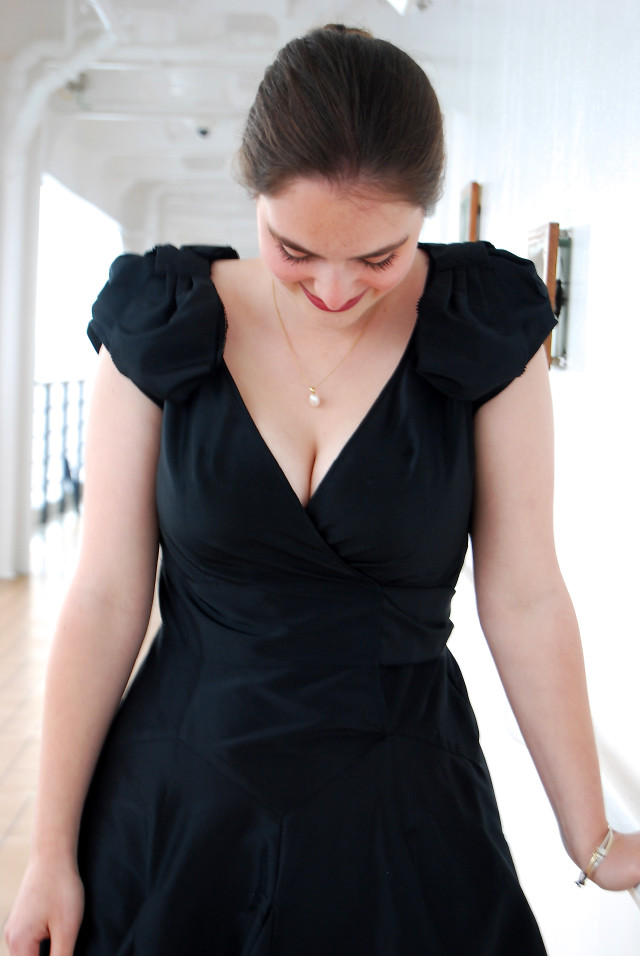 Finally, in the in between days between countries I wore some very pretty dresses to dinner. Unfortunately, the discovery of a rather wonderful cocktail at the bar called a ‘Ginny Hendricks’ (muddled cucumber, mint, elderflower liquor and Hendricks gin) lead to not many pictures of the dresses being taken. However, I did get a few shots of one of my favourites, a fantastic black Diane von Furstenberg gown that is one of my favourite things to wear, and makes the most amazing ruffling sound as I walk. I was en-route to a Black & White ball, so I paired it with my (school) graduation shoes.

I’ve done my best to share with you all just a taster of some of the things I saw during my trip up North around Norway, Iceland and Scotland, but I can promise you words and photos will never be able to do it all justice. You can’t capture in a description or a photograph the spectrum of colours you can see shining across the face of, or the pure majesty of what it is to look up from the foot of the mountain at a glacier. I won’t be able to evoke for anyone who has not seen it for themselves the most incredible shades of blue that are to be found in the waters (lakes, springs and seas) in this part of the world, and while I tried to do it justice, bathing in the Blue Lagoon just outside of Reykjavik is an experience that can’t be replicated. If you ever get the opportunity, I think that how I spent the beginning of my Summer this year is something that everyone should try for themselves at least once in their life. Summing up what I have seen I think would defeat the best of us. 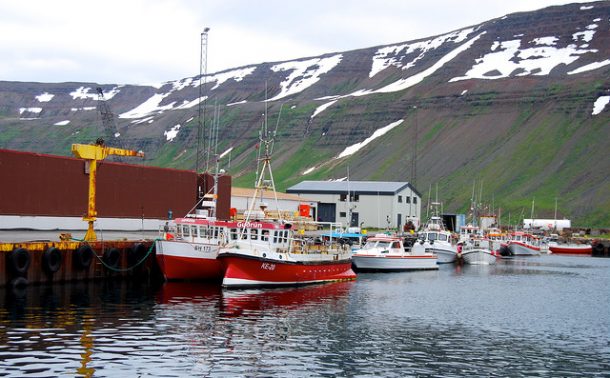 Iceland A Morning In Suðureyri, Iceland’s Most Sustainable Fishing Village 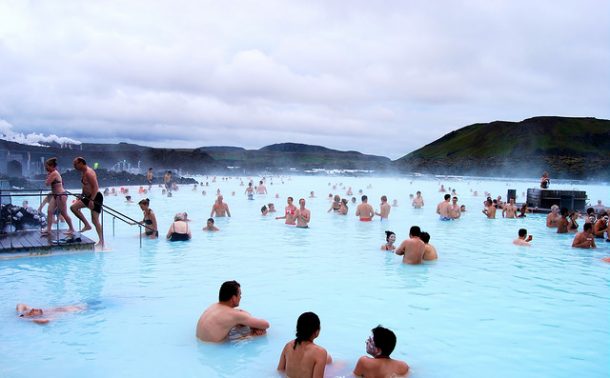 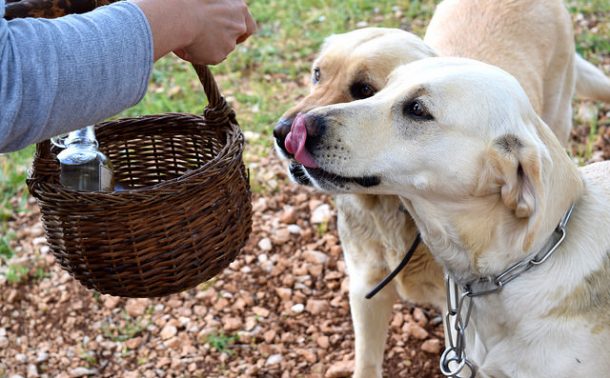