I spent the sunny Bank Holiday weekend in London, and as I was feeling all sunshine I finally got around to starting the final season of Californication, one of my favourite shows. I always thought it was great, but the final two seasons will always have a special place in my heart because so many people think Los Angeles is like how you see it on television, and some of it is, but Californication is the closest I’ve seen to real life LA on screen. It is also shot in my favourite neighbourhood, Venice, and the scenes on Abbot Kinney and shot in Local 1205, (go for the pressed juice in mason jars!) help too. If I ever did want to move back to the city, the area around Rose Avenue or the canals is where I’d want to be. 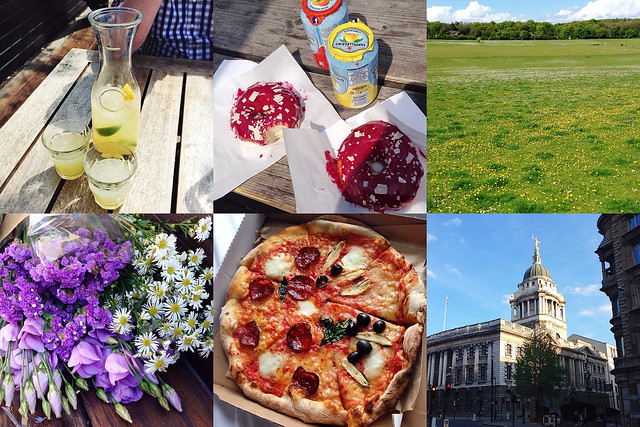 1. Mai Tai pitcher on a sunny Sunday afternoon on The Boundary Terrace rooftop. | 2. Donuts from my favourite Dum Dum Donutterie at Boxpark in Shoreditch (blackcurrant and white chocolate flavour) and Italian sodas in the sunshine with Kristabel. | 3. Carpets of daisies and buttercups in the fields. | 4. Beautiful blooms in my favourite colour I sneakily snapped from the person sitting next to me outside Beagle in Hoxton, no doubt from Columbia Road Flower Market. | 5. Cold pizza supper made for me by the Fundi Pizza guys. | 6. Early evening sunshine illuminating the Old Bailey. 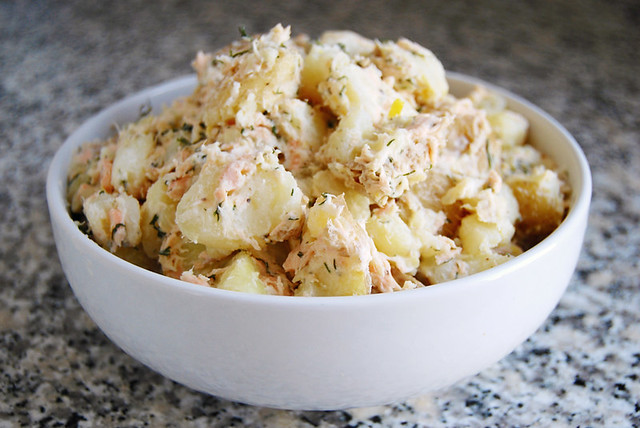 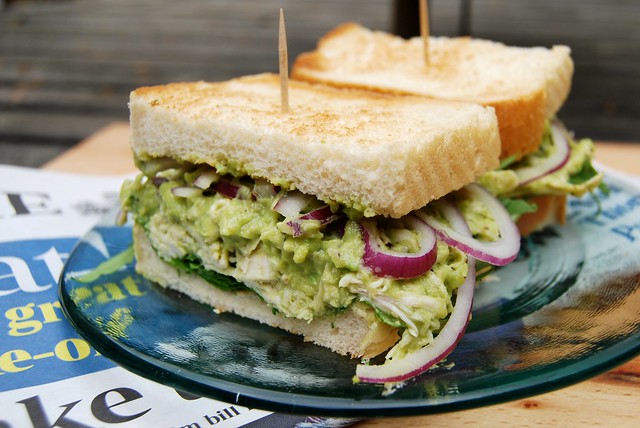 On the Borough Market blog for my second recipe of April (which went online at the beginning of this month instead) I’ve shared a potato salad recipe that I could literally eat forever, and actually amounts to a real guilty pleasure, hot or cold. Think freshly caught salmon sort-of-poached in white wine, and flaked together with oozings of Neal’s Yard Dairy Crème Fraîche (I love this stuff so much that I literally eat it out the tub with a teaspoon while I’m cooking!), and plenty of fresh lemon and dill. Click through for this masterpiece. And yes, I just called something I produced myself a masterpiece, I’m just that proud of it!

Alternatively, if you’re looking for something more traditional for a lunchtime, this week is actually National Sandwich Week. The guys over at Great British Chefs asked me if I wanted to put together a sandwich recipe to celebrate, and I thought it would a a great challenge for my weekend. I’m not really a sandwich person. I eat a fair few of them, but really for convenient and always just with some sort of meat, salad, tomato and cucumber. I never really order them either; the only really great sandwich I’ve ever had out was at The Sycamore Kitchen in La Brea, Los Angeles. So, after a lot of experimentation and brainstorming, click through for my recipe for my Leftover Roast Chicken-Homemade Avocado Mayo Sandwich. I’m particularly proud of the mayo; avocado has enough natural mayo to hold up mayo without the addition of any oil. 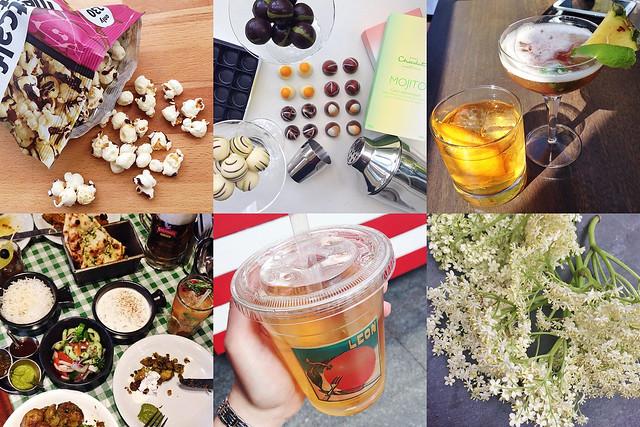 7. Munching on ‘Chocolate Crackle’, my favourite Metcalfes Skinny Topcorn flavour (c/o) while I waited for my Sunday chicken to roast. First time I’d ever roasted a chicken before, and I was rather proud of the results! | 8. Shooting Hotel Chocolat’s new Summer cocktail truffle range for an upcoming feature and giveaway. | 9. Bank Holiday cocktails in the sunshine outside Beagle in Hoxton. | 10. A Sunday night Dishoom feast. | 11. My new favourite quick sunshine sip between meetings is Leon’s Peach White Tea. | 12. Working with fresh elderflowers for the very first time, for an upcoming Borough Market feature. 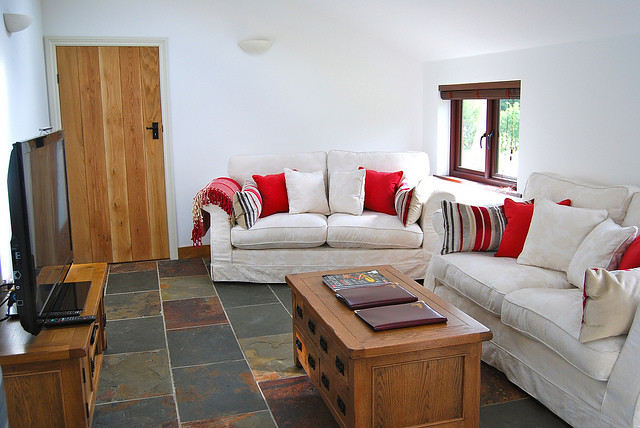 As the title of this post advertised, the luxury holiday cottages company I help run in Kent is now offering 10% off of your stay for all Rachel Phipps readers. If you’d like to book a holiday, or you just have any questions just drop me an email directly and remember to mention that you are a Rachel Phipps reader. You can find out more about Pilgrims Nook, the local area where we are based and look at lots of pictures over on our website.

In other news, how many of you take part in Twitter chats? I’ve never really taken part in one so this is going to be a big learning curve for me, but I’m taking part in my agency Glam’s #GLAMGETSVEGGIE chat on Monday, 3pm. You can find out more over on the Glam website, but it would be great to talk all things veggie food wise with some familiar faces, so if you’re free it would be great if you guys could join in too!

What have you been enjoying this week, and what do you have planned for the weekend? I’m just planning on having a quiet one at home, getting a bit of cooking done (apparently we’re going to get some sunshine here in Kent so we can break out the barbecue for some steaks?) and work on some upcoming projects. I also might head out canvassing ahead of the European Elections on Thursday, which is also my Mummy’s birthday. It does not matter who you vote for, but it is important that you do turn up to vote! 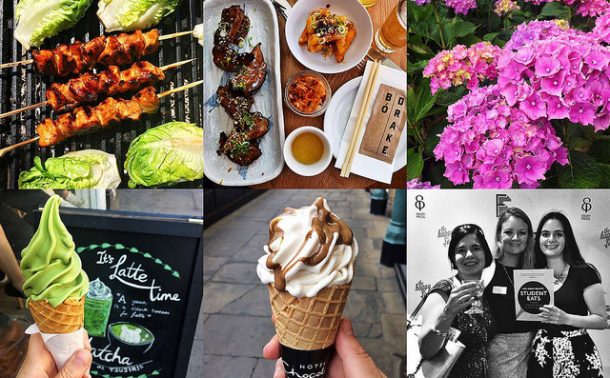 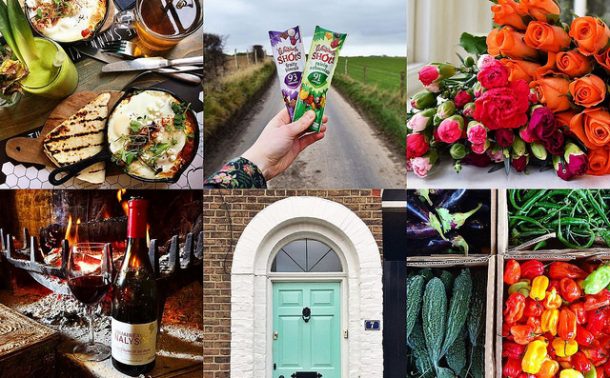 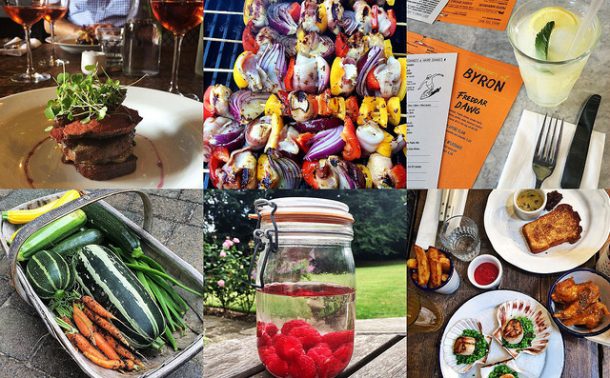